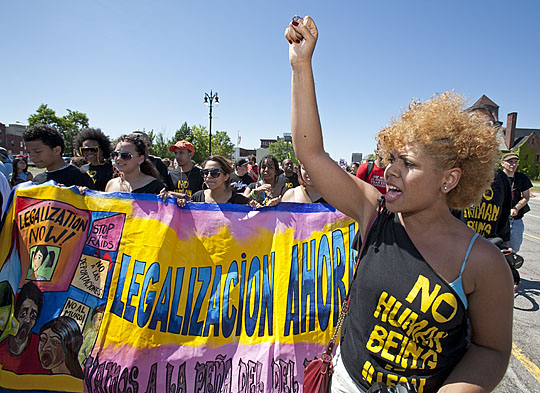 Immigrant rights activists met during the U.S. Social Forum to gear up for a national day of action July 29, the date Arizona’s anti-immigrant law SB1070 goes into effect. SB1070 demands local and state police officers do double-duty as immigration enforcement, checking the papers of anyone they profile as undocumented.

Since the governor signed the law April 23, thousands have been involved in protest actions across the country, including a 100,000-person convergence in Phoenix May 29.

During a four-hour assembly called “Immigrant Rights from Below,” advocates at the forum agreed to support the July 29 action, support young people advocating for the DREAM Act (which would give citizenship rights to children brought into the U.S. without documents), and grapple with advancing immigration reform in an increasingly hostile atmosphere.

Arnoldo Garcia of the National Network on Immigrant and Refugee Rights said there’s “little promise or prospect” for immigration reform from the Obama administration.

“I think Arizona is in the eye of the nation because of the bad laws, but even if Arizona didn’t exist, we’d still be in a bad situation,” Garcia said. Copycat legislation is on the table in a dozen states including Utah, Colorado, Ohio, Georgia, and Rhode Island, and SB1070 is just the most recent in a series of harsh anti-immigrant bills passed in Arizona (see Labor Notes, July 2010).

Activists are encouraged by the outpouring of activity nationwide in response to SB1070.

A DAY WITHOUT PAPERS

According to Pablo Alvarado, executive director of the National Day Labor Organizing Network, a key organization in the pushback efforts, thousands are planning to come to Phoenix July 29 without identification, daring Arizona police officers to enforce the law with all eyes on them. Fifteen buses will come from Los Angeles alone, he said.

Jane Slaughter: Union Troublemakers Meet Agitators for Every Cause Under the Sun at Social Forum

Momentum for the demonstration has been high, with 30 days of actions planned in Arizona in the lead-up. Nationwide, activists have been picketing wherever the Arizona Diamondbacks play, to pressure Major League Baseball to move the 2011 All-Star game out of Arizona and to call attention to the Diamondbacks CEO’s support of anti-immigrant lawmakers. A picket was organized July 9 at MLB headquarters in New York, and activists demonstrated against Arizona Governor Jan Brewer at a National Governors Association meeting in Boston.

An economic and cultural boycott of the state has made some impact: performers such as Kanye West, some cities, and multi-million-dollar conventions have refused to hold events or do business with the state. Phoenix Mayor Phil Gordon estimated a loss of $90 million to the city in the next five years if the boycott continues.

“People understand if we don’t stop these attacks in Arizona, it will spread all over,” said Alvarado. He said that while NDLON and other organizations have helped to coordinate the national days of action, other protests have sprung up on their own.

In May, some activists announced new boycott targets: Anheuser Busch, Frito Lay, and Jimmy John’s sandwich restaurants, because of their ties to the state, but there seems to be little traction for these secondary campaigns.

On July 6 the Department of Justice sued Arizona over SB1070, claiming the state had overstretched its rights. While some activists cheered the lawsuit and its potential to topple the law, Garcia remained cautious, saying the suit is based on questions of federal authority, not on the law’s implications for racial profiling.

A version of this article appeared in Labor Notes #377, August 2010. Don't miss an issue, subscribe today.
Related
Troublemakers Schooled in Detroit and Philly »
Detroit Postal Workers Push to Dump DeJoy and His Ten-Year Plan »
Detroit Bus Drivers Win Protections Against Virus Through Strike »
GM Workers Ratify Contract Though 'Mixed at Best' »
GM Contract: 'Not What We Struck For' »