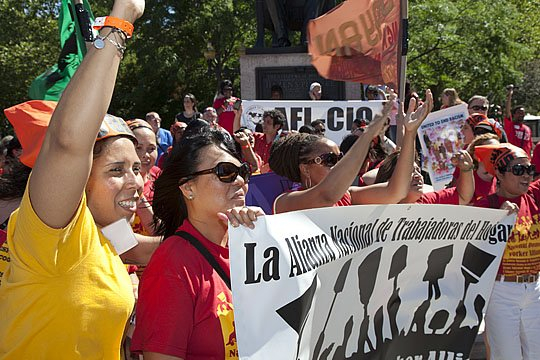 Women from the National Domestic Workers Alliance were part of an opening day march at the U.S. Social Forum that had thousands in the streets of Detroit. Photo: Jim West

The U.S. Social Forum proved to be a place where union troublemakers could meet up with agitators for every other cause under the sun. Organizers say 15,000 people registered for the five-day event, which hosted 1,000 workshops in downtown Detroit.

It was not so much a conference as a place to learn and to connect with others working in similar movements or different ones. There was no big outcome, but hundreds of smaller ones. The connecting glue was a belief, as the organizers said, in “people over profits, and valuing everyday actions over the pontifications and plans of politicians and corporate leaders.”

The June 22-26 event was exhilarating because of the presence of so many dedicated activists with high energy levels. They not only talked but marched through the streets, taking up Detroiters’ causes as their own: city residents demanding the shutdown of a polluting incinerator, AFSCME city workers fighting furloughs, farmworkers targeting Chase Bank, restaurant workers protesting wage theft.

Jane Slaughter: Union Troublemakers Meet Agitators for Every Cause Under the Sun at Social Forum

The Auto Workers and Steelworkers sponsored workshops, but it seemed only the United Electrical Workers (UE) and Illinois SEIU locals turned out their members in numbers. Jobs with Justice filled that gap, foregoing its own conference this year and bringing 350 people from around the country.

There was plenty to discuss in the world of work: fighting for fair food with the Coalition of Immokalee Workers; saving manufacturing, with the Steelworkers; stopping wage theft with Interfaith Worker Justice; rights for domestic workers; new rules to make trade deals a tool for global justice; re-purposing auto factories to build renewable energy infrastructure.

Jobs with Justice chapters discussed immigrant workers and labor (Rhode Island), the struggle for single payer under Obamacare (Portland, Oregon), and a campaign for good jobs for all (national). The UE put its unique stamp on the gathering, with workshops on plant occupations and what makes for a successful international labor solidarity campaign.

Beyond that, there was a rich mix on offer. You could learn how to start a “Raging Grannies” group; defend free speech on campus; self-publish a radical comic book; become skilled at facilitation or “strategic messaging”; organize on a shoestring; form a radical street band; build Arab and Black solidarity; understand the Tea Party; “respond to an amnesiac culture with grassroots social history”; start a timebank to share services in your community; understand Islam; help a soldier quit the Army; learn how “modist” transportation policymakers discriminate in favor of cars; blog underreported stories; end mountaintop removal; and learn the roots of the economic crisis.

If there were half as much enthusiasm, creativity, and good will in the labor movement as was shown by Social Forum activists, we probably wouldn’t be at 12.3 percent union density. And the other movements need labor’s inherent strength to lend them clout.

Is joining forces too much to hope for?

A version of this article appeared in Labor Notes #377, August 2010. Don't miss an issue, subscribe today.
Related
Troublemakers Schooled in Detroit and Philly »
Detroit Postal Workers Push to Dump DeJoy and His Ten-Year Plan »
Detroit Bus Drivers Win Protections Against Virus Through Strike »
GM Workers Ratify Contract Though 'Mixed at Best' »
GM Contract: 'Not What We Struck For' »