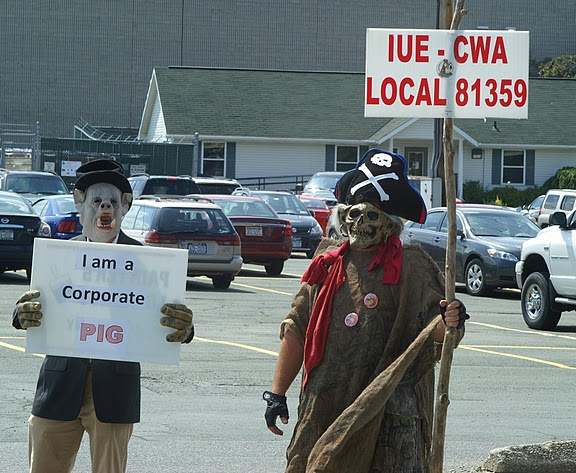 In a development that has many in the Capital District of New York’s labor community scratching their heads, workers at a chemical plant that mobilized for a year against wage cuts saw their new contract ratified despite voting against it.

About 500 workers represented by IUE-CWA Local 81359 were seeking to recover from unilateral pay cuts imposed by Momentive Performance Materials in late 2008.

The workers, who make silicone products, were hit with illegal 25 to 50 percent pay cuts mid-contract, while members of other unions at the plant were spared. Since then, the local, led by President Dominick Patrignani, has campaigned relentlessly both on its own behalf and in support of the struggles of other unions in the region.

The local joined area labor councils for the first time and eventually attracted significant support from labor activists in the area. The campaign climaxed with a big bargaining sendoff picket and rally in early June.

Three unions were involved in the contract vote. The two others were a small unit of lab technicians in the Momentive plant and a small local from Ohio in the company’s quartz division. The two small locals—whose pay was not cut—combined with enough votes from Local 81359 members to put the contract over the top 388-337.

The Local 81359 members had on average $30,000 in back pay riding on the settlement. At information meetings held before the vote, an IUE-CWA attorney told workers they risked delaying the payout for up to five years by rejecting the deal—a threat that workers heavily criticized.

IUE national President Bob Clark hailed the agreement. “It is never easy to adjust to a new owner with a different structure and different needs,” he said in a statement. “But this contract does give members a pathway to put the acrimony behind us and rebuild.”

Patrignani had a more sober assessment. In a letter to members he said the contract was “a tough pill to swallow,” noting that pension and medical costs would climb and the lower wages would now be locked in, as the union gave up its NLRB suit to gain the agreement.

While production workers received $2 an hour wage increases, they did not get their old pay scale back, leaving them still far behind where they were in 2007. Senior workers at the plant previously made as much as $30 an hour.

“I wish we could have resolved this differently, but this is the path the majority has decided to take,” Patrignani wrote.

There is little question that Momentive’s willingness to pay back the wage cuts in a lump sum was tough for many to turn down.

Many who were attracted to this aspect of the agreement were close to retirement. The “no” vote came largely from the production workers, whose pay scales were not restored, along with a large portion of the local’s maintenance workers—whose pay was not cut, but who have stood in support of the production workers despite Momentive’s effort to drive a wedge between the groups over the past 18 months.

The new activism of Momentive workers may survive the disappointment many of them feel about this outcome. Suspicions remain that the wage-cutting at Momentive is meant to match the non-union wage scale at the new Global Foundry chip fabrication plant nearby—a ripe organizing target for that activist energy.

Jon Flanders is a member of Machinists Local 1145 and of the Troy Area Labor Council.