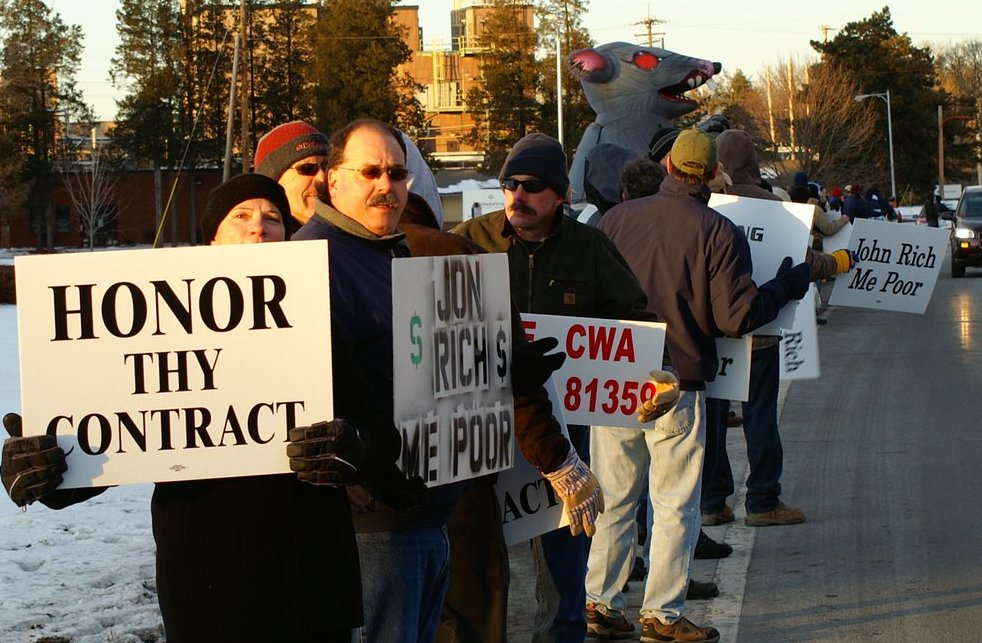 Chemical workers at Momentive in Waterford, New York, fought a losing battle against drastic wage cuts in 2010. This time they roundly rejected the company's deal and are gearing up for a showdown. Photo: Jon Flanders.

Fourteen ballots were disqualified because “NO” was scrawled on the outside. But it didn't matter—the vote was overwhelming. Members of IUE-CWA Local 81359 rejected a one-year extension of their contract, which expires in June, despite the intensive in-plant meetings that Momentive management organized to push for the deal.

“Then I started looking back at what they did to us three years ago,” Farina said. “They violated our national contract, eight major violations, the main one being failure to negotiate in good faith, and I started thinking about it more and more, and you know what? I don't think I can trust anything they tell me.”

There is speculation that the opening of a Momentive plant in China lies behind management’s interest in a contract extension. An extra year without a showdown in Waterford would have given the Chinese plant time to ramp up production and potentially undermine any industrial action in the U.S. in 2014.

Labor Notes readers may remember that the chemical workers of Local 81359 fought a losing battle against wage cuts a few years ago.

Momentive executives approached the union in early 2008 saying they needed to transform the business. The private equity firm Apollo Management had just taken over the plant from GE. They sought steep wage cuts and outsourcing, especially of jobs where veteran workers were employed.

Local 81359 offered many ideas to save the positions, including work area flexibility, fewer supervisors, and lower starting wages for new hires—all to no avail. Management imposed the cuts unilaterally, violating the contract. But by this time the economy had crashed and orders were way down, leaving the local little leverage.

When the next contract came due in 2010, management’s offer didn’t rescind the cuts but offered big lump sums. The local narrowly voted it down, but the votes of two smaller Momentive locals not affected by wage cuts (technicians in Waterford and quartz products workers in Willoughby, Ohio) were enough to put the contract over the top 388-337—leaving 400 Waterford workers still suffering pay cuts that in some cases approached 50 percent.

This year, the landslide of “no” votes in Local 81359 made the votes of the small locals irrelevant, though they passed the extension. The final tally at 81359 was 64 for extending the contract, 467 against.

“I am so proud of my members for standing up and fighting back!” said President Dominick Patrignani.

Patrignani, the executive board, and the members have put together proposals that would go a long way toward amending the hatred and disparity left in the plant by the 2010 contract. They are determined to use the fact that economic conditions for the industry are relatively favorable.

Momentive workers are gearing up for a showdown that will test the resolve of both labor and management. IUE-CWA 81359 members are now familiar sights at area picket lines—which has created favorable conditions for labor solidarity in the Capital District. Activists in the Troy Area Labor Council and other councils in the Capital District Area Labor Federation plan to pitch in for a serious contract campaign this spring.

Jon Flanders is a member of Machinists Local 1145 and of the Troy Area Labor Council. IUE-CWA is the Industrial Division of the Communications Workers.