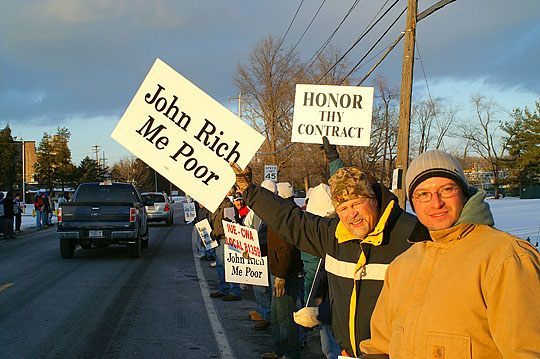 When the private equity firm Apollo Management took over GE’s Advanced Materials plant in 2007, local labor activists were apprehensive about what might be in store for the 600-plus workers there.

Headed by Leon Black, a notorious graduate of the infamous ’80s Drexel Burnham Lambert school of leveraged buyouts, Apollo has a background of buying up “distressed” properties and “restructuring” them, which usually means workers take the hit in wages and pensions.

Things under the new boss started out nice enough. The company, whose silicone products are caulks, adhesives, foams, cosmetics and tires, re-branded as Momentive Productive Materials. It negotiated a new three-year contract in 2007 with the chemical, maintenance, and warehouse workers represented by IUE-CWA Local 81359 that locked in gains in pay and pensions and retained key job security provisions.

Workers in the Waterford plant, about a dozen miles north of Albany, New York, inherited the almost $30-an-hour wages and decent working conditions that had been fought for by generations of union families, going back to the great days of the CIO in the 1930s.

Then the hammer fell. With the contract signed and in place, Momentive executives approached the union in early 2008 saying they needed to transform the business. Months before the economy crashed, they sought wage cuts and outsourcing of warehouse work, plant labor, and heavy equipment operation, where many of the veteran workers resided.

Local 81359 offered many ideas to save the positions and prevent outsourcing, including work area flexibility, fewer supervisors, and lower starting wages for new hires.

“We did the math for them, showed them all types of business models,” said Dominick Patrignani, the local’s president. “But they had it all figured out ahead of time.”

WAGES CUT IN HALF

In late 2008 the company announced that production workers’ pay would be slashed by 25 to 50 percent. The announcement came just as the recession hit, leaving the union with little leverage to hit back in a plant that suddenly had very few orders. Local 81359 counter-offered an equal percentage cut across the board, as long as everyone from the CEO down did it together.

There have been no moves to restore the pay cuts for production workers.

Instead, Momentive outsourced 43 jobs to non-union workers at $12 an hour, illegally changed job classifications to pile on work for the survivors, and started a job-posting system that decimated members’ mobility based on seniority.

The union leadership filed a National Labor Relations Board complaint over the pay cuts for 400 production workers. Skilled maintenance workers were not affected, nor were 70 technicians at the plant represented by another IUE local—the essence of divide and conquer.

The NLRB will hear the case in July. Local 81359’s contract expires in June, creating a complicated scenario for the local’s leaders to navigate.

WAKE UP CALL FOR UNION

Patrignani said the pay cuts were a “huge wake-up call.”

Workers initially expressed their outrage on an Albany Times Union blog, which has drawn thousands of angry comments.

But they’ve broken out of the online world—and the traditional insularity of big IUE unions. Patrignani and his stewards have been ubiquitous on picket lines and labor events in the Capital District of New York. The local has joined virtually every labor council in the area, with particular emphasis on the Troy Area Labor Council, which in response voted to make the Waterford workers’ struggle against pay cuts its major campaign for 2010.

Labor council leaders helped Local 81359 put out a flyer against the wage cuts over the holidays, which was distributed to thousands.

When the hotel workers of Workers United Local 471, who have been on strike for recognition at the Holiday Inn Express in nearby Latham, held a rally in the last days of January, a busload of Momentive workers joined them. IUE members have been faithfully participating in weekly pickets at the hotel for a year.

“For years we’ve been living in the GE world,” Patrignani said. “It was like therapy helping others fighting for the right to unionize. We started to realize how good it could be for all of us to stand together and fight back. There’s so much knowledge out there.”

The local and the Troy Area Labor Council sponsored a meeting March 31 to hear labor activist and author Steve Early discuss contract bargaining in tough times. More than a hundred Momentive workers and supporters came and a big brainstorming session broke out, which left the participants ready to take up both the Momentive workers’ battle and others developing in the region.

With the contract expiration and NLRB hearing looming this summer, the local is building momentum, discussing both how to prepare for a possible strike and how to carry out in-plant strategies.

Members are experimenting with a work-to-rule, doing exactly what the contract states and requiring engineers and supervisors to make decisions and corrections to process and work flows that were done in the past on the floor by the true experts, the union workers.

Jon Flanders is a member of IAM Local 1145 and of the Troy Area Labor Council.