Orchestras Face a Season of Lockouts 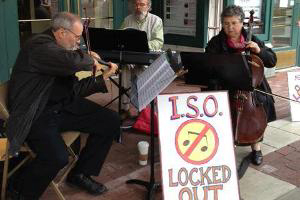 Orchestra managements are resorting to lockouts to try to force big pay cuts, with four just this fall. A trio from the Indianapolis Symphony Orchestra performs outside the Hilbert Circle Theatre after their management locked them out, seeking a 32 percent pay cut. Photo: AFM Local 3.

Earlier this year the New York Times reported that America’s unionized workers face a “phenomenon that is increasingly throwing them on the defensive: lockouts.”

Symphony orchestra musicians are no exception.

Just this fall, the musicians of the Atlanta Symphony, the Indianapolis Symphony, the Minnesota Orchestra, and the St. Paul Chamber Orchestra have been locked out and their communities deprived of music. Even more orchestra lockouts may be coming.

While orchestras are nonprofit organizations, management’s behavior looks a lot like the for-profit world. Executive compensation is rising, worker pay is decreasing, and managements are becoming more aggressive in negotiations, resorting more frequently to lockouts.

From their behavior, you’d never know that purely from an economic standpoint, the arts are still good business. According to Americans for the Arts, the nonprofit arts and culture industry accounts for over $135 billion in economic activity every year and leads to over four million full-time jobs for Americans. In many of our cities, symphony orchestras (along with opera and ballet) are the most prominent performing arts organizations, and the most visible ambassadors for the community.

While the recession had an impact on all Americans, and certainly on philanthropic giving, many orchestras are still seeing increases in donations, ticket sales, and attendance. The St. Louis Symphony, for example, just experienced its best fundraising year in a decade.

City governments and business leaders are quick to invest in performing arts centers, recognizing that when symphony concerts take place, business occurs downtown. Restaurants have waiting lists, cab drivers work, parking lots are full, and post-concert cafes and bars are filled with arts attendees. Everyone benefits, even if they never attend a concert themselves.

But it makes no sense to invest in buildings without preserving the institutions that live there. In Minneapolis, the management of the Minnesota Orchestra is proposing a $40,000-a-year pay cut per musician, even as it spends more than $50 million on renovating the lobby of its concert hall.

Unprecedented, aggressively anti-union tactics from symphony managements and boards have forced orchestra musicians to accept cutbacks in many places. The musicians of the Indianapolis Symphony, for instance, just ended their lockout by accepting a 32 percent pay cut.

Even though the artists of America’s orchestras are considered among the best in the world, their boards and managements now seem to view musicians as replaceable parts. “The commoditization of symphony orchestra musicians,” Chicago-area attorney Kevin Case recently called it.

When the board of the Louisville Orchestra shut down that world-renowned orchestra for an entire season last year, management actually put out ads on Craigslist for new musicians. The managers did so with no apparent shame, not seeming to recognize how they were endangering the community’s investment in one of the city’s most recognizable assets.

But the effort to replace the musicians was a failure, in part because the International Conference of Symphony and Opera Musicians—ICSOM, a division of the American Federation of Musicians union—led a worldwide effort urging musicians everywhere to refuse work with the organization until the orchestra’s original musicians were returned to the stage.

Such cuts in the “product” are shortsighted on the part of boards and managements, as orchestras depend on the ability to attract and retain the finest musicians in order to fulfill their missions.

Nonprofit arts organizations and orchestras do not exist to balance their budgets. They exist to serve the community for the greater good, and to perform great music at the highest level. The musicians of America’s orchestras spend countless hours each day teaching music to our next generation, giving children tools that will enhance their cognitive ability and even their health well into their seventies, studies have shown. An organization needs financial stability to achieve its mission, of course—but finances are not the measure of success for a nonprofit arts institution.

While union membership has decreased in our country, that isn’t true for orchestral performers. Orchestra musicians are overwhelmingly members of the American Federation of Musicians, even in right-to-work states. The musicians of ICSOM perform for our audiences in a spirit of solidarity and support each other through a network of friends.

Attendance at our concerts is rebounding from the depths of the recession. Indeed, it is a testament to the viability of America’s orchestras that so many have withstood the barrage of negativity unleashed upon us by our managements. While the media tends to focus on orchestras that are facing conflicts, the true story to be told is that so many of our orchestras have done so well during the worldwide economic downturn.

America's orchestras can endure to serve the next generation of Americans, as economic engines and as cultural ambassadors to the world. But their survival will require the support of musicians around the globe and families who value education, as well as a message of hope about the value of investing in music for all citizens.

Bruce Ridge is Chair of the International Conference of Symphony and Opera Musicians and is a bassist with the North Carolina Symphony.

A version of this article appeared in Labor Notes #404, November 2012. Don't miss an issue, subscribe today.
Related
Employers Are Using the Crisis to Push Concessions They Don't Need »
Rest in Power, Anne Feeney (1951-2021) »
Return of the Lockout: Uber and Lyft Try to Strong-Arm California »
Turn the Tables: Demand Concessions from Your Employer »
Maine Shipbuilders Bring the Hammer Down, Reject Concessions »