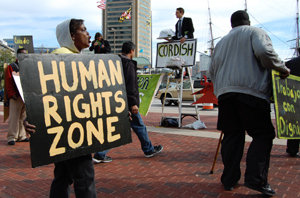 “Just because these are ordinary practices doesn’t make them tolerable,” said Luis Larin, an organizer with United Workers, a worker center founded in 2002 by homeless day laborers. It is intent on turning the retail zone, home to 1,000 service workers, into a “human rights zone.”

United Workers’ strategy is to target the developers who control the Inner Harbor, pursuing a legally binding agreement with each one. The agreements will mandate, through the leases between the developers and their vendors, that all employers at the property pay at least the Maryland state living wage—$12.25—and treat workers with respect.

Committees at each workplace are articulating employer-specific issues, and a cross-workplace council is drafting an overall “code of conduct” to be hammered out in talks with the developers.

The vendors, including Cheesecake Factory, ESPN Zone, Barnes & Noble, and M&S Grill, are mostly national brands that depend on favorable consumer perception.

United Workers took a page from the book of the Coalition of Immokalee Workers, in Florida, after meeting with farm workers there. The Coalition won higher wages for tomato pickers by organizing boycotts of big chains like Taco Bell. Said Larin, “We’re bringing our demands to the top of the development chain”—going to the top of the economic ladder rather than one rung up.

United Workers launched the Inner Harbor campaign in late 2008, building on its victory at the Camden Yards baseball stadium a year prior, where cleaners won a living wage. Workers marched from the stadium to the Inner Harbor, planting a symbolic flag on the development to declare it a “human rights zone.”

Since then, they’ve been mobilizing around a living wage, health care, and a subsidized education program to improve skills.

Last spring, 700 workers and allies from 40 community organizations marched against Phillip’s Seafood, a restaurant that United Workers had identified as the worst employer in the Inner Harbor. Workers say Phillip’s not only required workers to purchase a company cup to drink water but also forced them to work while ill. Some actually threw up in between taking food to customers. Larin says management threatened to shut down if workers continued to organize.

United Workers then switched gears and moved up the food chain, shifting the focus to development companies Cordish Co. and General Growth Properties. They are demanding that developers fund health care and education programs for workers and their families. “These agreements would put developers on the side of justice,” says Dominic Washington, a worker at the Inner Harbor.

United Workers is broadening the fight by launching a campaign for “fair development”—a model stressing sustainability through fair treatment for workers and greater decision-making by the community. At its next major action, set for May Day, workers and community allies will march under the fair development banner of “Our Harbor Day.”

Allies from labor organizations and other social justice groups will bring together a cast of hundreds for street theater, live music, and neighborhood parades—emphasizing a new vision shifting from private profit to public benefit.

Larin says the “economic human rights agreement” his group seeks is similar to the community benefit agreements that many local coalitions nationwide have won. They typically link public subsidies for a stadium or new development to local hiring, neutrality in union drives, and other community demands.

But unlike those agreements, the timing of the Inner Harbor conflict is on the community’s side, since no permit or construction timetable is driving the process. Leverage, instead, will come from connecting consumers to the campaign.

No plans are in place for a boycott at this time, but leverage can still be achieved through participatory public actions and pressure applied to politicians (who promised better economic benefits from the development)—along with all kinds of disruption.

The focus will stay on the two developers who control Inner Harbor, however, until every underpaid worker is covered by a legally binding agreement. United Workers spends most of its time on outreach, at home visits, and in meetings with members. “Out of the process comes a community of leaders,” Larin says.

After Our Harbor Day, United Workers will roll out a series of tours to other Cordish and GGP properties beyond Maryland, letting people in other cities know about the poverty-zone practices of these two developers.

Tom Kertes, a former leadership organizer for United Workers, is a childcare worker and community organizer in Vancouver.