Boston-area Workers to March and Rally against "Jobless Recovery" 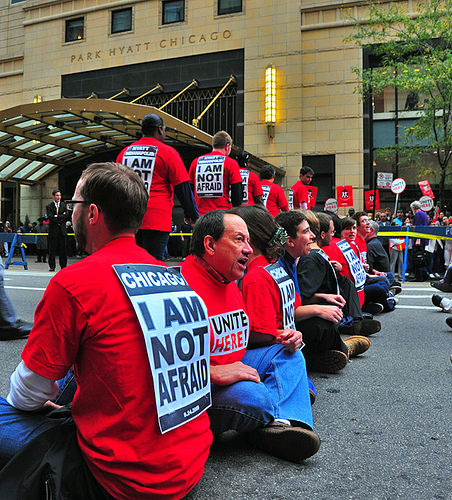 Hundreds of UNITE HERE members and supporters were arrested in Chicago during protests of Hyatt. The hotel chain fired 100 housekeepers in Boston, replacing them with subcontractors making $8 an hour. Photo: Zacharay Lee Kay

With the Massachusetts jobless rate now at 9.1 percent and rising, workers are increasingly frustrated by employers exploiting the recession to attack them, and the failure of politicians and policy makers to address the growing jobs crisis.

"Taxpayers poured billions of dollars into banks that were 'too big to fail,'" said Alexandra Pineros-Shields, board member of Jobs with Justice. "Then the banks gave outrageous bonuses, foreclosed on people's homes, gouged consumers, and spent millions to lobby against new laws that would hold them more accountable."

With the Massachusetts AFL-CIO, the Greater Boston Labor Council, Jobs with Justice, and the support of more than 75 union and community co-sponsors, thousands of workers will march and rally on October 1 demanding that corporations be held accountable.

Universities like Harvard are sitting on fat endowments (still $26 billion, even after the stock market collapse), and hospitals like Boston Medical Center are making cuts while paying their executives millions. Banks are stalling loans on important construction projects.

And profitable companies like Verizon and Hyatt are using the current recession as an excuse to cut jobs.

The march will kick off on October 1 at the Boston Common at 4 p.m. and proceed to stops at the Hyatt Hotel, Bank of America, and Verizon's Franklin Street headquarters. The march finishes at the Federal Reserve Bank for a short rally at about 5:30 p.m.

Three Hyatt hotels in Boston gave 100 housekeepers the boot in late August, replacing them with workers hired through a Georgia subcontractor. The hotels plan to pay new workers $8 an hour and no benefits. The fired workers, including some with more than 20 years on the job, were earning up to $15 an hour with health benefits.

Though they weren’t union, they gained the support of the hospitality union UNITE HERE, which has organizing drives underway at Hyatt hotels nationwide. Boston-area hotel workers, community supporters, and politicians gathered in the hundreds to picket the three locations.

Hyatt’s shift to outsourcing is unprecedented in the hotel industry, and could cause the company serious headaches. UNITE HERE called for a boycott, and solidarity pickets went up at Hyatts across the country.

"Far too many profitable companies like Verizon and Hyatt are exploiting the recession to cut their headcount and further boost profits," said Richard Rogers, head of the Greater Boston Labor Council. "It is absolutely unconscionable."

Because corporations don't pay their fair share in taxes, state and local governments are slashing critical public services and eliminating jobs, just when demand for public services is exploding.

October 1 is the one-year anniversary of the Bush administration's bail out of the banks and insurance companies. The government gave these companies hundreds of billions of dollars with little or no accountability.

"Despite signs that the economy is improving, everyone knows it's a 'jobless recovery,'" said Robert Haynes, president of Massachusetts AFL-CIO. "The official numbers don't reflect reality. We need jobs now."

The march will kick off on October 1 at the Boston Common at 4 p.m. and proceed to stops at the Hyatt Hotel, Bank of America, and Verizon's Franklin Street headquarters. Everyone will end up at the Federal Reserve Bank for a short rally at about 5:30 p.m.
Related
Employers Are Using the Crisis to Push Concessions They Don't Need »
Economics Brief: The Rise in Income Inequality in the United States »
We Need a Disability New Deal, Too »
Turn the Tables: Demand Concessions from Your Employer »
Maine Shipbuilders Bring the Hammer Down, Reject Concessions »