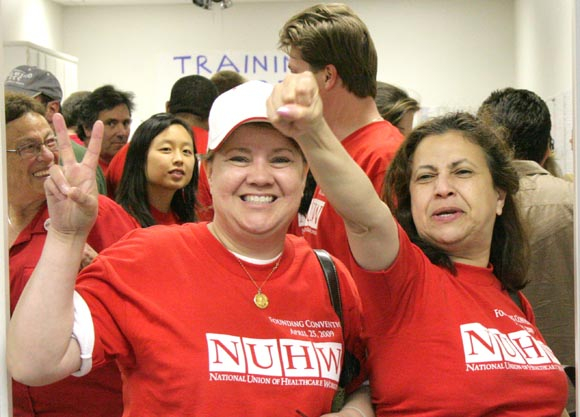 Martha Johnson and Carmen Curi were two of many health care workers who came to Fresno to go door to door urging homecare workers to vote for the new National Union of Healthcare Workers. Photo: Sadie Crabtree.

Editor's note: When the SEIU International trusteed the giant United Healthcare Workers-West local in California in January, UHW leaders and members vowed to form a new union. They set about asking members to vote in the National Union of Healthcare Workers (NUHW) instead, turning to a unit of 10,000 homecare workers in Fresno County, California.

NUHW narrowly lost the Fresno vote in ballots counted June 19. The new union's leaders are calling for a re-run, citing what they call illegal intimidation tactics. Although questions remain about irregular or late ballots, the unofficial vote count as of June 23 is SEIU 2,938, NUHW 2,705, or 52-48 percent (plus 136 for no union).

Ironically, SEIU trustee Dave Regan had exhorted campaigners before the vote, "This is not an election that we want to win 52 to 48," calling instead for "an old-school ass-whipping." NUHW estimates that SEIU outspent it by about 50 to 1.

NUHW activists cast the battle as a struggle over the soul of unionism, pitting centralized control against member-run locals.

Here a campaign volunteer recounts a day of door-knocking in Fresno.

We’d been told the night before to bring our own sunscreen and water: “It won’t be too hot, just high 80s or low 90s.” I’d driven down with a Bay Area friend to spend a day going door to door to get out the vote for National Union of Healthcare Workers in Fresno, the day after ballots were mailed.

Most UHW members must wait a year or more to vote SEIU vs. NUHW. Many, like ousted steward Lisa Tomasian, say SEIU staffers are colluding with management against NUHW supporters. Read more.

At the orientation, we were given workers’ names and some good maps, but no GPS, no bottled water, not even a clipboard or a pen. The barebones operation was perhaps a necessity more than a virtue. It was David v. Goliath in terms of resources, as Service Employees (SEIU) flew in staffers from all over the country and rented them cars and hotel rooms. We heard that they’d gotten new white T-shirts for 900 people, instead of the usual purple.

As NUHW organizer Ching Lee took the volunteers through the issues on a flipchart, she assumed our ability to understand and explain them. We were handed some talking points, but the brief session didn’t feel like cannon fodder being given orders but like a collaboration among equals.

When Ching talked about SEIU flying in outsiders, we noted that we were outsiders, too. “If that comes up, just tell your own story, why you’re here,” she said. I appreciated the trust, and was glad for my recent housecalling experience in a union drive.

Since this was the get-out-the-vote portion of the campaign, all the workers we visited had previously indicated support for NUHW. Usually they’d signed an authorization card, signed a letter, and then been visited again. Ours was at least the fourth visit by NUHW. Some had been called on by SEIU, too. It became clear that Sophia Mendoza, the organizer for that area, had taken the time to get to know folks and explain the issues. Everyone smiled when we said, “We’re working with Sophia.”

NUHW’s talking point was that the union had always been able to stop the county from making pay cuts. But now SEIU had been in control for just a few months—and the county had reduced pay from $10.25 an hour to $9.50. NUHW said it would try to reverse that cut.

SEIU plans to split homecare workers off into their own statewide local. That local, based in Los Angeles, was used as a cash cow by its president, recently removed for corruption, and its LA members are lower-paid than those in NUHW.

Workers mostly assured us they would vote for NUHW, though some were still confused about who was who, with both unions claiming to be the original. One woman who’d already mailed her ballot for NUHW told us, “I didn’t know anything about the union till all this. Why didn’t they do something to stop the cuts? Maybe getting someone new in there will help.” She was angry about her dues money being spent on “cushy jobs” for the SEIUers coming in to campaign.

We thought it unfortunate that the first big test for NUHW came with homecare workers, who because of their lack of a common workplace were sure to be less active and aware than, say, hospital workers. You could see why, to many workers, it looked like just a contest between the purple team and the red team—and why did each color care so much about them so suddenly? “I’m maxed out with people telling me how to fill out my ballot,” one worker said, before we could open our mouths.

At 9 p.m. all the volunteers, about 100 people, gathered outside NUHW’s office—mostly empty floor space—to trade notes. I saw a fired SEIU staffer I knew from LA, two Kaiser workers who’d been to the 2008 Labor Notes conference, even a former Labor Notes intern.

The mood was buoyant (without alcohol) but not over the top—NUHW is not making overconfident predictions of victory, given the mismatch of resources. Instead the feeling was that cause feeling, that solidarity feeling, when you’re working with like-minded folks for something you believe in.

People compared notes on their numbers. Interim president Sal Rosselli spoke, avoiding the “stake through the heart” rhetoric that SEIU trustee Dave Regan had used at a staff rally the night before.

The meeting was short, so folks could be out at 7 a.m. the next day.

Related
Massachusetts Nurse Strikers Aren’t Blinking »
Viewpoint: Solidarity for the Tenet Nurses Strike Should Be Labor's Top Priority Right Now »
Steward's Corner: How One Union Uses Kitchen Table Economics to Advance Medicare for All »
Engines Out and Pickets Up to Stop Health Plan Downgrade by Cummins »
Global Cleaning Workers Share Their Struggles as the First Line of Pandemic Defense »

The election in Fresno (which is under challenge) was a victory for NUHW. Why? I believe Winston Churchill once said. "Never have so few, done for so many,so much". That may not have been the exact quote but it describes how the few NUHW volunteers, with limited resources, were able to withstand the SEIU political war machine and reach out to thousands of union members with the truth. Seiu trustee Dave Regan did not get the "We will bury you" results he wanted.I guess he was surprised that union members in California are intelligent and have a voice. That's what happens Dave when you have a WarLoard/Union Boss mentality such as yours. That goes for the rest of your friends as well.

NUHW is going to win because we are about the future of our union members.The former UHW leadership which is now NUHW always found a way to save jobs and wages from budget cuts. We are doing it now. What has Seiu done for you lately?

It has been reported that SEIU spent $10 million of union members dues in their effort to remain in control in Fresno. Why so much money vs a few thousand that NUHW spent through donations? Well, if you can't win an election then you buy or steal one. It's all about Control with Seiu.

The union members in Fresno were told by Seiu that they needed vote to stay with SEIU-UHW to remain strong along side Kaiser.The former leadership of UHW said the same thing and were placed in trusteeship by Seiu. However,Seiu will be moving these Seiu-UHW members into another union in a few months. Kind of makes you wonder why anyone voted to stay with Seiu-UHW.

Once in awhile there is a struggle which is RIGHT! History reminds us of such struggles: 1) civil rights act 2)womens right to vote 3) voters rights act. These are a few Democratic rights which at one time were denied to countless of people. NUHW is such a struggle. NUHW stands for the right of union members to have democracy in their union. Their right to determine their own leaders and future. To ultimately have Free Choice.

Seiu can only offer the corporation approach where the Executive board controls everything. You just supply the money. Reform is not in their vocabulary.

Please give a few minutes of your time when a NUHW volunteer calls. We use our own phones and minutes and volunteer our time because you need to know the truth. Get involved,stay informed and support NUHW.

When I was a student activist at the University of Wisconsin there was a activist named Gregg Marin. I have heard that he is now a member of SEIU What up Gregg? Remember your roots.

NUHW has done an amazing job with no resources but great people and a lot of heart. SEIU has done a pathetic job with tens of millions wasted, not to mention the ongoing loss of experienced organizers who are quitting in disgust at what SEIU has become. SEIU may have bought a narrow victory in Fresno but if they don't change course they will burn through their millions in a flash and still lose in the coming months - in their battles with NUHW coming soon in San Francisco and Sacramento, and their war of choice with UNITE HERE across the country.