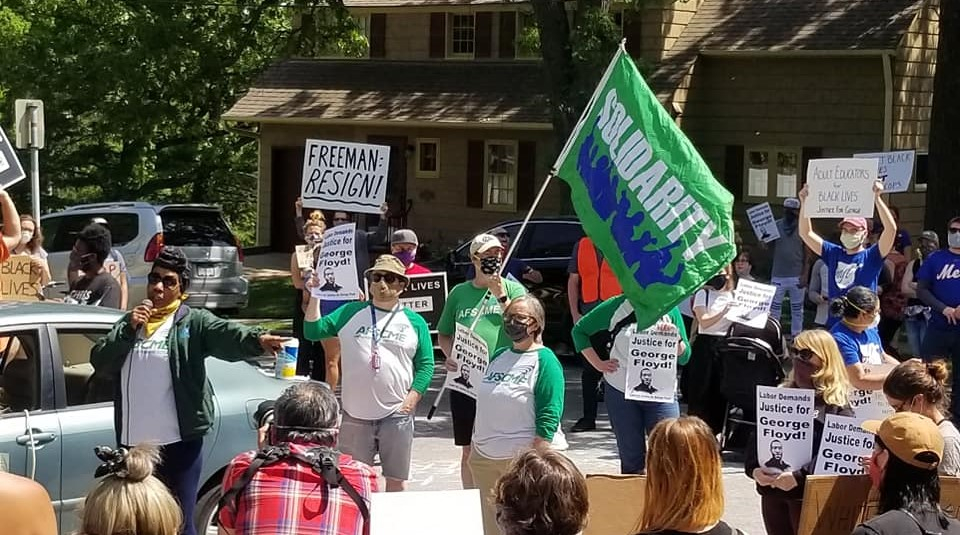 I watched with horror the video of George Floyd’s murder by Minneapolis Police, so bravely captured by a 17-year-old African American woman. Seared in my brain is Officer Derek Chauvin’s smirk as he knelt on Mr. Floyd’s neck, ignoring his pleas for help, his calls for his mother, and his repeatedly saying, “I can’t breathe.” Three other officers stood by, protecting Chauvin from any intervention that might save Mr. Floyd’s life. As I watched and wept, I looked more closely at the background and realized that Mr. Floyd was killed just blocks from my house.

Minnesota, and the Twin Cities in particular, have a long history of unchecked police brutality. More than 40 people have been killed by the police in the last five years, the majority African Americans and other people of color. Only one police officer has been found guilty of murder, and that was a Somali-American officer who killed a white woman in 2018.

While many rank-and-file union members and some union locals, including mine, have actively joined the call for racial justice and police accountability, the labor movement officialdom in Minnesota has largely been silent before now. Unions that have spoken out have gotten a great deal of pushback by conservative white union members and by the police unions in Minneapolis and St. Paul.

My local, AFSCME 3800, clerical workers at the University of Minnesota, has long mobilized our members to join with Black and Brown community organizations in calling for an end to police repression. When Mike Brown was killed in Ferguson, our local brought a resolution calling for justice to our state council convention, but it was voted down in an effort led by corrections locals.

When Jamar Clark, an unarmed Black man, was killed by police in 2015, our local again passed a resolution calling for justice, encouraged our members to participate in protests, and helped organize a rally of hundreds of labor activists who called for police accountability. We were criticized on Facebook and sent threatening FB messages by police officers and their supporters. The St. Paul Police Federation passed a resolution denouncing our local and calling me out individually.

When Philando Castile, a school cook and member of Teamsters Local 320, was killed by the nearby St. Anthony Police, many more unions spoke out, led by the teachers unions in St. Paul and Minneapolis; the latter organized a march and civil disobedience during the AFT national convention. They were denounced by the Minneapolis police union and called out by some conservative white union members.

IT'S A NEW LANDSCAPE

The unprecedented uprising of grief and rage over the murder of George Floyd has changed the landscape. Rank-and-file activists are pushing their unions to take action and more unions are encouraging their members to participate in actions as visible union members.

The calls for justice coming from the higher levels of the labor movement today are a direct result of the last week of unrest, but also the result of years of organizing by Black and Brown community organizations demanding racial justice and an end to police brutality. It is also the result of local unions and rank-and-file members who have taken to heart the adage, “An Injury to One Is an Injury to All.”

THE VOICE OF THE UNHEARD

As Dr. King said, a riot is the voice of the unheard.

Peaceful protests the day after Mr. Floyd’s murder were met with rubber bullets and tear gas by the police, provoking more and more militant responses. Dozens of buildings have burned, and hundreds of businesses have been vandalized and looted.

There have been a lot of reports that this is the work of “outside agitators” or provocateurs, but we say no. There is a long history of saying civil rights protests and labor strikes were organized by “outside agitators,” and these claims are always proven false.

After nights of buildings being burned throughout the city, I’ve heard many ask, “why would people burn down their community businesses? It must be outsiders.” Following the burning of the police precinct, the first buildings to go, and the ones that have been most targeted, are businesses that most exploited people: pawn shops, liquor stores, cell phone stores, dollar stores, gas stations. Target’s world headquarters is in Minneapolis, and the store that was looted had been used to test all of the company's security measures—many people have reported being profiled when shopping there.

There is a high level of poverty in the Twin Cities, and many lost what jobs they had because of the pandemic or they are risking their lives as essential workers. COVID-19 is far more deadly for African Americans than for whites. The rebellion started because of George Floyd but it is also over the systemic racism that is oh so real. The rage is real. As AFSCME 3800 executive board member Mahva Jones said at the labor rally, “The system is not broken, it is working as designed. At no point in this country's origin were Black people meant to be anything other than slaves or dead.”

I’ve lived in South Minneapolis for 12 years and have loved living in a multiracial working class neighborhood that has deep community ties. But for my Black and Brown co-workers and neighbors, what many white people have lauded as idyllic is a façade.

The past week has felt like we are living under military occupation: curfews, freeways closed, public transportation shut down, thousands of National Guard on the streets, in addition to hundreds of police. Blackhawks and police and military drones can be heard over head 24-7 since last Wednesday. If we are able to sleep, we are frequently woken up by the sound of flash-bang grenades and tear gas being fired. The smell of fire and smoke is pervasive when we are outside.

Many are fearful of being teargassed or shot while protesting, or even while being at home on our front porches, as that has happened in some neighborhoods. The fear of the police presence is pervasive, and it is making many white folks realize that this is a fear that our Black and Brown neighbors and co-workers feel throughout their lifetimes, not just during a week of unrest.

The last week in the Twin Cities has been unlike anything I have seen in my lifetime. Though the repression and militarization has been terrifying, the power of the people demanding justice has been palpable. The crowds that have at times numbered in the tens of thousands are multiracial, multigenerational, and mostly poor and working class.

Last night, a number of AFSCME 3800 members spent several hours together at the George Floyd memorial, reading the tributes from around the globe, listening to person after person tell their stories of repression at the hands of the police, and joining the calls for justice and systemic change. The area of 38th and Chicago where George Floyd was murdered is being called sacred space, and it felt that way. In this space and in spaces like this around the country, real communities are being built.

Cherrene Horazuk is president of AFSCME Local 3800, clerical workers at the University of Minnesota.

Related
Communications Workers Fight Telecom Giant for MLK Day Off »
Review: This Little-Known Black Wobbly Dockworker Led the Most Powerful, Democratic Union of His Day »
Interview: If Only Unions Had Managed to Organize the South, Could Trump Have Been Avoided? »
The Movement for Black Lives and Labor’s Revival »
Lessons from the NBA Strike for Black Lives »

Workers' unions and police unions are entirely different formations that stand on opposite sides of the class war.

Workers organize unions in order to protect themselves from the boss.

Police organize unions in order to protect themselves from accountability for their crimes against the working class.

The labor movement cannot unite workers against racism and also provide a harbor for their class enemies.

This is a beautiful story ! Solidarity ! The cop unions do not represent workers , but anti-worker agents of repression. They should be kicked out of the labor movement.

We shoot ourselves in the foot when we include police in the labor movement. Police are not working class and not on our side. They are part of the managerial class.

The capitalist class are too small to enforce their rule in person. They need a larger managerial class to act on their behalf.

Being in a union does not change the managerial role of police, as evidenced by their use as strike-breakers and their license to kill, both of which are supported by State authorities.

Police unions should be barred from the labor movement. Including them has a paralyzing effect. No union federation that includes police can support striking workers and also support police escorting scabs through picket lines. Having police members also blocks union federations from publicly supporting demonstrations against police killings.

Police are middle-class professionals who are paid to uphold capitalist rule by terrorizing the exploited and oppressed.

They are not part of the labor movement. Their loyalty is to the other side.
Susan Rosenthal
https://susanrosenthal.com/