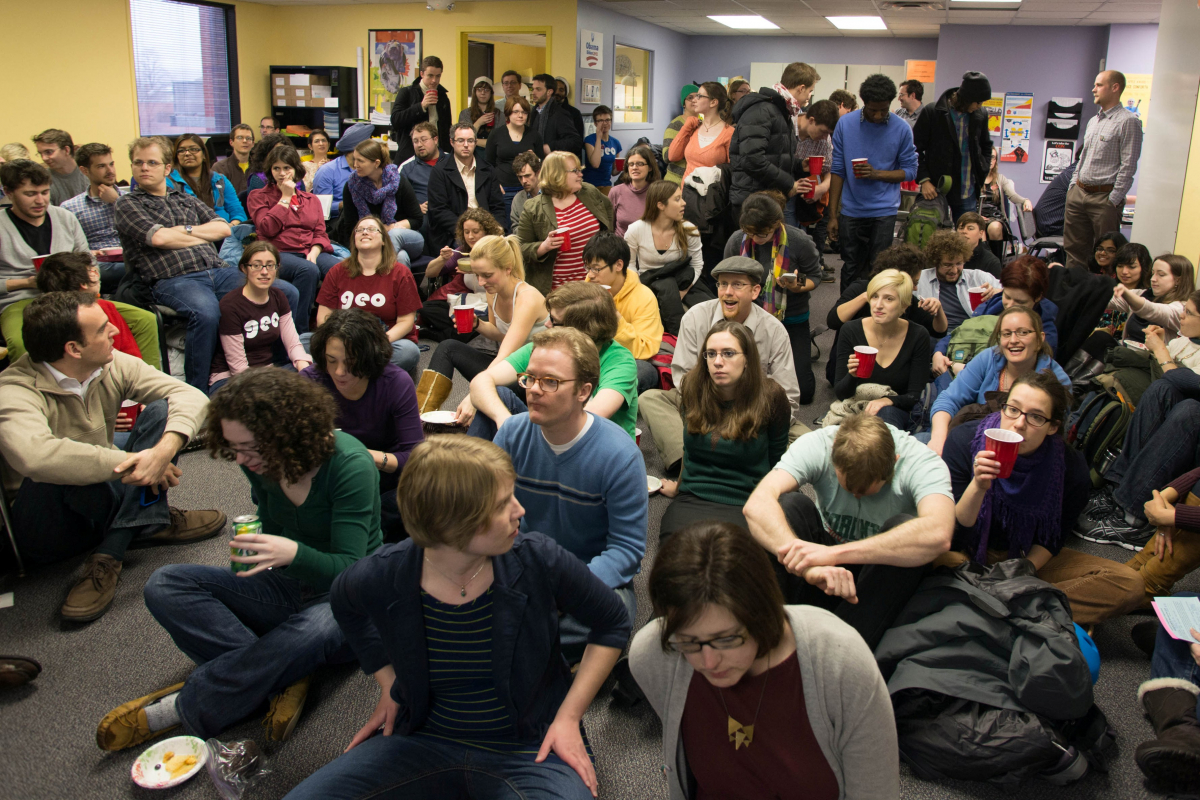 Graduate employees at the University of Michigan refused to be cowed by the new law. At membership meetings they agreed on their bottom line—and walked away from a bad deal. Photo: Isaac Epstein, GEO.

By quickly settling contracts before Michigan’s new right-to-work law took effect March 28, many teachers’ locals have locked in dues deduction or fair share. In most cases, though, those contracts reflect the advantage Republican lawmakers handed to employers when they rammed through right-to-work last December.

In Taylor, a blue-collar suburb of Detroit, the Teachers (AFT) local locked in 10 years of union security—teachers must pay dues or an agency fee—and a five-year contract with a 10 percent pay cut.

“When we went into negotiations we knew it would be concessionary,” said President Linda Moore, citing the district’s $20 million deficit. Her local had shut down schools for a day to protest right-to-work at the state Capitol in December.

She said the district was not reluctant to grant union security because “we did $17 million in concessions!” In the contract’s fourth year, pay will return to pre-concession levels.

The state AFT worked hard to get local contracts signed before the deadline. A conservative think tank monitoring unions’ efforts to “dodge” right-to-work reported that at least 54 school districts signed contracts, including both AFT and National Education Association locals, covering close to 20 percent of Michigan teachers.

In Detroit, Wayne State University’s full-time faculty union, the 1,950-member AAUP-AFT, got eight years of union security in exchange for what chief negotiator Anca Vlasopolos called “a decent contract—in these days,” but with a “mentoring” provision that will be “horrifically onerous” for some faculty.

Raises will be 1.25 percent each year, plus merit pay that “most people won’t get,” Vlasopolos said.

Decrying the “corporatization” hitting universities everywhere, Vlasopolos said, “We had to make concessions to obtain the length of the contract. We were not able to hold on as strongly to things that were very dear to our hearts and important for the university to remain a university.”

In particular, under the pressure of settling before the deadline, the question of online teaching—where professors now have no say and may have as many as 200 students in a class—was put off to a joint committee, which will report to the board of governors.

“The aim of the corporate university is to become a diploma mill and rely on a large percentage of part-time teachers,” Vlasopolos said. “When it’s a matter of huge amounts of money, it’s extremely difficult to convince people to make sure we don’t become a University of Phoenix.”

The health plan was also relegated to a joint committee. Africana Studies Prof David Goldberg fears the result, combined with inflation and the tiny wage hikes, may be “a net loss.”

Wayne State President Allan Gilmour, a former top officer at Ford Motor Co., made headlines last summer when he proposed that Wayne become the first major U.S. university to end tenure. The union quickly got 6,000 signatures on an online petition, and Gilmour backed down.

The new contract contains a provision that local President Charlie Parrish insists is “not to be viewed as a first step in a detenuring process.”

Vlasopolos believes the system will not lead to “detenuring on the scale the administration would like,” but it will be “a method of breathing down people’s necks.”

“The notion of being a professor is that it gives you time and space to invent things, to be creative, to have time to think through certain problems,” she said. “I think the best people will look to go somewhere else that doesn’t have these constraints.”

Detroit school teachers may wish they could look elsewhere, too. They signed a pay freeze through 2016—after already taking huge cuts in 2010 and 2011.

Teachers dropped a lawsuit over evaluations, said local President Keith Johnson, in exchange for union security and other gains, such as reinstating binding arbitration. (After the district’s state-appointed “emergency manager”/dictator gutted teachers’ previous contract, arbitration was binding only if the arbitrator sided with the district.)

Non-teacher members such as social workers will now be protected by just-cause provisions for discipline, but teachers are still subject to the legislature’s Teacher Tenure Act. That 2011 bill took away just-cause and decreed that teacher layoffs would be determined by “effectiveness,” not seniority.

Despite the weak contracts reached under the pressure of right-to-work, Republican lawmakers were furious that teachers’ unions managed to hold onto members and dues deduction.

One House committee proposed a law that any university signing a contract between December 10 and March 28 would lose 15 percent of its state funding, unless the contract could demonstrate an immediate 10 percent cut in labor costs.

Despite the threat, boards at both Wayne and the University of Michigan (which have big Democratic majorities) voted to stand by the contracts—an indication of just how little state funding means to these public universities anymore.

“Ten years ago Wayne got 65 percent of its general fund budget from the state,” Parrish said. “Now it’s 28 percent, and less at U of M. So the state has less influence on decisions. But it has resulted in a huge tax on the middle class trying to send their kids to school.”

WILLING TO WALK AWAY

One AFT local managed to sign an early contract with union security but fend off most concessions. “GEO was able to buck pressure to settle at any cost because it’s member-run,” said Jim McAsey, staffer for the 1,800-member Graduate Employees’ Organization at U of M.

McAsey said the union was willing to risk losing dues deduction now and rely on “the sort of organizing model that has brought us success historically” when its contract expired next year.

GEO, the country’s second-oldest grad employee union, has struck for almost every contract in its long history, winning a contract with good pay, no health insurance premiums, strong sick leave, parental leave, disability language, and even the right to address new grad employees at department orientations.

In exchange for settling before right-to-work went into effect, the U of M administration wanted to weaken job security and alter a work-hours requirement so as to give hundreds of members a 20 percent pay cut.

At frequent membership meetings, bargainers repeatedly asked, “What is our bottom line?” When management insisted on crossing the line on those two issues, members voted to walk away from the table.

“We sent a clear message that we would be organized to strike in 2014—even under right-to-work conditions,” McAsey said.

The next day, management called wanting a four-year deal. The bottom-line issues came off the table, though members did accept a less advantageous expiration date, 2 percent raises instead of their usual 2.5-3.5 percent, and the possibility of a co-pay increase.

WAS IT WORTH IT?

Anca Vlasopolos, vice president of the Wayne State union, worked there for 25 years when the university was an open shop. She thinks “we would have been absolutely screwed” if the union hadn’t kept union security, because of the free-rider problem.

The contract passed by 93 percent, with about a quarter voting. Bryan McCann, in the Communications Department, says there’s a “widespread sense of relief to be done with the process, but there’s a minority who are dissatisfied with the final product and see it as largely obsessed with the race to beat out right-to-work.”

Africana Studies Prof Goldberg says that although right-to-work scared union leaders—“rightfully so”—he thinks the union “missed a great opportunity to reorient the way they do business,” with mobilization rather than reliance on behind-the-scenes connections.

At least, he added with sympathy, “we’re not screwed as badly as public school teachers.”

A version of this article appeared in Labor Notes #410, May 2013. Don't miss an issue, subscribe today.
Jane Slaughter is a former editor of Labor Notes and co-author of Secrets of a Successful Organizer.
Related
Learning from the Covid Disruption: How Unions Can Emerge from the Pandemic More Effective »
‘You Have to Be Very Persistent’: Lessons from the Starbucks Union in Chile »
Workplace Bullying in Higher Education is Rampant. We’re Fighting Back »
Farm and Construction Equipment Workers Strike in Iowa and Wisconsin »
Amazon Bites Back in Vote at Second New York Warehouse »

The article didn't ask for applause for signing long-term contracts to lock in dues deduction. Rather, my own conclusions are closer to Nancy EJ's on that topic. My guess, though, is that the "peer mentoring" will look nothing like that friendly-sounding term. And the size of the concessions is, unfortunately, far from unprecedented. Thanks for writing.

Let me be certain I have this right. Unions locked in unprecedented longterm concessions solely to prevent some members of the bargaining unit from withholding dues -- one can assume because the union does not enjoy their support -- and somehow the rest of the labor movement is supposed to applaud that? Have you all become that unaware of your own zealotry that the hypocritical premise of this article doesn't sicken you? Does concessionary bargaining of longterm contracts to preserve forced dues deduction seem particularly noble or wise or true to the tenets of grassroots unionism? Would Mother Jones be proud of this?
Why the hell are teachers unions running so scared? Why do they presume a crippling percentage of their members can't see the value of their union enough to support it willingly? Don't teacher contracts ensure a big enough paycheck to easily cover the cost of what are surely quite affordable union dues? Or is internal organizing so woefully poor that the union can't even predict what its members will do? Or does the union presume a significant percentage of teachers lack the ethical fiber to pay their "fair share"? And if that's the case, why are such low lives protected in teaching our children?
Why the fear of a membership free to willingly pay their dues, locked in on an annual basis? Is the pay too low? Are the dues too high? Are the benefits of unionism that obscure? Is the union running on that thin a financial margin? Maybe the next article on the subject should include a full scale review of AFT and MEA finances coupled with a study on the impact of dues on the typical union household. Here's a thought -- maybe the dues need to be lowered or the return on them higher, but hey, let's not indulge in crazy talk, right?
Is the fear that noble irreplaceable working class warriors like David Hecker and the other knuckleheads at the AFT would just walk away from the members they devotedly serve if asked to take a pay cut or do without a few perks while building the union back up to full participation? And don't these contractual "solutions" just kick the can down the road, to I presume just past Dave Hecker's retirement party?
And is it really true that no tenured professor at Wayne State could use even a little peer mentoring? What planet are you people from again? Have you ever talked to a single student at Wayne State? If not, I could provide a list of lectures you might want to sit in on.