‘Better Work’ for Garment Workers: Which Side Are You On? 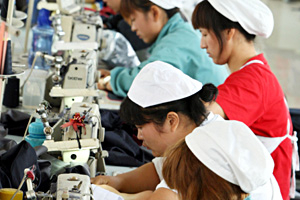 With the best of intentions, the International Labor Organization has launched “Better Work” programs in several countries in hopes of easing harsh conditions for long-suffering garment workers.

With the best of intentions, the International Labor Organization has launched “Better Work” programs in several countries in hopes of easing harsh conditions for long-suffering garment workers.

In terms familiar to any veteran of joint labor-management schemes, the ILO—the special United Nations agency set up in 1919 to address workers’ issues—predicts relief can be achieved by squeezing out conflict and putting everyone on the same team.

Better Work projects are newly underway in Jordan, Vietnam, and Haiti; these are patterned on the decade-old “Better Factories Cambodia” model, but with an ominous new twist—funding from the World Bank, Jones Apparel, Sears, Wal-Mart, Levi Strauss, and many rich-country governments (for most of you reading this, that means: your tax dollars).

Who can imagine that workers who face incredibly long odds in the struggle for self-organization will benefit from this scheme? The answer from Cambodia is “they won’t.”

In mid-September, a Cambodian labor rights advocate, Moeun Tola, testified before a U.S. House human rights panel. His message was that working conditions in his country had “sharply deteriorated.”

The Global Union Federation for apparel and textile workers noted in a recent study that Cambodian workers spent nearly 25,000 working days on strike over low pay in the first six months of 2006.

The 48 Cambodian garment workers I spoke with during a research trip this summer repeated the same age-old complaints about sweatshops: below-subsistence pay, forced overtime, and abusive bosses.

Better Factories Cambodia (BFC) was brought into being by former President Bill Clinton; it increased that country’s quota for apparel exports to the U.S. In exchange, the industry would have to submit to regular inspections by the ILO’s “social audit” teams.

While Clinton was across-the-board awful on global labor rights issues, here was a hopeful moment—finally, a positive opening for the ILO and its $900 million annual budget.

The ILO has long been used by corrupt despots like Indonesia’s Suharto, delivering the dictators an aura of respectability through conference collaborations and hollow “joint statements” on the importance of protecting workers.

An incredible gulf exists between feel-good rhetoric and reality. In 1989, I asked the U.S. embassy for labor law enforcement statistics in Indonesia. Inspectors found more than 13,000 violations, and only 14 cases had made it to the first investigatory step.

But even little information is better than what the ILO is providing, which is nothing. Numbers like these simply don’t exist for any country on the ILO website.

Clinton’s goal was to give Cambodia a slice of the outsourcing-apparel pie. It certainly was successful at that. The country’s apparel exports to the U.S. rose from $3.7 million in 1996 to $2.18 billion in 2006.
One estimate claims that the 330,000 apparel jobs there affect nearly a quarter of Cambodia’s population of 9 million.

While it may be pleasing to report that a U.S. policy worked to help a traumatized and war-weary country, it’s naive not to look below the surface of the garment-production system we helped to create—and see what expanding it means for workers everywhere.

As Cambodian Prime Minister Hun Sen consolidated power earlier this decade, violence against strikers became more common. The most aggressive and effective union leaders were gunned down in the street. One of them, Chea Vichea, gave an interview not long before his death in 2004, saying: “The idea from the ILO is that it doesn’t like the workers to strike. It likes them to negotiate. But in Cambodia, if [employers] don’t see the workers are strong they don’t negotiate. It is the same everywhere.”

Chea’s union claimed 40,000 members in the garment sector, yet the Better Factories Cambodia program reduced his role to that of a small cog in an industrial relations machine.

It is “the same everywhere” because global brands source from production companies out of Korea, Taiwan, or China. These companies then set up shop in one-party states or where there is no significant labor-friendly party. Hun Sen’s government, though, was beginning to feel pressure from a politically potent labor-oriented party.

Chea’s brother says the government had him killed. Someone walked up to Chea, reading a newspaper at a kiosk, and shot him in the head and chest.

What will “Better Work” look like in countries like Vietnam? The government welcomed it, without question, as the program set up shop during the most serious strike wave ever—more than 1,000 wildcats, occurring almost exclusively at export-oriented, foreign-invested factories.

Something about factory work leads workers to say “we’re not going to take it anymore” and to call for managers to sit down with workers’ representatives, in dignity. Autocratic governments certainly don’t want to see a model like this develop, lest it bleed into other spheres.

A key problem, however, exists. Many developing-world workers see almost no examples of unions delivering benefits or higher wages. Official unions aligned with ruling parties, some under the thumb of ex-military officers, reinforce their cynicism.

“The same everywhere” also means that the garment industry pays whatever tiny minimum wage is legally required, and that collective bargaining is just not happening anywhere outside the handful of garment shops left in rich countries.

And while managers at supplier factories and local government officials may claim to buyers from Nike and Gap that the workers’ rights to free association are (somewhat) respected, they have done everything within their considerable control to thwart actual bargaining.

Most powerfully, they shut down factories after workers win gains, as they did recently in Thailand and the Dominican Republic.

So for the ILO to endorse “jointness” in this environment is worse than merely papering over the misdeeds of thousands of supplier factories producing for the big brands. It works to deprive the developing world’s citizens of a key weapon in the arsenal of resistance, the independent and aggressive union.

Jeff Ballinger is completing a Laborers-funded doctorate fellowship at McMaster University near Toronto.

Hi Jeff,
Do you have additional information on the factory that was closed in Thailand ?
Thx
Pierre