Can Labor Out-Organize the Tea Party? 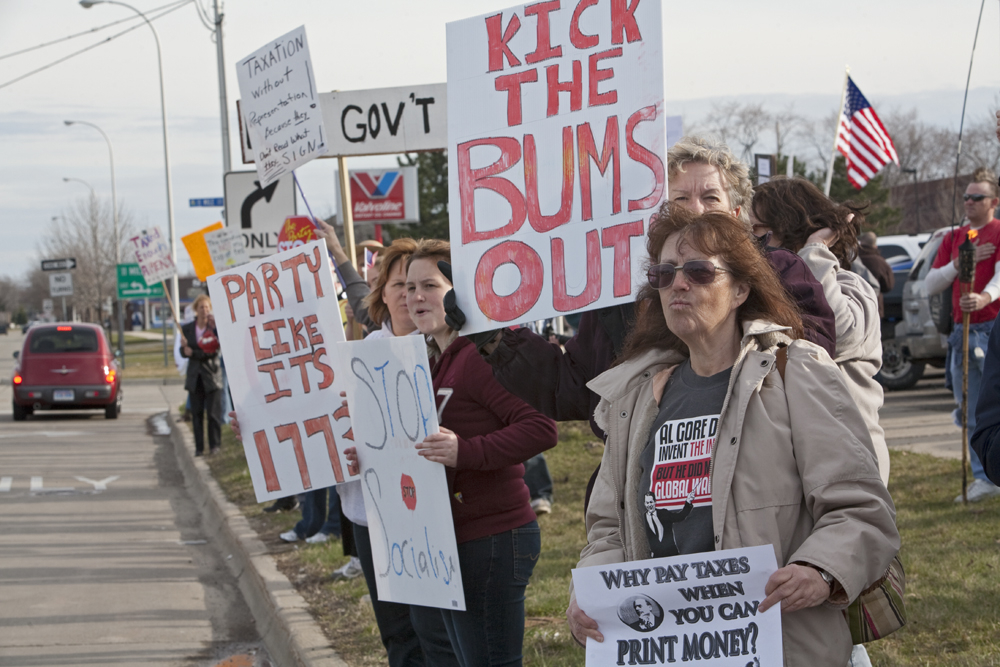 As tens of thousands of activists rally in Washington October 2, not all union members will be on the same page. No one knows how many unionists attended Glenn Beck’s “Restore Honor” gathering last month—they were surely a small minority—but the national political climate has opened some to the message of over-taxation, government-bashing, and fear of foreigners.

After all, even before the Tea Party came on the scene, 30-40 percent of union members were consistently voting Republican, according to many polls. And a CBS poll this month says 19 percent of Americans call themselves Tea Party supporters, though they may never have gone to a rally or visited a Tea Party website.

Even if most unionists see the Tea Party as the enemy, some express grudging admiration for aspects of it. Joe Cardona, a vice president of a Detroit UAW local, went with other auto workers to a Tea Party in the suburbs and though they weren’t welcome, tried to talk to people there.

“I don’t like that they run with that hate-mongering type of agenda,” he said, “but I respect that Tea Party people are fed up. That’s what’s hurt labor, we’ve been complacent for so long: ‘you can fix things by voting for the right candidate.’ I’m with them on holding these politicians accountable.”

A CHANCE FOR A SAY?

Although big money fuels the Tea Party, from billionaire libertarians to FOX News, it’s not simply a front for big business. Its lack of structure allows political greenhorns to take the ball and run with it, creating groups that are locally owned, act independently, and aren’t afraid to challenge the status quo—even if their ideas about what’s off-track and how to solve it are wrong.

With the economy a mess and neither Democrats nor Republicans producing a solution, the field is open for folks who say the whole system is broken. The Tea Party taps into many people’s very real sense of both insecurity and urgency. The movement dares to say that our problems are enormous, not fixable with Band-aids. An “analysis” that claims to explain the whole ball of wax (like Glenn Beck’s blackboards) is attractive, especially when the only other solution people hear is “vote for me.”

“When you don’t have a solution you start to make up stuff to try to explain it, and you fall prey to these guys who pretend to know what they’re talking about,” says Frank Halstead, a Teamsters for a Democratic Union warehouse worker in Los Angeles.

Bill Fletcher of the Center for Labor Renewal, who authored an economics education package for the AFL-CIO in the 1990s, says that because the union movement has not confronted racism seriously nor talked about how capitalism works, that failure leaves some members receptive to other explanations of their problems.

Thus the Tea Party mines economic insecurity and fading hopes for a better future—promising a return to a mythical past of American pride, honor, and prosperity.

NO PLACE FOR US

Besides, ordinary people know—either intellectually or in their gut—that they don't really count in the political system. It was a bilateral consensus, after all, that bailed out the bankers—and may soon cut Social Security benefits, too. The Tea Party feels like something they can get involved in and have a say.

And underlying all the insecurity is America’s age-old plague, racism, always available to help “explain” the world by blaming Blacks or immigrants or Muslims.

Michael Scarver, the Steelworkers’ PAC coordinator, is clear that when Tea Partyers say “we want our America back,” they are reacting to a Black man in the White House. A CBS poll showed 52 percent of Tea Party supporters believe too much has been made of the problems facing Black people—compared to 28 percent of the overall population. The poll also said 89 percent of Tea Party adherents are white.

In 2008 union leaders were forced out of their comfort zone and into talking frankly about race with their members. They argued that Obama’s race was a terrible reason not to vote for him, as Rich Trumka put it. But after the victory, the impulse to change the subject as quickly as possible made this openness short-lived.

Within a year, Obama’s promises to union members lay in tatters: no labor law reform, no public option in the health care bill, no real green jobs program. With unemployment at 10 percent, and a constant drumbeat of fear and hate in the media, the door was open to alternative explanations for who’s to blame.

How are unions addressing the Tea Party’s appeal?

Mostly by putting out their own message, “having conversations about the facts,” as the USW’s Scarver puts it. Though he’s taken members on around every topic from taxes to guns, many union leaders are nervous about conservatism among the rank and file and don’t call out their ideas directly. They tend to think unity is built by focusing on unions’ core mission of wages and working conditions, avoiding areas of disagreement.

AFL-CIO leaders are now beginning to challenge the Tea Party by name. In a late August speech in Alaska, AFL-CIO President Rich Trumka asked, “What is this crazy magnet that's pulling people to the right?” and criticized Sarah Palin for “getting close to calling for violence.”

Answering members’ questions in a web chat, federation Secretary-Treasurer Arlene Holt Baker said the Tea Party “promotes hate over hope” and tries to “divide us in a way that makes us forget about our economic interests.”

“If it’s a choice between fearing Muslims and Mexicans or the corporate guys, we’ve got to be more blunt about it,” Crosby said.

A version of this article appeared in Labor Notes #379, October 2010. Don't miss an issue, subscribe today.
Related
Duke University Press Workers Organize with NewsGuild »
The National Guard Came to St. Paul to Repress Protests. We Kicked Them Out of Labor’s Hall. »
Communications Workers Fight Telecom Giant for MLK Day Off »
Review: This Little-Known Black Wobbly Dockworker Led the Most Powerful, Democratic Union of His Day »
Interview: If Only Unions Had Managed to Organize the South, Could Trump Have Been Avoided? »

‎"AFL-CIO President Rich Trumka asked, “What is this crazy magnet that's pulling people to the right?”" In response to this liberal sycophant of the Democratic Party, the "crazy magnet" is misleaders like him who have had their their heads up the Democrats' asses for the past 60 years. So, when the corporate Democrats and Republicans moved right it looked to them like the whole universe move right under some magical, mystical force.

Please do not capitalize "tea party" when referring to that group. They are not a recognized (or organized) "party" in this country such as the Democrat Party, Republican Party, etc. I cringe whenever I see this racist hate group given such respect.