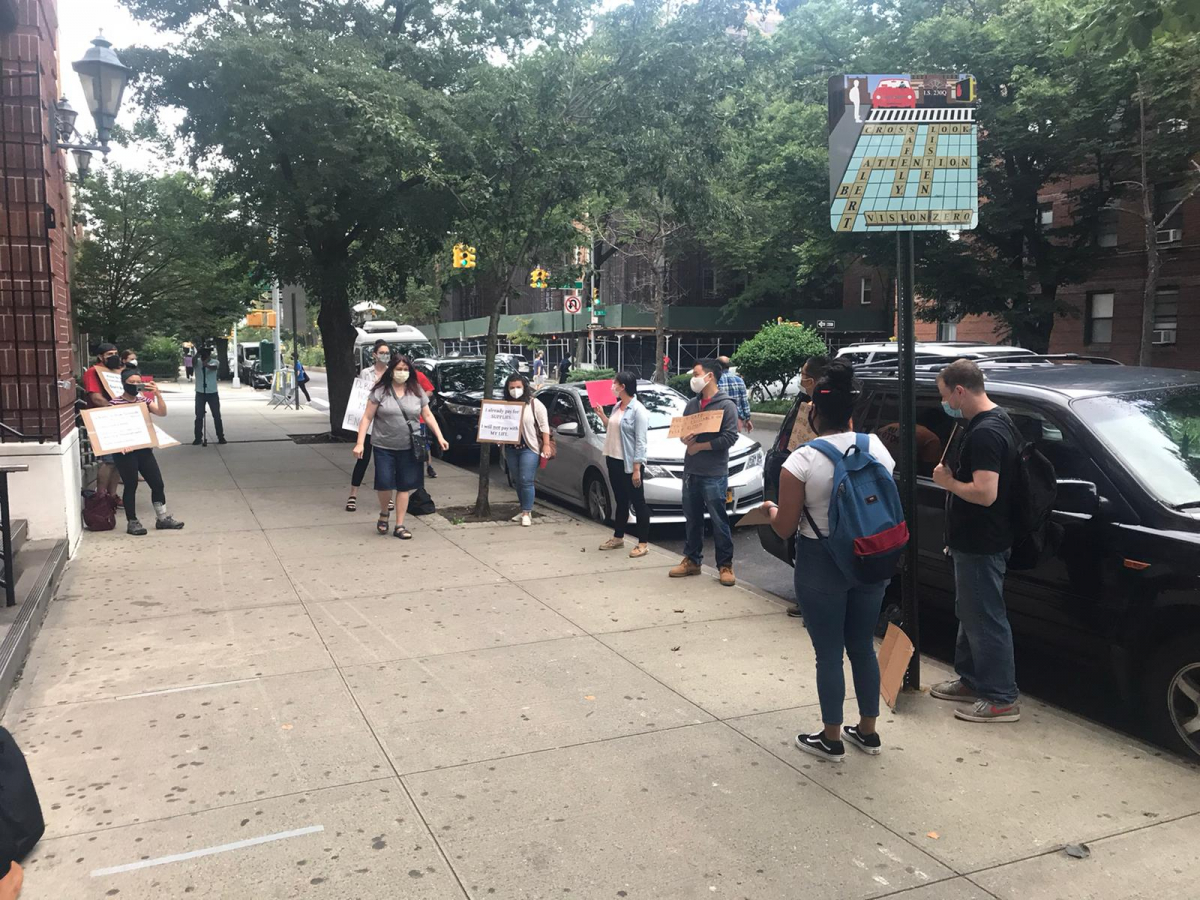 UFT members picketed outside IS 230 in Queens. Photo: MORE

UPDATE, September 18: Amid continued protests, yesterday Mayor Bill de Blasio announced the start of in-person school in New York City will be further delayed for most students. Pre-K and special ed schools will still open September 21, but elementary school reopening has been pushed back to September 29, and middle and high school to October 1. —Editors

Last Friday, when New York City educators were supposed to be in their third day of “professional development” held inside school buildings, teachers and other staffers at a Queens middle school, IS 230, took their work outside.

Sitting in chairs and on the concrete with their laptops, they refused to enter the school building after they learned that one of their co-workers had tested positive for COVID-19. Union officials were notified Thursday and immediately informed members. The city didn’t notify them till Friday.

A tweet about the action from the 200,000-member United Federation of Teachers might have led the uninitiated to think UFT organized the action. Don’t be fooled. While the union’s publicity is welcome, it was educators from the Movement of Rank-and-File Educators (MORE) who called a building meeting via Zoom on Thursday so that UFT members could talk, make a plan, and be at the school ready to picket Friday morning.

The MORE caucus has been leading the fight for safe schools in New York since March, when their organizing for a sickout pressured the mayor to close the schools.

Since that shutdown, MORE has been growing fast. First members established borough-wide committees. Based on member interest, these morphed into committees around issues—working conditions, health justice, organizing, etc.

As each borough committee generated demands and action plans that could be supported throughout the city, MORE members took those plans down to the district level (mostly geographical) to coordinate communication and actions.

From the district level, member-organizers reached out to bring educators together at their specific schools. Most of these member-organizers had come through one of two organizing trainings MORE held in July and are using the caucus’s reopening toolkit.

At the same time that MORE has been digging deep into worksite organizing, members have also been standing side by side with the community as the Black Lives Matter movement blossomed.

MORE had brought a resolution in support of the movement to the UFT years ago and finally—after being voted down twice—pressured UFT to relent and support the resolution just this past spring. MORE organized a rally of educators for Black lives in June, and members have brought parents and students into meetings to talk about their concerns about school reopening.

These actions were possible because MORE has become a place for members who have previously seen their work as in the community and not the union.

As we went to press, case numbers were rising among educators in New York (22 by September 11) and management had no plan to share this information with educators. Over the weekend MORE held two city-wide meetings, in order to accommodate everyone who was interested.

From these meetings, with hundreds of participants, came a plan for a day of action on September 14. More walkouts and sickouts looked likely in the days ahead.

New York City schools are scheduled to reopen for some in-person classes on September 21—one of the few big cities in the country attempting to start the school year with in-person instruction.

Barbara Madeloni is Education Coordinator at Labor Notes and a former president of the Massachusetts Teachers Association.barbara@labornotes.org
Related
Minneapolis Strikers Demand a Living Wage for the Lowest-Paid Educators »
A Nurse’s Story: My True Cost of the Pandemic »
Richmond Educators Are First In Virginia to Win Bargaining Rights »
Twin Cities Teachers and School Employees Gear Up for Strike »
Transit Workers Deserve Hazard Pay »