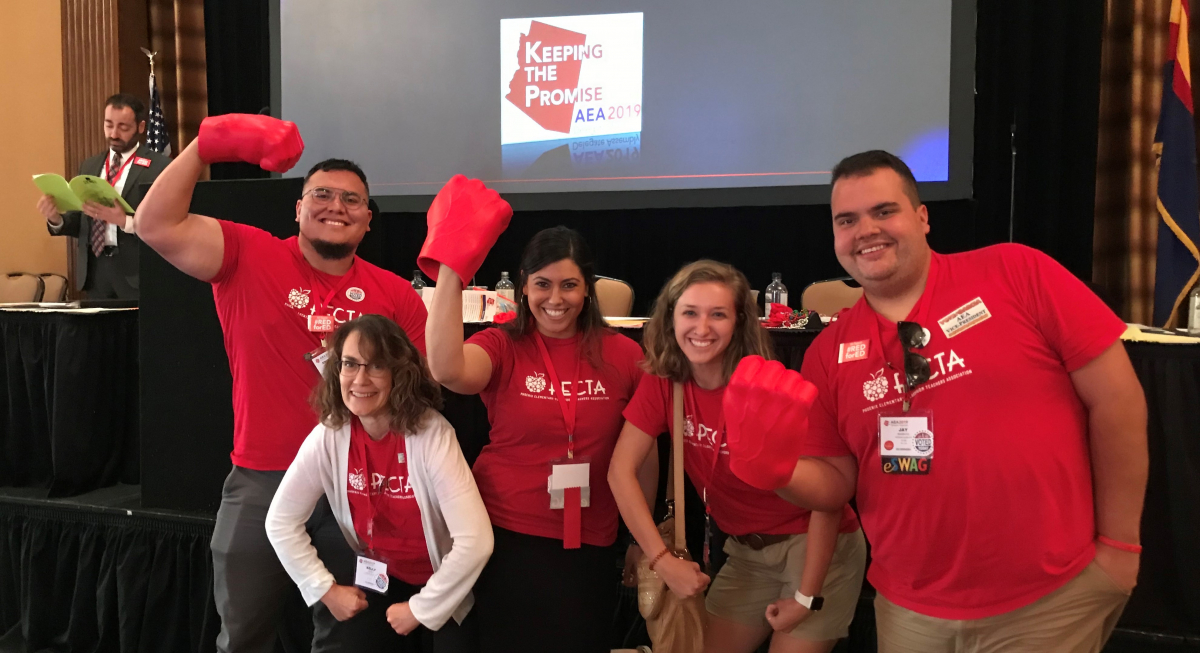 Two years ago, the Red for Ed movement swept across Arizona. Seventy thousand educators flooded the capitol demanding higher wages and lower class sizes and a stake at the bargaining table.

For many locals in Arizona, the six-day walkout reinvigorated work that had been underway for years. But in the Phoenix Elementary Classroom Teachers Association (PECTA), we used the walkout to totally restart our local.

PECTA started out as a small local, with low membership and virtually no leverage for bargaining. We represent teachers and other non-administrative, certified staff, including psychologists, nurses, coordinators, and social workers. After the walkout, many educators wanted to know how they could hold the district accountable.

Elections for union office were scheduled for May 2018, just after our massive mobilizations, so a team of us who had played a large role in the grassroots organizing during the walkout ran for executive board positions. Most ran unopposed, but I ran for president against the incumbent. I ran my campaign with the promise to catapult educator voices to the forefront of decision-making in our district. With the support of those in the Red for Ed movement and after a close election, I became the president, and a team of collaborative and committed educators joined me on the executive board.

STEP BY STEP TO HIGHER SALARIES

Our first step was to improve our membership numbers. We started by finding people who had been involved in the Red for Ed movement. Many of them had been school liaisons for Arizona Educators United, the grassroots movement that organized Red for Ed. They had organized the staff at their schools, but they had never been union people; they had not seen the benefit of our relatively weak local. We recruited many of these leaders to be site reps at their schools.

Next, we spent time with our site reps to identify potential new members to recruit and found ways to get them involved. For those who weren’t sure about signing up, we found ways for them to see firsthand how PECTA could make an impact on their career. Charting and planning our membership drive allowed us to grow quickly and spread our leaders throughout sites.

Within two years of new leaders in power, the union had doubled membership.

We spent most of our first year on the executive board bargaining salary increases and improving performance-based payouts, using the money won during the walkout. In order to do this, we needed to seize control of the bargaining process, which in our school district is referred to as “meet and confer.”

Our local had a history of being overly conciliatory to management. Our previous executive board signed off on district initiatives without bargaining and had almost no presence on school campuses where important education decisions were happening.

In meet and confer, we brought together a team of our most dedicated members from around the district and worked for months.

We recruited our best and most engaged teachers while telling them that we would need hours of their time for the next few months after work and on weekends. We chose a team that included elementary and middle school teachers, a social worker, and special education teachers to sit at the table, and we solicited the advice of all members in various job positions to ensure that we had a well-rounded perspective when we drafted proposals.

Information from meet and confer was posted on social media sites and sent out through email. We invited everyone to attend, including parents. After each session, we sent out notes and shared updates.

When management was unwilling to talk about a proposal or more forward, we organized by having members speak at board meetings, attend meet and confer, and wear pins during the workday. We held regular meetings around the district. We took quotes from members and surveys to show data on what our bargaining unit wanted and used that at the bargaining table.

However, we weren’t content with just improving salaries. Phoenix Elementary is full of teachers and staff who are dedicated to changing the way low-income students are educated. We know that smaller classes, lower student-to-counselor ratios, and other services like social work and community health centers are essential. To guarantee these, we would need a contract cementing the rights of students and teachers.

After years without one, we needed as much leverage as possible to force the district into a contract. We had to educate our members and the public to get their support. We held what we called a “civic academy” and invited every staff member from our district, as well as parents and community speakers.

The speakers talked about the importance of having a contract. They included union teachers from other school districts, parents, and a state representative. We took down contact information and got people involved afterward by updating them on what we were doing and inviting them to board meetings to speak.

This event was a catalyst towards getting our contract because it showed our school board and administration that parents and community supported us too. After this event, we had at least a few speakers at each board meeting leading up to the board’s vote on recognizing PECTA as the sole bargaining agent and granting us a contract.

In the middle of our contract push, the district announced a plan to close three schools. We knew that our community support and our leverage had finally improved when we flooded our school board meeting with protesters and stopped this plan dead in its tracks. We were proud that we were able to help three important communities in Phoenix keep their neighborhood schools.

The three schools were Dunbar Elementary, which serves one of the city’s historically Black neighborhoods; Emerson Elementary, which houses an inclusive autism program; and Faith North, the district’s only school dedicated solely to the education of preschool students, including those with disabilities. All three schools are home to underserved populations.

In the original plan proposed by the district, Dunbar and Emerson would be consolidated with nearby schools and Faith North would be split among various schools. At the end of the board meeting, the board voted in a split decision to discontinue all talks about school closures and consolidations.

At the end of our second year in office, we finally won the first contract between teachers and the governing board in the history of our district. It included language we had bargained over the last two years on class sizes and on substitute pay for teachers who are teaching students from other classes when their teachers are sick.

We will push to add more to our contract over time, including a salary schedule with clear steps and lanes, but we are excited to have a contract that will memorialize our bargaining process and give the staff leverage to ensure that their workplace rights are followed.

Leanne Abushar is an autism teacher and is the outgoing president of the Phoenix Elementary Classroom Teachers Association.