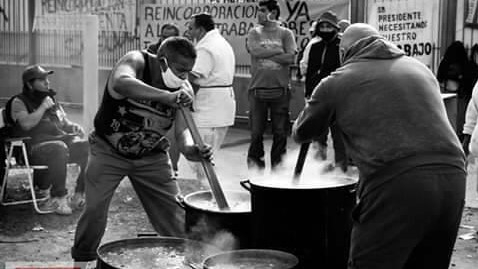 Some Argentinian employers are taking advantage of the pandemic. The meatpacker Frigorífico Penta locked workers out, and they set up camp in front of the plant to demand their wages. Photo: Voz Obrera.

But employers, media, and national union leaders are now pressing the government to end the quarantine, arguing “economic costs." And the quarantine showed the instability of workers' jobs and living conditions. The policies the government launched to protect workers' earnings will not prevent either a general fall in working class incomes or the dismissal of thousands of “precarious” workers, those hired under contracts that give them almost no rights.

Meanwhile, workplace leaders concerned about their coworkers' health are creating collective actions to demand either prevention protocols or the shutdown of their workplaces because they are not essential.

A set of “essential” production and service sectors were exempt from the quarantine, while the work of millions of self-employed and informal workers, such as street vendors and construction workers, was banned. The government launched a set of actions to aid families without earnings (Emergency Family Income) and retired workers (a special bonus) and to pay a portion of wages in shut-down sectors (the Production and Work Aid Program).

The government banned layoffs in all sectors for 60 days, so that even workers who could not come to work had to be kept on the payroll. However, it allowed unions and employers in the non-exempt sectors to cut wages by mutual agreement. On April 29 the industrial employers’ organization (UIA) and the General Confederation of Labor (CGT), the main national union federation, made a general agreement on wage cuts, allowing employers affected by the quarantine to cut wages by 30 percent.

Soon the Trade and Retail Shops Employees Association (AEC), the Autoworkers Union (SMATA), the Metalworkers (UOM), the Textile and Garment Workers (AOT), and others signed similar agreements with their sectoral employers’ associations. Many employers had been cutting wages on their own and many workers were resisting the cuts in their workplaces. These agreements blocked workplace struggles but set minimum earnings for workers in the shut-down sectors.

In silent, daily disputes, hundreds of shop stewards across Argentina negotiate with employers how best to organize work safely. Some bus drivers and some workers in the fruit-packing industry have walked out when conditions were not safe. Migrant workers in fruit harvesting, accompanied by local unions and human rights organizations, denounced both employers and provincial governments for not providing them transport to return home after the harvest ended. After a month of demands, most were able to get back home.

These grassroots actions highlighted a dispute about what sectors, products, or tasks are “essential” during a pandemic. Tire workers asked for companies to reveal their inventories, so workers could decide together how necessary production was and how many people should be called in for work.

Metalworker stewards for Tenaris, a large producer of gas and oil pipes, are in day-to-day negotiations to engage in only essential operations, which they define as those that keep machinery and equipment from failing. The Federation of Workers in the Oil Industry (edible oil, the export core of the agroindustrial chain) managed to set preventive protocols and the stewards supervise their implementation. The protocols stipulate a set of medical controls for dock and ship workers and reorganize the operations in the docks and facilities to maintain “social distance.”

On March 22 supermarket workers in Neuquen province organized demonstrations called aplausazos, calling for either personal protective equipment (PPE) and shorter workdays or for social distancing with customers. At midday they met at the cash registers—maintaining social distance—holding signs saying, “We want to work from 9 a.m. to 6 p.m.” and “If people move, the virus moves” and inviting customers to join the applause.

The action was repeated in some supermarkets in Rosario and Buenos Aires a week later. In Buenos Aires, a manager told protesting workers they should go live in Cuba. .

Big corporations in the food industry assumed they were exempt from quarantine restrictions and tried to continue with normal workdays and production. Workers at one Bimbo facility decided to walk out after an assembly. The stewards denounced the company for wanting to end the contracts of 10 workers who had been working at the plant for more than two years.

At the same time, workers questioned whether the products they make are “essential.” One delegate said: “We have to leave our homes to produce frozen croissants for export. Thousands of workers are coming in to produce unessential goods, risking their lives and the lives of their families and neighborhoods. The national government has to be clear what products are essential.” . Stewards in snack and chocolate factories made public statements in the same vein.

Stewards at Frigorifico Rioplatense, a beef processing company, collected signatures of more than 400 coworkers arguing for closing the plant in line with the quarantine. When managers refused, workers argued for a set of health and safety practices including reduction of operations to those strictly neccesary for Argentina’s internal market.

One of the main labor conflicts in the Buenos Aires metro area is at Frigorífico Penta. The owner took advantage of the emergency to attack workers through a lockout, refusing to pay wages owed and firing elected stewards. After failed negotiations at the Labor Ministry, the workers rallied in front of the plant to demand their wages. Then the police charged, firing rubber bullets and tear gas. Ten workers were wounded and many others suffered from the gas. The provincial Security Minister came to the gates and denied he had ordered the repression.

On April 22, after three weeks locked out, the Penta workers accompanied by other activists and supporters marched for Puerreydon Bridge, a traditional point for social protest in Argentina A th support messages on a Facebook page.

Argentina has the highest percentage in the world of health care workers infected with the coronoavirus (14 percent of all those infected, 374 out of 2,669 as of mid-April). Since last year public sector health workers had been protesting low wages, budget cuts, and being forced to work under “precarious” individual contracts, which give workers almost no rights. Grassroots action at health centers increased with the pandemic. Most actions are socially distanced public meetings in health centers where workers from different unions discuss their petitions to government authorities.

In this video a steward says, “We have to be clear, we need PPE, not general supplies. Our demand must be for PPE from head to toe. If we don’t have that PPE, we can’t work! We’re defending our lives.”
Workers in other hospitals launched social media campaings. With the spirit that they are not heroes but precarious workers, they uploaded photos of groups of workers holding signs with their demands.

Demonstrations and meetings achieved some prevention goals, such as closure of hazardous areas like entrance halls and admission rooms, and provision of effective PPE. Workers denounced long work days, precarious contracts, and the authoritarian behavior of some hospital managers and authorities.

Last but not least, the COVID-19 emergency has spotlighted workers whom their employers label “app users,” not even employees. They are called “heroes” by the media, but the workers denounce their employers’ negligence and their hazardous working conditions.

For the last two years, app-delivery workers from Glovo, Rappi, and PedidosYa have formed unions advocating for better working conditions and recognition as employees. They play an essential role in the COVID-19 emergency, delivering food and medicine.

As one of the strikers said, “The President told people to ask for delivery services, but we that work in delivery are very poorly paid for long working hours and high exposure to infection.” Employers take advantage of this situation by cutting pay and denying even minimum PPE.

Another organizer said, “With COVID-19, our situation became worse. Not only did they just end all bonuses, but they also decreased the price of each delivery.” As these were employers’ global policies, delivery workers organized an international strike on April 22. A video explained their claims: “We demand for all the app delivery workers a 100 percent wage increase, because of the risks we take in this job. This is organized from below, from a grassroots movement forged at the international level. This strike was decided with partners from Spain, Costa Rica, Guatemala, Perú, and Ecuador.”

In Argentina, a lack of workers provoked sizable delays in processing customers' requests. Workers held demonstrations in several town squares around the country. A virtual meeting decided to strike again this Friday, May 8.

More workers are going to the streets to demand wages and working conditions that will keep them from getting sick with COVID-19. Some of these struggles may strengthen workplace organization and grassroots coordination. As everywhere, workers' right to health has to be disputed in the streets, in the workplaces, and in the communities.

Related
Lessons from Labor History for Organizing Amazon »
Inside the Alabama Amazon Union Drive: An Interview with the Lead Organizer »
How We Turned Bargaining Around at Law360 »
China: Leader of Delivery Riders Alliance Detained, Solidarity Movement Repressed »
The BAmazon Loss and the Road Ahead »

the main national union federation, made a general agreement on wage cuts, allowing employers affected by the quarantine to cut wages by 30 percent.