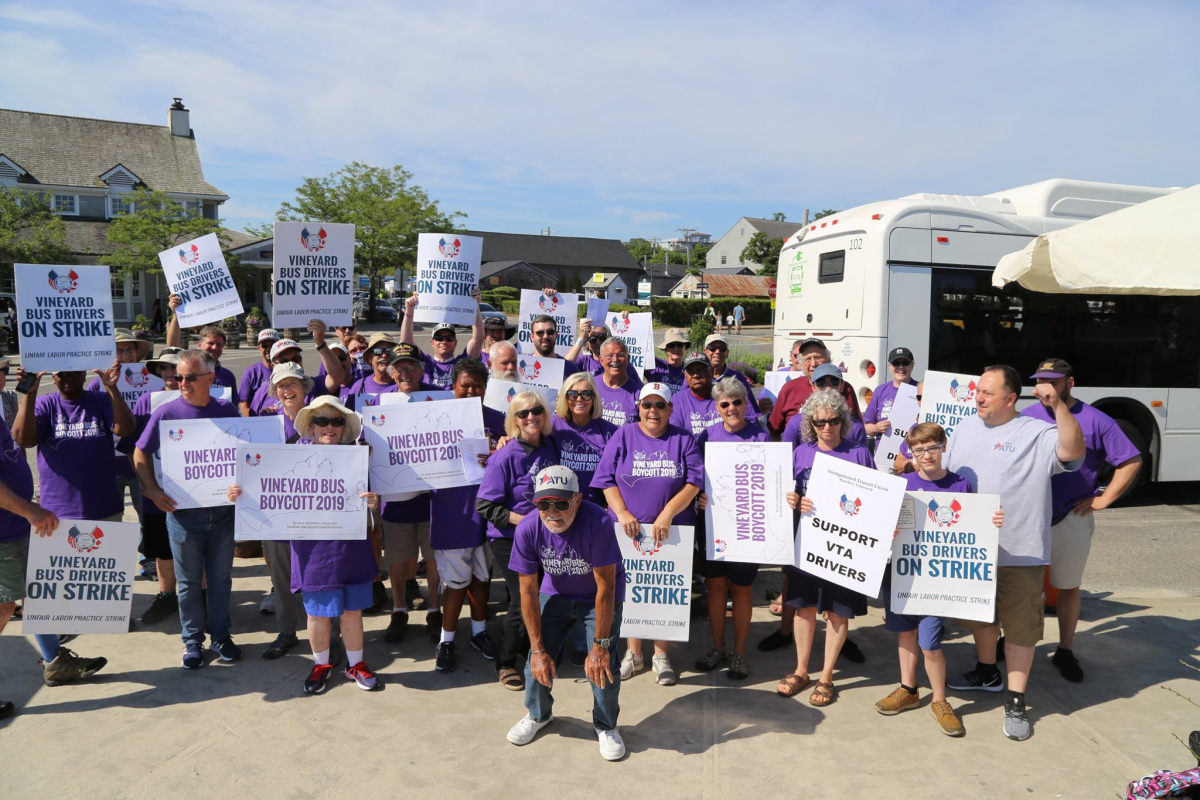 Twenty-five Martha’s Vineyard bus drivers are striking for a first contract, exposing the inequality that exists for working people on an island known as the summer home of the rich and famous. Strikers and supporters picketed at the ferry terminal. Photo: ATU

Twenty-five Martha’s Vineyard bus drivers are striking for a first contract, exposing the inequality that exists for working people on an island known as the summer home of the rich and famous.

The Florida-based company Transit Connection Inc. (TCI) receives public funds to operate the bus system relied on by vacationers and year-round residents alike. So during the strike, taxpayers are literally paying scab wages—contrary to the progressive values often associated with Martha’s Vineyard.

TCI has engaged in anti-union tactics for years. Workers won a union representation election in 2015, but Transit Connection challenged the results and dragged out the process in court, putting off bargaining for months even after a Labor Board decision in April 2018 demanded that it come to the table.

When bargaining finally began late last year, the Transit Union (ATU) put forth one proposal after another, but the company at first offered no counterproposals; it just said no.

When TCI finally began putting up proposals, it was only to offer the exact same thing that its employees already receive, absent a union.

In January, TCI presented another proposal for the exact wages and benefits that are already in its employee handbook. It takes a bus driver 14 years to reach the top wage of $23.50 an hour.

The union engaged a federal mediator, and the two parties sat for three mediated sessions. At the last one in May, the company announced it was putting its last, best, and final offer on table: increasing the top wage to $25.50 and reducing the wage progression from 14 years to 10.

The union is fighting for a five-year progression to top pay. It is also demanding to bar excessive overtime and stop penalizing drivers who refuse to work because of fatigue or refuse to operate buses that fail a safety inspection.

The union believes that the company wanted to force a strike. Workers were left with no choice after TCI walked away from the table.

On July 3 the union offered to enter binding arbitration to end the strike. TCI has yet to respond to the offer.

Nonetheless, the mood on the picket line is upbeat, with support from community members and local unions. The strikers are covering three picket lines—at the ferry, the port authority, and the main bus hub.

In the spring, the company went down to San Juan, Puerto Rico, to recruit drivers and came back with 20 it classified as seasonal employees, outside the union bargaining unit. TCI has also used a couple of companies to provide scab bus drivers. The union has said it will release information soon showing that the scabs are being paid more than both the regular and the seasonal workers.

Because of the scabs, service is running at almost 100 percent—so it will take community pressure for the union to win.

In a press statement the employer called the union an “off-island” group “with an agenda.”

“We do have an agenda,” bus driver Katherine Kavanagh shot back in a union press release. “It’s to get the wages we need to live in the communities we grew up in, and to get the respect that Administrator [Angie] Grant has proven incapable of giving.”