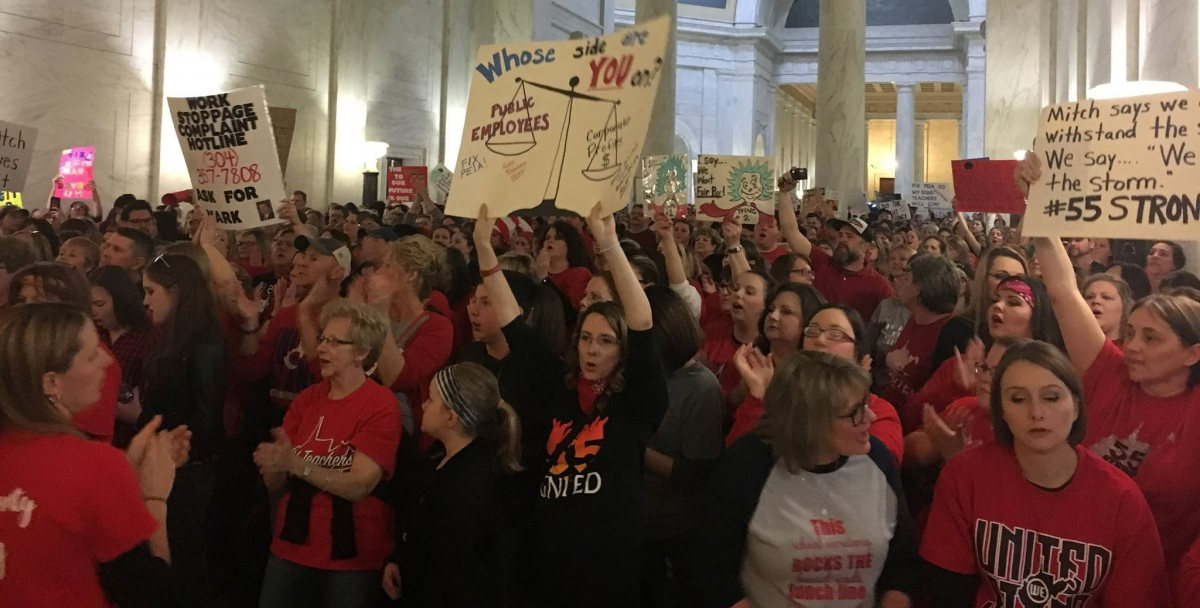 West Virginia teachers and school employees struck for nine days in February and March, detonating an ongoing insurgency by teachers across the country. Photo: Eric Blanc

A group of West Virginia teachers, including rank-and-file leaders of the nine-day strike earlier this year, have launched a cross-union caucus.

The caucus includes members of the West Virginia Education Association (NEA) and the American Federation of Teachers-West Virginia (AFT). It’s an affiliate of the national network United Caucuses of Rank-and-File Educators.

Among its founders are the presidents of several locals, as well as O’Neal and Emily Comer, who together initiated the “WV Public Employees UNITED” Facebook group that helped spur the statewide strike.

“We need a caucus because we’ve seen time and time again that some of the best organizing comes from below,” said Comer, a Charleston Spanish teacher, in a Facebook video introducing the caucus.

“During the walkouts, I noticed that a lot of rank-and-file educators wanted to have a more active role in their unions at the local level, at the state level,” said Monongolia County social studies teacher Brendan Muckian-Bates in the video, “but they felt like a lot of the effort had been pushed toward lobbying tactics and wait-and-see politics.”

“Right now all the unions are saying ‘Remember in November,’” said O’Neal. “We’d love it if we flipped both houses, but we know that the politicians are not going to save us. We want to have a plan beyond November, and we want to get teachers in schools more organized, so that if we need to take action, we’re ready.”

West Virginia teachers and public employees are still fighting to secure funding for their health insurance (known as PEIA), a big driver of the teachers' strike. A PEIA Task Force was established as part of the March agreement to end the strike, but progress has been slow, and many are worried its recommendations will fall far short of what’s needed.

Teacher and school employee unions rallied on September 16 at the Capitol. Caucus members circulated a petition demanding that the money for the health plan come from a natural gas severance tax or corporate income tax.

Caucus organizers are taking a lesson from 1990, when a previous generation of West Virginia teachers went on strike over low pay and underfunded benefits. They won $5,000 in raises over three years, a fully-funded PEIA, and a commitment by legislators to make up a $2 billion retirement funding gap.

The raises won in 1990 brought West Virginia teachers up from the 49th-ranked state for salaries to 34th. By the time of the 2018 strike, they were back down to 48th.

“It really did make a big difference,” said O’Neal, “but we lost that momentum. The caucus is a way to keep that fire going.”