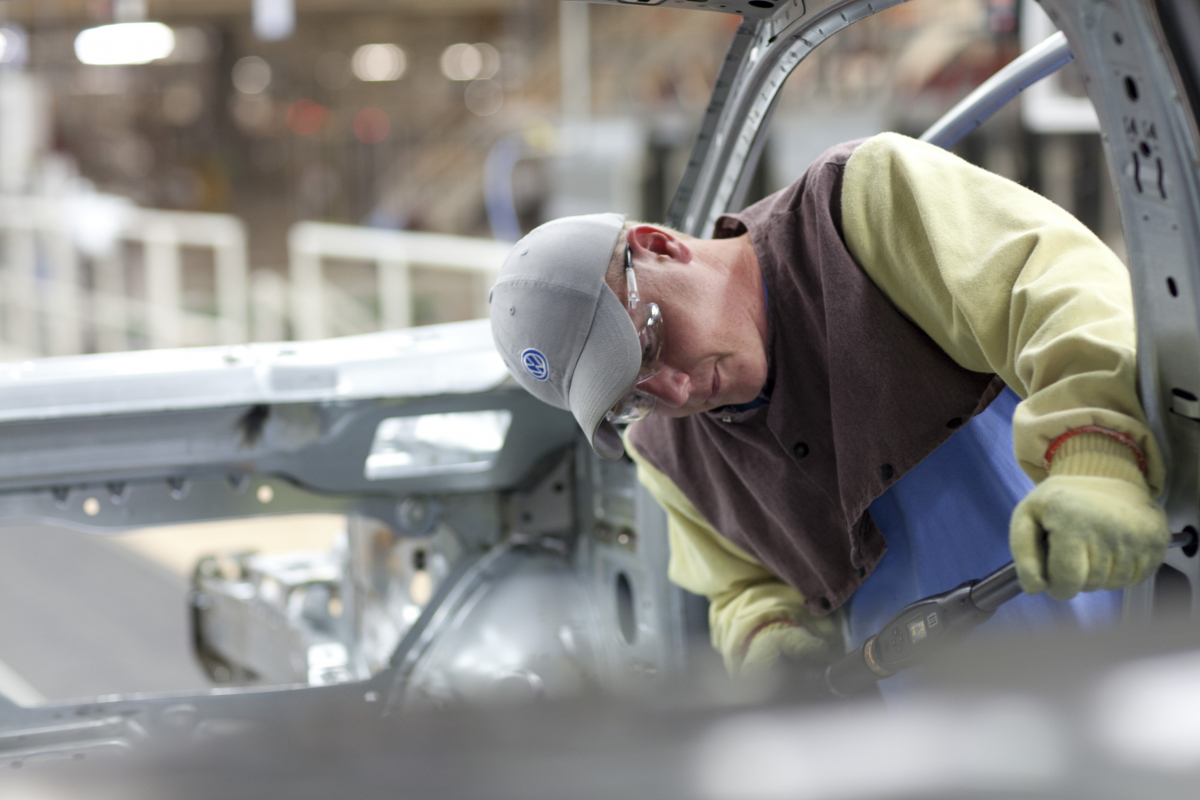 When a union activist pushed for meetings on issues that mattered to rank and filers, he says, the UAW responded by circulating rumors that he was an anti-union mole. Photo: Volkswagen

After losing a high-profile election at the Chattanooga Volkswagen plant in 2014, the Auto Workers won a smaller unit: the skilled-trades workers at the plant. Now a Trump-appointed Labor Board is about to undo even that small victory, stripping the skilled-trades workers of union recognition. In response to this news, auto worker Wayne Cliett reflected on what went wrong in the original union drive. —Eds.

I have worked at Volkswagen for seven years and was a member of the Auto Workers (UAW) leadership committee in the lead-up to the union’s 2014 election loss. I was there from the very first UAW meeting and never missed a meeting in all the years I was involved.

I was always on the frontlines, handing out the leaflets at the gates. I talked to many people on a daily basis, inviting them to meetings, trying to show them what a union could do.

Many times I was referred to as the face of the UAW’s campaign, because of my presence and outspoken support of a union that would benefit the workforce. I was even on the cover of Solidarity magazine, the UAW’s official publication.

Here is my take on the UAW effort to unionize the Volkswagen plant in Chattanooga.

The International operated in such a way to make sure they were always in total control.

The organizers were always telling us just what they thought we needed to know, for fear of some of us workers leaking info to the press. That was the reason given over and over for keeping us in the dark. Many of us, including myself, did not like the secrecy of it all.

The UAW was in constant contact with the company, talking and making deals (so we were told), and none of us workers had first hand knowledge of what was being discussed.

Just before the 2014 union election, we learned that the International and the company had reached this neutrality agreement. We were told what a great advantage we would have going into the election process.

As it turned out, the anti-union forces got hold of the entire agreement and started using it against us, pointing out the part where it talks about the UAW agreeing to work with the company to keep our labor costs and production competitive with the other auto companies. They asked why we would want to join a union whose leaders sold us out in a secret agreement. Many of the UAW supporters like myself were caught off guard. We were not aware of this part of the agreement, because the union never shared it with us.

The staff kept saying how great this neutrality agreement would be for us, but they never mentioned the part about us staying competitive. This is just one example of the International keeping us in the dark.

SHUT OUT OF STRATEGY

The notion that they knew better about how they should organize was questionable to me from the start. I knew they had been after Nissan for over a decade without success. It seemed to me that they maybe needed to try something different.

Some of us finally confronted the organizers from International about our strategy here in Chattanooga. We suggested that we start acting like a working union instead of them pulling all the strings. We wanted to call our own meetings and raise issues that mattered to the rank-and-file worker. UAW staff organizer Chuck Browning told us, “That will come sometime later down the road.”

We were tired of being kept in the dark “for our own good.” We wanted to be a part of the process and were being shut out.

During the few years that International was there organizing, I was told about three people they suspected of being moles for the opposition. I never publicly repeated those names and never will because it would serve no meaningful purpose.

In the end, I was shocked to learn that I was the one that the UAW considered to be the mole. Word got back to me that some of the International organizers were saying to individuals that I was granddaddy mole of them all.

Why? The staff said it was because I dared to be friendly with the anti-union workers in the plant. But these were the people I work with and see every day. How will we ever win them over if we don’t talk to them?

It is likely, though, that it was retaliation for daring to question their strategy.

Based on my experience, it is clear that the UAW has absolutely no clue how to run an organizing drive in the South or anywhere else.

Peace and solidarity to all.

Wayne Cliett works at Volkswagen’s plant in Chattanooga, Tennessee. He was active in the 2014 UAW effort to win union recognition there.

I worked in a unionized manufacturing plant, different industry, in the late 90's and early 2000's. The union was ultimately the reason we shut down because we could not compete with the overseas labor costs.

It was this kind on junk that kept the union in Arlington from making a deal for so long!
Took them and GM almost two months to figure it out.

I believe that unions and manufacturers must do away with the cloak of secrecy. This hurt our chances of negotiating during our talks.