Resources for the Rank and File: An Interview with Robert Schwartz 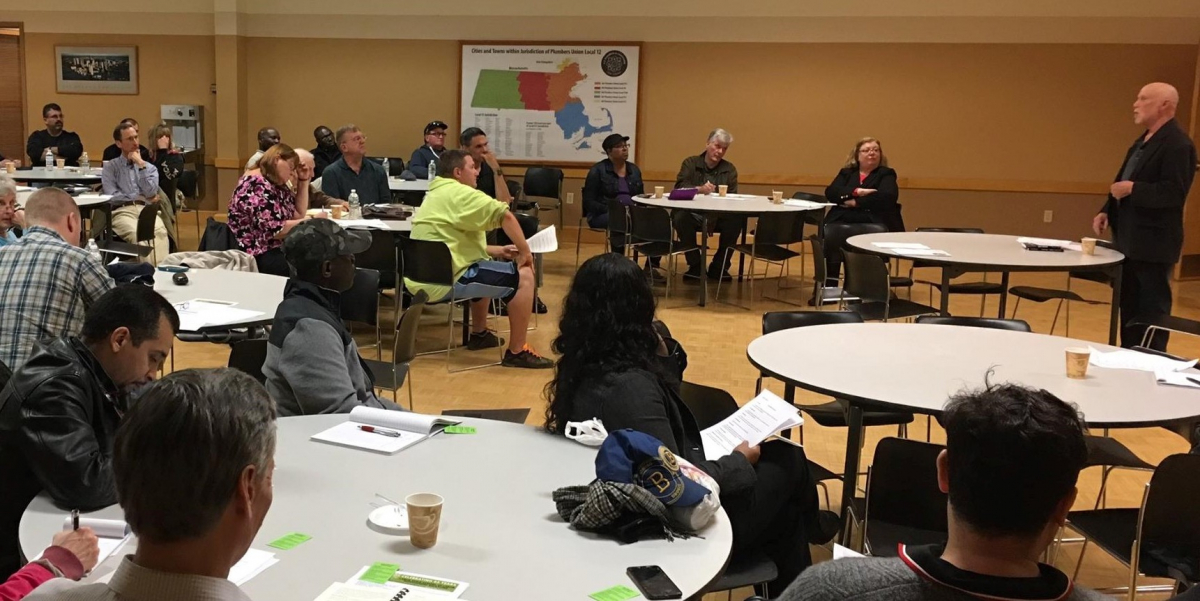 Robert Schwartz speaks on "Unlocking the Mysteries of Just Cause" at a Labor Guild workshop in Massachusetts. Photo: Rand Wilson

Labor lawyer Robert M. Schwartz, author of The Legal Rights of Union Stewards, has generously turned over his five immensely popular handbooks to Labor Notes. We asked Schwartz about his experience writing and publishing the books.

Labor Notes: What led you to write labor law handbooks for union representatives and rank-and-file workers?

Schwartz: During the 1980s I worked for the Massachusetts state labor board. One of my duties was serving as “officer of the day” answering calls from the public. I quickly realized that there was a deep hunger for reliable information about workers’ rights along with an almost complete absence of materials from the agencies charged with enforcing the labor laws.

This spurred me to write a book called Your Rights on the Job about employment laws in Massachusetts. It featured “socialist realist” illustrations by artist David Fichter.

The success of Your Rights encouraged me to write other books, especially for union readers. These now include The Legal Rights of Union Stewards, The FMLA Handbook, How to Win Past Practice Grievances, Just Cause: A Union Guide to Winning Discipline Cases, and No Contract, No Peace: A Legal Guide to Contract Campaigns, Strikes, and Lockouts.

How have the books been received?

Better than I expected. The Legal Rights of Union Stewards, now in its sixth edition, is the most popular, with more than a million copies in print. The FMLA Handbook and Just Cause have also sold very well. The smallest sales have been for No Contract, No Peace and its predecessor, Strikes, Picketing and Inside Campaigns.

Why do you think that book lags behind?

Many unions have (mistakenly in my opinion) turned gun-shy about strikes, in part because of the increased use of permanent replacements.

Do you think your books have made a difference?

I hope so. Stewards and union officers tell me that the books have helped them to win grievances and arbitrations and have given them more confidence to perform their duties.

Do you ever worry that union representatives will use the books to become “shop lawyers”?

Yes. I would not like readers to become so enamored with filing legal charges that they lose their enthusiasm for traditional methods of putting pressure on employers, such as noncooperation campaigns, picketing, and walkouts.

I always say that the best way to enforce a legal right is to combine legal and direct action. Of course, I know this advice is not always followed.

I sometimes have a nightmare that an angry steward will write that she has been fired for asserting a right she read in one of my books. Fortunately, this has yet to happen.

Have you enjoyed putting out the books?

What do you think accounts for the popularity of the handbooks in an age when many rely on Google to answer their questions?

Thanks in part to designer/illustrator Nick Thorkelson, the books are easy to read, with short sentences and paragraphs, questions and answers, lots of white space, and plentiful cartoons. The spiral binding, which is rarely seen anymore, allows the books to be opened flat and makes them long-lasting.

Has labor law changed much since you started writing in the 1980s?

In the 1980s, labor law was heavily influenced by NLRB members appointed by Ronald Reagan. These judges issued a plethora of decisions weakening union rights to organize, bargain, and strike.

The Obama Labor Board aggressively enforced the National Labor Relations Act, issued valuable new precedents, and reversed many Reagan-era holdings.
Now the pendulum has swung sharply to the right, as President Trump’s labor appointees are uniformly hostile to unions.

Why are you giving rights to your books to Labor Notes?

Labor Notes, with its wide network of contacts and supporters, should be able to bring the books to the attention of an even wider audience. Hopefully, income from the sales will enable the organization to increase its creative services and union assistance, so needed by the labor movement in these perilous times.

Robert Schwartz has been a frequent contributor to the pages of Labor Notes over the years. Here are a few highlights. For more, check out his Work Rights Press catalog at Labor Notes.

Working without a Contract: A Strategy Whose Time Has Come?
Representing Members at Investigatory Interviews
Got Unfair Labor Practices? Put 'Em to Use
Time to Update the Union Handbook on Just Cause
Getting the Most Out of Information Requests
FMLA Doctor's Notes: What Unions Need to Know
Everything You Were Afraid to Ask about Lockouts

Related
The Hows, Whys, and Whats of ULP Strikes »
BREAKING: Draft Legislation in New York Would Put Gig Workers into Toothless 'Unions' »
Viewpoint: Who Invited Them? Employers Like Amazon Should Have No Say in How Workers Organize »
Will the Supreme Court Overrule Farmworker Union Rights? »
Trump’s Anti-Worker Labor Board »

It would be very helpful if Schwartz's books were available as ebooks.