Permanent Replacements? Not So Fast, Labor Board Says 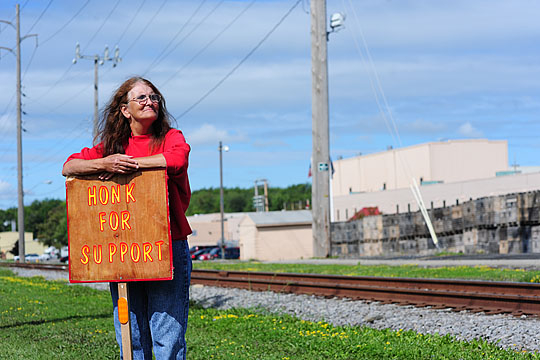 A game-changing ruling says employers shouldn't use replacement as a weapon against strikers. The threat of replacement is what pushed Mott's plant workers to end their four-month strike in 2010. Photo: RWDSU Local 220.

A game-changing interpretation from the Obama-appointed National Labor Relations Board has narrowed the allowable reasons why an employer may hire permanent replacements during a strike.

Employers frequently use Mackay to defeat strikes. Some unions don’t even consider hitting the bricks because they’re afraid that workers’ jobs will be taken away.

Despite fierce criticism, Mackay’s legal edifice survived intact for almost 80 years. The only way unions have found to avoid it is to contort walkouts to qualify as unfair labor practice strikes (to which Mackay does not apply). But the NLRB often denies ULP status, and unions must often wait years for a ruling.

The Labor Board announced its new standard in a case involving SEIU/United Health Care Workers West American and Baptist Homes of the West, doing business as the Piedmont Gardens Nursing Home.

Building on a relatively timid 1964 decision, the Board ruled forcefully that an employer may not hire permanent replacements if one or more of its reasons conflicts or interferes with workers’ rights under the National Labor Relations Act (NLRA).

The evidence in Piedmont Gardens was clear-cut. The nursing home’s executive director admitted she had acted on a belief that permanent replacement workers “would come to work if there was another work stoppage.” The company lawyer told the union lawyer that the employer “wanted to teach the strikers and the union a lesson.”

Under the Board’s new standard, these motives—forestalling future walkouts and punishing strikers—made the replacements illegal. That’s because the NLRA bans retaliating against employees for exercising their right to collective action. The nursing home was ordered to reinstate the displaced strikers and make up their lost earnings.

Moreover, it places the burden on the union to produce credible evidence that the employer has a retaliatory motive, not simply a desire to retain profits and customers. In other words, the union must come up with a "smoking gun.”

So, how can a striking union put the new rule into practice? To start with, it must carefully monitor (using information requests if necessary) whether the employer is hiring permanent as compared to temporary replacements. If so, the union should tenaciously question company officials, supervisors, and lawyers about the reasons.

If one of these officials lets slip a notion, hope, or speculation that the hiring will cause strikers to desert, teach workers a lesson, or otherwise weaken the walkout, the union should file charges with the NLRB (or the appropriate state labor board, in states where public employees are allowed to strike). The charge should be accompanied with a request that the agency seek a court injunction against further hiring.

In some cases it may be possible to cite anti-union hostility expressed before replacements were hired, as evidence of the employer’s illegal mindset. To rebut the employer’s defenses, unions may cite the availability of temporary employees at the same or lower wages.

(By the way, the employer may not be able to avoid liability by secretly hiring replacements. At least one court has ruled that such conduct implies an illegal motive.)

The two-member Board majority downplayed the impact of its ruling, perhaps to reassure the Supreme Court in the event of an appeal by the nursing home. The decision asserts that “the use of permanent replacements for unlawful purposes is not a frequent occurrence.”

In a caustic dissent he warned: “The majority’s subjective standard will effectively preclude many employers from using permanent replacement as a legitimate economic weapon, contrary to Supreme Court precedent stretching back almost to the enactment of the Wagner Act itself.

“Any stray comment that reflects negativity towards strike participants—whether made by an executive, manager or supervisor—could create a risk of potentially ruinous financial liability. The risk of such liability will no doubt sharply curtail the lawful use of permanent replacement as a legitimate economic weapon.”

Oh, that this should come to pass!

Retired labor lawyer Robert Schwartz is the author of No Contract, No Peace: A Legal Guide to Contract Campaigns, Strikes, and Lockouts.