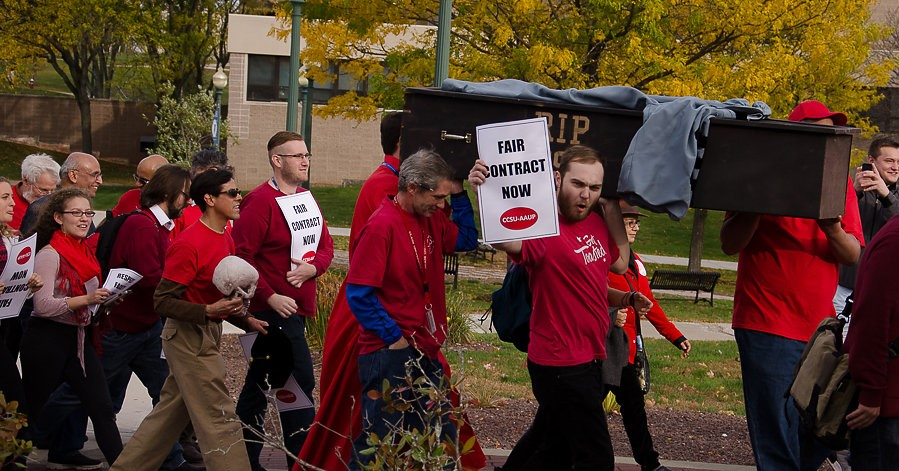 For the third time in eight years, public sector workers in Connecticut have voted for concessions, and it is labor’s so-called friends who have hurt it the most. Photo: Gayle McDermott.

For the third time in eight years, public sector workers in Connecticut have voted for concessions. State employees have sacrificed a total of $7 billion to close budget deficits in 2009, 2011, and now 2017.

With Connecticut existing in a perpetual state of red ink, the unions' State Employees Bargaining Agent Coalition (SEBAC) opened its 2011-2022 agreement and negotiated a new deal that will save the state $1.5 billion in the next two years and $24 billion over 20 years.

SEBAC, made up of 15 unions representing 34 bargaining units and 46,000 employees, was created by statute in 1986 to negotiate pensions and health care. (Connecticut is one of only four states where public sector pensions and health care are collectively bargained; in others the legislature sets terms unilaterally.) Contracts covering all other issues are negotiated separately by each union.

In exchange for these givebacks, the unions received a four-year guarantee of no layoffs and a five-year extension of the structure of the pension and health care system until 2027. And they were assured that each bargaining unit’s local contract would be accepted by the legislature.

Although the concessions were clear, it's the politics behind the agreement that are troubling.

Public employees were forced to the table because the state budget faced a $5 billion shortfall over two years, conservative forces were resurgent and vocal in their anti-union rhetoric, and the state’s Democratic Party was paralyzed by poor leadership and a fear of raising taxes. With Democratic Governor Dan Malloy (elected by the unions) threatening 4,200 layoffs, concessions were a foregone conclusion.

Connecticut's wealth is staggering. Last year, it ranked second in the nation for the number of millionaire households, with 7.4 percent of all the state’s households in that club. This year, the state had 17 billionaires, 12 of whom live in one town, Greenwich.

Business has also prospered, despite complaints to the contrary. A 2016 survey of Connecticut business reported that profits were at a 10-year high, and in 2017 alone, tax breaks to companies totaled $707 million. Connecticut insurance giant Aetna reported that it made $15.5 billion in profit in its second quarter alone.

This wealth, however, is not shared by all Connecticut residents.

Connecticut also has one of the worst school achievement gaps, with black and Latino students scoring much lower than whites on standardized tests.

Not surprisingly, the state’s tax structure reflects the interests of its wealthy residents. Corporate tax rates are some of the lowest in the country, and the top marginal rate of its income tax is less than in most neighboring states.

Since the 2008 recession, the state’s job growth has been sluggish and wages have declined. As a result, income and sales tax revenue collected from workers has fallen. This leaves Connecticut reliant on tax receipts from the super-rich. But because of the relatively low tax rate on corporations and the wealthy, when there is volatility in financial markets (as there has been in international hedge funds), the state cannot collect enough revenue to balance the budget, and like clockwork, social services, education, and public sector jobs go on the chopping block.

The budget also suffers from a huge unfunded liability for state workers’ pensions, a consequence of politicians lowering taxes on the rich. In order to offset tax breaks for corporations and the wealthy in the 1980s and 1990s, lawmakers worked out earlier concession deals with SEBAC, permitting the state to contribute less to pay off the liability than was mandated by a 55-year agreement made in the 1970s.

As in other states, right-wing organizations such as the Yankee Institute, the Connecticut Business and Industry Association, and the State Government Leadership Foundation have pushed an anti-labor agenda that depicts public employees as the public enemy, with state workers painted as the main cause of budget problems.

These groups have bolstered the GOP in the legislature, reducing the Democratic majority to just seven seats in the House, with an 18-18 tie in the Senate. In the most recent legislative session, emboldened Republicans attacked collective bargaining, introducing more than 100 bills against it and against public employees; 70 of these received a public hearing, though none got out of committee.

But it is labor’s so-called friends who have hurt it the most. Governor Malloy uses SEBAC concession deals like an ATM, as he refuses to address Connecticut’s unequal tax structure. The Democratic Party does little other than asking that workers “do their part” for the state. Three conservative Democrats, demanding “systemic reform,” threatened to scuttle the recent concessions deal because it was not harsh enough. Progressive voices in the state are too weak and divided to lead change.

Both Democrats and Republicans argue that raising taxes to solve the state’s budget crises will cause corporations and the wealthy to flee the state, despite no evidence to support this claim. In fact, the number of millionaires and billionaires has increased in the past eight years. GE and Aetna both said that it was not taxes, but access to a highly educated workforce and better lifestyles in Boston and New York, that prompted their moves.

Compared to other states, Connecticut has high levels of unionization, yet labor is struggling to influence state politics and public opinion. Despite a number of large and progressive unions, there is little evidence of a labor movement in the state.

Because every SEBAC agreement has been reopened, Connecticut public employees (and their politicians) know that they will pay again in the future. SEBAC did not set out a Plan B, or a political strategy to end this downward spiral.

SEBAC leaders are very concerned about a Republican takeover of the state in the next electoral cycle. In trying to derail “the express train to Wisconsin” (as SEBAC calls it), labor relies on other entities instead of mobilizing its own members. SEBAC leaders are happy to join in coalitions with other progressive groups to pressure, or elect, politicians, such as the social justice, consumer, and faith-based organizations in the “Due Justice” coalition, and they are thinking of resurrecting the Legislative & Electoral Action Program group. But SEBAC does nothing on its own and does not sufficiently mobilize union members to participate in those coalitions.

To keep the state from looking like Wisconsin, SEBAC will have to change the way it operates. The political space for concession deal after concession deal is narrowing; the unions cannot kick the can down the road indefinitely. SEBAC needs to change if state workers are to defend their wages, pensions, and health care.

First, SEBAC is reluctant to fight on its own now as it has at different times in its past when it pushed progressive legislation (pay equity for women) and fought demands for wage freezes (from Republican Governor John Rowland in 2002). SEBAC needs to rediscover its own fighting spirit and voice.

Second, SEBAC is too far removed from its own rank-and-file members. Workers do not understand how it works or its legal purpose. It is too leadership-driven, with little opportunity for state workers to be involved. Last month's concessions, for example, were a top-down affair with all the details worked out without membership input.

Finally, public sector workers in Connecticut are atomized and disconnected from one another, with employees in one bargaining unit having little interaction with those in another. If rank-and-file workers were not so isolated, they could force their respective union leaders to work better together on their behalf.

Concessionary bargaining will not keep Connecticut from moving toward Wisconsin. Only collective action by union members can accomplish that.

John O’Connor and Louise Williams are professors at Central Connecticut State University. O'Connor is a member of the CCSU-American Association of University Professors Council there and Williams is the CCSU-AAUP chapter president.

This is a sober assessment of the political challenges facing state workers. To my recollection it is the first article by union officials to criticize the despicable role of CT Governor Dannel Malloy and the Democratic Party.

In a state controlled by the Democratic Party, the threat of the “express train to Wisconsin” was nonsense - a ploy by labor poodles to frighten workers into accepting givebacks.

The concession surrender was orchestrated through the State Employee Bargaining Coalition (SEBAC), which essentially acts as an arm of the state government.

This article is a refreshing break from the silence and politics of denial that have characterized discussion of the concessions.
My own take on this from an earlier post: