Viewpoint: The Boeing Vote Was Not a Referendum on Organizing the South 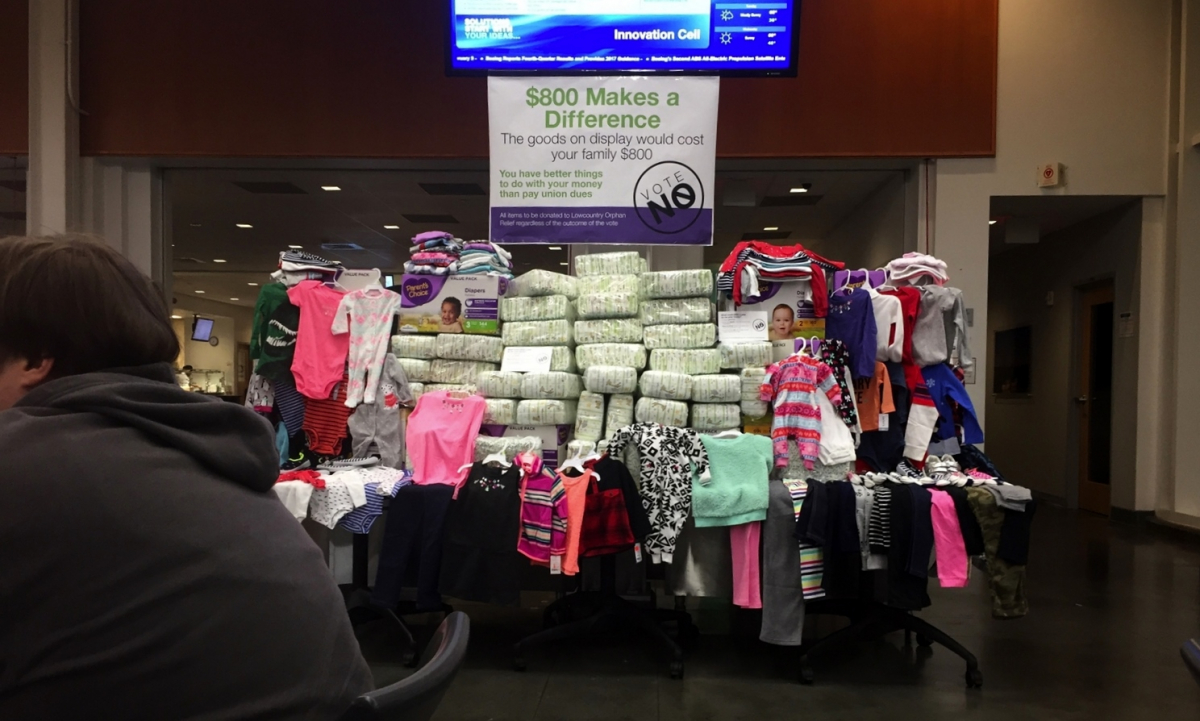 Boeing management installed in the plant’s break room an enormous display of $800 worth of diapers and baby clothes, representing the amount that workers would pay in yearly dues. Photo: International Association of Machinists

The Machinists’ loss in the February 15 union vote at Boeing was devastating. Out of 3,000 workers eligible to cast ballots at the Charleston, South Carolina, plant, 2,097 voted against unionization, and only 731 in favor.

But contrary to the armchair wisdom of pundits, this vote was not a referendum on whether or not it’s possible to organize in the South.

Management forced workers to attend captive-audience meetings where, according to Bloomberg News, supervisors claimed that production could be moved to China if the plant unionized. They even installed in the plant’s break room an enormous display of $800 worth of diapers and baby clothes, representing the amount that workers would pay in yearly dues.

And the union was up against enormous odds, in the state with the lowest union membership levels in the country. Just 1.6 percent of South Carolina workers belong to a union.

If this loss means anything, it’s a stark lesson in the intensity of organizing that is necessary if unions are to succeed in hostile environments.

Since union membership is so low in the South—and since labor isn’t doing a lot of large-scale organizing anywhere these days—any time there’s a big union vote in a Southern state, we see a surge in overblown commentary about the significance of a single campaign, like South Carolina’s Post and Courier calling the election organized labor’s “biggest defeat in decades.”

In this case the symbolism was heightened because Boeing had admitted in 2009, when it moved production of its 787 Dreamliner to the Republican-dominated, right-to-work South, that this was retaliation against workers in Washington state.

“Company executives made it clear,” Machinists District Lodge 751’s Larry Brown explained in Labor Notes, “that the unionized workforce’s tendency to strike was the reason for Boeing’s departure from its traditional home for final assembly.”

After moving the 787 to South Carolina, Boeing went further, threatening to ship production of its next generation of jetliners down below the Mason-Dixon Line if the Machinists in Washington didn’t agree to open up their collective bargaining agreement and accept concessions.

Boeing’s initial proposal was resoundingly voted down, but the company regrouped for another push. On the second try the concessions were narrowly approved by a deeply divided union membership facing the double-barrel threat of lost production and the inability to strike while under contract.

Seattle’s Boeing workers had their pensions frozen and suffered huge increases in their health care costs.

The 30,000 Boeing workers in Washington’s Puget Sound region form the largest bargaining unit in the Machinists union—and Boeing is the largest and most profitable airplane manufacturer. This contract sets the standard for the rest of the union.

So like the Auto Workers (UAW) at the Big Three, the Machinists union has only one option for protecting its gains and winning back what it has lost: it must organize in the South.

I was deeply disappointed in the outcome of this week’s vote in South Carolina—but not shocked. Truthfully, I had a feeling of déjà vu. The Boeing vote reminded me of the UAW’s failed vote at Tennessee’s Volkswagen plant, three years earlier almost to the day.

It’s traditional in union drives to do house calls, where union activists and staff visit workers and their families to talk through workers' rights, issues on the job, and strategy to win in the security of their own homes. But like the Auto Workers in Tennessee, the Machinists performed no house calls—even though the union already had a list of employee names and addresses from its aborted 2015 union election.

The union relied instead on mailers, radio, and social media—none of which have the persuasive power of face-to-face conversations.

To get union authorization cards signed and track support, the Auto Workers and the Machinists each relied solely on worker-led organizing committees. That’s not a bad thing—an organizing committee is the linchpin of any successful union drive. But success hinges on that committee’s size, strength, leadership qualities, and activities.

The best organizing committees recruit respected workplace leaders from all areas of the plant. They mobilize their co-workers into a series of actions on shop floor issues that are widely shared and deeply felt.

Escalating public actions help to break down fear, build solidarity, and make the union feel real. Participants get exposed to the exhilaration of collective action and move beyond fear.

In this respect I watched the union drive at Volkswagen fall short. The Auto Workers failed to recruit enough leaders from around the plant. In the lead-up to the vote, some workers were never even “assessed” to find out whether they would support the union drive, because there was no organizing committee member in their work area.

On top of that, union staff policed the union’s neutrality agreement with Volkswagen, which effectively prevented workers from organizing shop floor actions against the company. This meant that the union had no way to judge whether its organizing committee members could actually move their co-workers into action—or to assess the depth of actual support that the union had from workers who had done nothing more than sign a card.

A strong organizing committee is also the best defense against an employer’s anti-union strategy.

While Boeing’s anti-union campaign was on full display, the Machinists wouldn’t tell reporters how many cards they had collected—nor the size of the organizing committee, which to be fair, not many unions do. Far more concerning was that the union’s worker leaders were too scared to talk to the media about their campaign.

According to the union, there was no escalating campaign strategy in the plant. And what community engagement the union had seemed to come in the form of moral support, rather than enlisting the community into pushing back against the company’s anti-union campaign.

Workers unionize because they want to make changes on the job. They have to believe they are capable of taking on the boss and winning.

Actions like rallies are tests for a union to gauge its depth of support. Workers who are too scared to attend public actions, like the meagerly attended rally the Machinists organized two days before the election, are not going to rally their co-workers to vote for a union. Two days before the vote, the union publicly failed a major test.

These were all warning signs of an impending loss.

The Auto Workers and the Machinists faced tough battles at Volkswagen and Boeing—but they knew that going in. These losses should remind us that, if unions are going to win, they have to build fighting organizations that are publicly led by the workers themselves.

After all, it’s their union to win—or to lose.