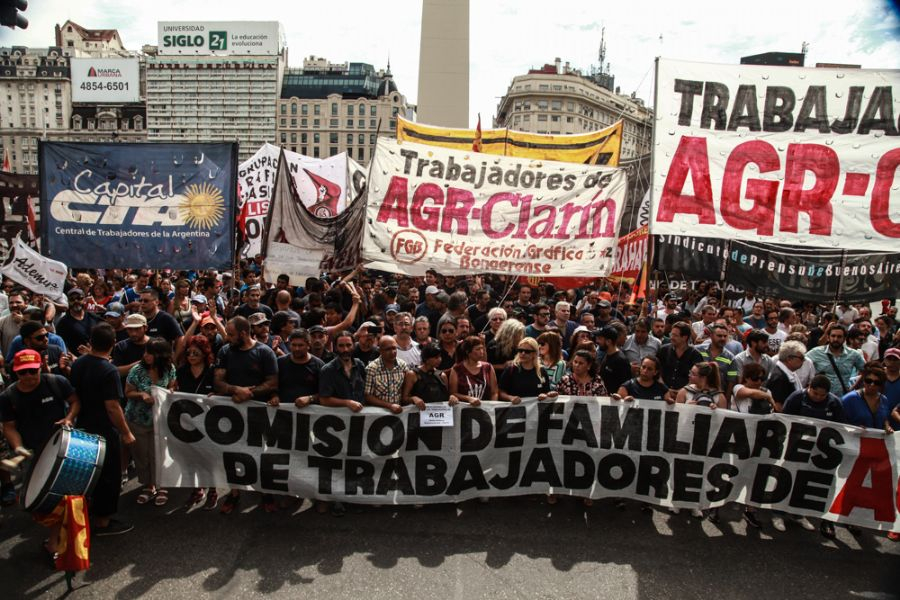 Workers in Buenos Aires, Argentina, are occupying a printing plant owned by the country's biggest media group, after management locked them out as part of a plan to replace well-paid union workers with cheaper, non-union replacements. Photo: Prensa ATE

Printing plant workers in Buenos Aires showed up for their 6 a.m. shift as usual last Monday, only to find locked doors, police, and private security blocking their way. Grupo Clarín, the biggest media group in Argentina, had locked them out. The 380 workers were fired, with management planning to replace well-paid union workers with cheaper, non-union replacements.

Imagine if Fox News also owned the New York Times plus a cable company, Internet providers, a slew of publishing houses, and radio and TV stations. In Argentina, the equivalent is the hugely powerful Grupo Clarín, which runs the largest newspaper in Latin America and heavily promoted the candidacy of Argentina’s right-wing president Mauricio Macri, who was narrowly elected in 2015.

Macri’s comment on the lost jobs at the printing plant was “one business with a problem closes, but at the same time, many more are opening up.”

Local union leaders quickly called an assembly, and workers unanimously decided to occupy the plant to demand their jobs back. The union says that Grupo Clarín is not in financial trouble, did not follow the steps the law requires for layoffs, and simply wants cheap labor.

The Buenos Aires-area graphic workers union that the local belongs to, the FGB, then called a 24-hour solidarity strike of all its members—and got an impressive 83 percent participation. Both the local, which is run by an opposition caucus, and the FGB called for solidarity marches. On Thursday, on two days’ notice, thousands of members of other unions marched through downtown to the Ministry of Labor.

Pablo Wowk works on a three-stories-high press that is the largest in South America. He says the Clarín plant’s machinery, which prints pamphlets, phone books, school books, and magazines, is modern but requires skill to operate—lots of “tricks” to make the machines run right.

None are functioning now, as workers settle in “until we get our jobs back,” said Ezekel Gatti, a member of the local leadership. He said management had given no prior notice of the planned lockout.

Union members from a mattress factory have brought mattresses to sleep on, replacing the cardboard used the first night, and Coca Cola workers have donated plenty of their own product. Other unions and activists are providing food. On Friday night, singers who are struggling to reform their musicians’ union performed opera solos including “O sole mio” in front of the plant gates, to great applause from the crowd of supporters.

On the occupation’s second day, police attempted to remove workers’ families and other supporters from outside the gates, a confrontation that was broadcast by a non-Clarín outlet. For now the union has obtained an order preventing the police from moving in.

At the boisterous march, union delegations, who carried huge banners and union flags, included teachers, port workers, maritime workers, leather workers, subway workers, court workers, metal workers, city and state employees, and even the lifeguards union. Both the more conservative CTG labor federation to which the FGB belongs and the more militant CTA were present. Many union caucuses marched with their own flags, banners, and vests.

Daniel Ximenez, a founder of the Labor Studies Workshop (TEL in Spanish), a union-education organization, said the uptick in solidarity was important: “There have been many strikes, road blockages, marches, and demonstrations this year, but this strike is one of the few called by an important union to support a strike in one plant.”

The action is also important because it’s against the Grupo Clarín monopoly, says Wowk: “If they can get rid of us, they will come after other graphic workers next.”

A day of protests at Grupo Clarín properties nationwide—including its cable and Internet division, local newspapers, radio stations, and TV stations—has been called for Tuesday.

This was just one of many demonstrations at Grupo Clarin properties around the country. The Buenos Aires protesters blocked the highway for about 3 hours.
Here is a song from supporters outside the occupied plant: https://m.facebook.com/story.php?story_fbid=1211637032207054&id=10000082...

Thousands of supporters came to a Grupo Clarin TV broadcasting station this morning and blocked a major 10-lane highway in the heart of Buenos Aires. Police were nowhere to be seen as we walked up the ramps. Normally the newscasters from Clarin's 'Todas Noticias,' a 24-hour news show, sit in a big glass-walled room with the highway as their background. Today the room was empty, as what seemed to be thousands of people from an unemployed organization, teachers (who are on their summer holiday), and other unionists came to demand the printing plant workers' jobs back. Everyone wants to beat Clarin because of its role in promoting right-wing candidates.