Minnesota Nurse: After a Month on Strike, We’re Not Backing Down 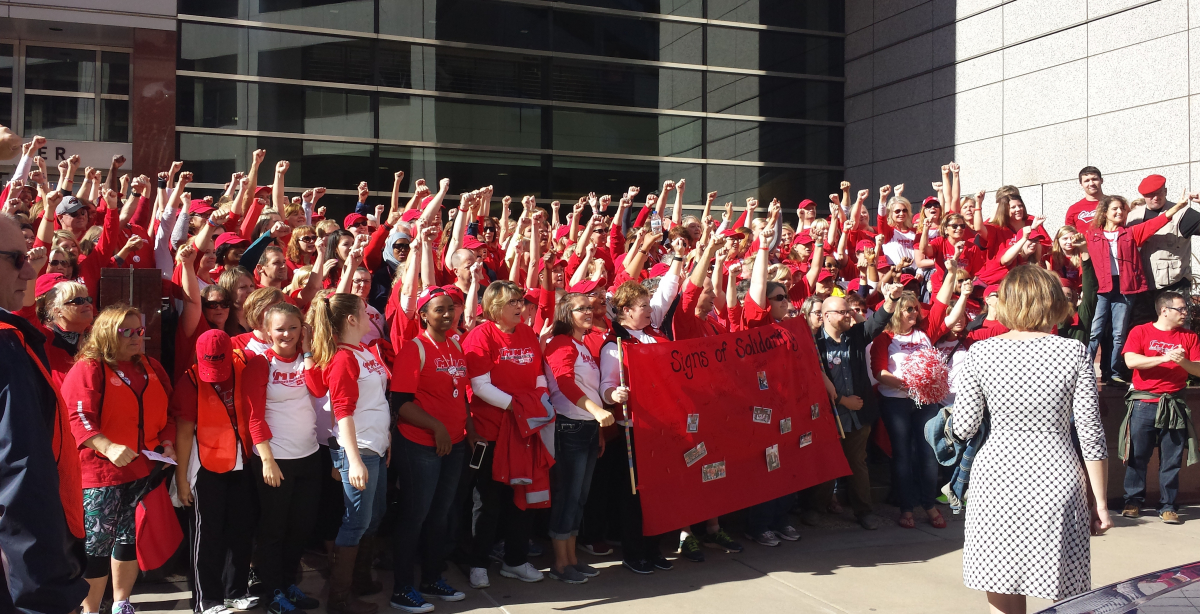 About 350 striking nurses and allies marched to the Securian Building in downtown St. Paul on October 5 to drive home their message to Securian CEO David Kuplic, an Allina board member. Photo: Dave Kamper

Editor’s note: A month into their strike, 5,000 nurses at five Twin Cities hospitals are holding strong. A majority voted on October 3 to reject the Allina hospital chain’s latest contract proposal.

This open-ended strike, begun on Labor Day, follows a weeklong walkout in June. A key issue was Allina’s demand that the nurses trade their hard-won health insurance for a mediocre, low-coverage plan. The nurses have sacrificed on other issues over the years to maintain plan options with zero deductibles and low or no co-pays.

By the time they walked out a second time on September 5, the nurses had floated an offer to phase out their traditional health plans over three years—but even this wasn’t good enough for Allina. Nurses had to wonder whether something deeper than health care costs was behind the company’s stonewalling.

“In my mind, and many of our minds, it’s just about union-busting,” bargaining team member Gail Olson, a 30-year nurse, told Labor Notes on day two of the strike. “We’re the biggest hospital system in the Twin Cities, and if they can beat us back, they’ve got free rein to make benefits and conditions worse for nurses across the city.”

Here’s her take on the contract rejection and what’s next:

After a 14-hour negotiation session on September 29—day 25 of the strike—our negotiating team decided it was time to take the employer’s latest proposal to the nurses for a vote.

Here’s what bargaining has been like: every proposal we made resulted in a worse counter-proposal. We would agree to an item, such as a monetary incentive to encourage nurses to move to Allina’s corporate insurance plans sooner—expecting that they would concede on one of our issues, like staffing or cost-sharing on our insurance premiums. But it wouldn’t happen.

The employer has tried to third-party the union all along, implying that the bargaining team doesn’t represent the nurses. So our team decided to remain neutral, not recommending a yes or no vote, to let our co-workers decide without our influence.

We felt that nurses had been on the picket lines for four weeks without pay and we needed them all to weigh in. Could people stick it out longer and pressure the employer further, or had they sacrificed enough?

We held several all-nurse meetings over the weekend to prepare nurses for the October 3 vote. Nurses asked intelligent questions. From the moment the contract proposal was presented, they could see that it lacked several components required to make it fair.

Our number one issue is staffing. Allina is refusing to agree to a staffing proposal that actually adds staff. We asked for charge nurses (experienced nurses who run their units, assign patients, and act as a resource for others) to be free of patient assignments on all shifts and not to be counted toward the nurse-to-patient ratio.

They proposed a labor-management committee to “look at” the issue, and we offered to agree. But we wanted mediation and binding arbitration if the committee could not come to consensus on how to resolve the staffing problems on some unit. The employer would not agree to that.

We also had major concerns on the employer’s health insurance proposals, including cost-sharing. We want “no diminishment of overall benefits” language to remain part of the contract, protecting the benefits in both our union plans and Allina’s corporate plans.

And we’re concerned about the inequity of losing a valuable benefit without some fair compensation—such as in wages, a ratification bonus, or a contribution to a health savings account. We could be losing four very valuable insurance-plan options, after several years of taking lower wage increases to maintain our benefits. Allina simply has not moved toward the nurses on this issue.

As a negotiator, it was difficult to hold back my opinion on what I felt we should do. But the nurses are well-versed on the issues and the tactics of this employer and voted a resounding “no.” Hearing the results, I felt relief. I’m inspired and awestruck at the strength of the Allina nurses.

Next, we need to keep mobilizing and strategize on how we can win a fair contract. This vote—by the way, the fourth “no” vote we’ve taken—sends a strong message that nurses are determined to stand up against this corporate powerhouse.

Already over the last several weeks we’ve been applying pressure to Allina’s board members and their businesses. Last week, for instance, I attended an action outside a General Mills shareholder meeting in Minneapolis. About 300 of us blocked the street and made some noise.

It was fantastic to see the commitment and the solidarity alive and well. We’re a force to be reckoned with, standing up for our patients and for all workers!

It’s true we’ve lost a month of wages by being on strike, and as of October 1 the company off cut our health care benefits. But we have gained so many other valuable experiences during these negotiations—incredible solidarity, amazing generosity from the public and other unions, engaged and active members, and the potential to gain better and safer contracts in the future.

Gail Olson is a negotiating committee member and a registered nurses at Unity Hospital.