Putting the Con in the Gig Economy 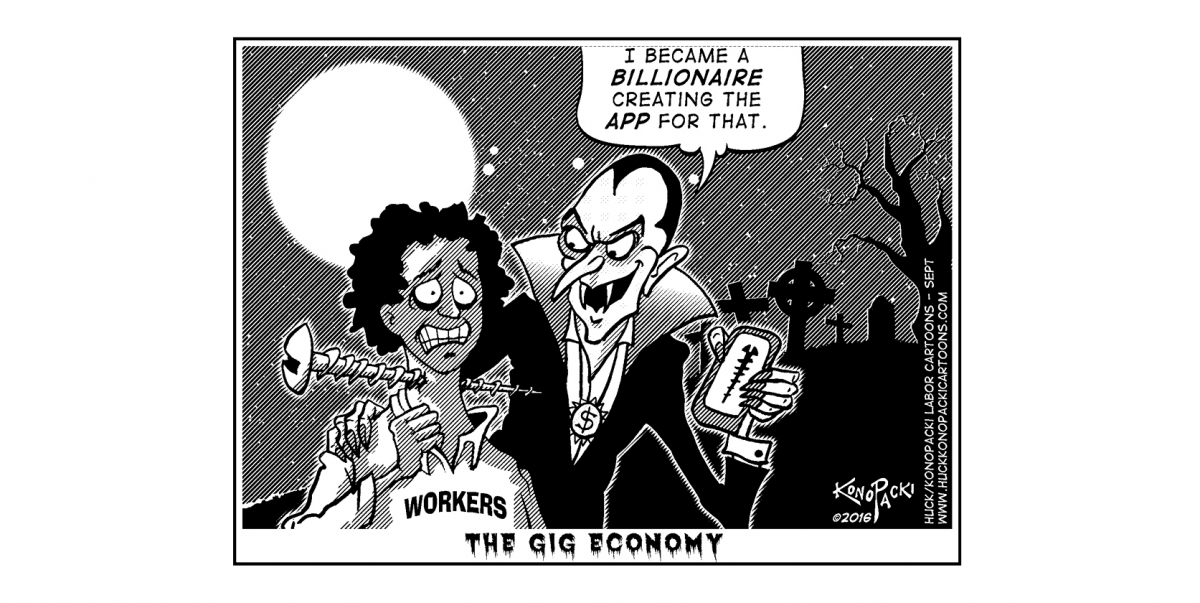 It looks like Uber is taking the Machinists union for a ride. Cartoon: Huck/Konopacki Labor Cartoons

Co-founded by Uber and the Machinists union, it's not a union, it has no collective bargaining rights, and it receives financial support from Uber.

Just how much support, we don’t know, since Uber and the Machinists won’t release their agreement—not even to drivers.

If the shroud of secrecy isn’t enough to raise your eyebrows, consider who’s heaping praise on this cozy new partnership. The Mackinac Center—a Koch-backed anti-union mouthpiece that pushed for “right to work” in Michigan—calls it a “model that could bring unionization into the 21st century.”

What will it do? The Guild gives drivers a process to appeal their terminations (which Uber calls “deactivations”). Ten union-selected drivers will attend monthly meetings of a “works council.”

“It’s an opportunity for drivers to sit across the table from Uber management and discuss issues related to pay, dispatch procedures, and paid time off,” said Jim Conigliaro, general counsel and business rep for Machinists District 15. “There are no obligations on either side to come to an agreement. It’s just a discussion.”

Bhairavi Desai has a more critical view. She heads the New York Taxi Workers Alliance, a worker center that represents 19,000 drivers in the city, including several thousand who drive for Uber.

Up until the 1980s, yellow taxis in New York City were dispatched via car radios. Drivers were considered employees, and many unionized.

Then two things happened. First, the radios came out; taxis switched to relying exclusively on street hails. And second, garages moved from a system of commissions—where cab companies took a cut of fares—to leases, where drivers paid to use the cabs and taxi licenses. Cabbies became independent contractors, and their unions were broken.

Without the right to unionize, the Taxi Workers have focused on local regulations, such as pushing to raise fares so drivers can earn a livable wage. They’ve also fought to reduce lease costs.

Now along comes Uber, with all the hallmarks of the employee system—it sets fares, controls dispatches, and takes a commission—yet it claims its drivers are independent contractors.

For the company, “it’s the best of both worlds,” Desai said.

This dodge allows Uber to weasel out of Social Security and Medicare taxes and to cheat drivers of legal guarantees to minimum wage, overtime protections, health insurance, workers’ compensation, and the right to organize and bargain collectively.

The truth is, Uber’s astronomical valuation of $68 billion shouldn’t be chalked up to its innovative app so much as to its success at skirting regulations and employment laws. If its drivers were reclassified as employees, Fortune estimated, the combined costs to Uber would top $4 billion a year.

An army of lobbyists and lawyers makes it all possible. Uber employs one-third more of these influence-peddlers than even Walmart does.

As part of the agreement, the Machinists dropped the issue of driver misclassification.

"We don’t comment on whether or not they are properly classified as independent contractors or employees," said Ryan Price, director of the Guild.

Before all this, the Taxi Workers and the Machinists were planning a joint campaign to organize Uber drivers in New York. “What we didn’t know was that, behind the scenes, they were engaging with Uber to sell everyone out,” Desai said.

Undeterred, the Taxi Workers are challenging Uber in multiple venues, pressing courts and regulators to rule the drivers employees. That would likely make the Guild illegal, as a “company-dominated labor organization.”

The Machinists call their deal with Uber “groundbreaking” and are trying to spread the model to Philadelphia. But it looks like Uber is taking the union for a ride—basking in positive press while maneuvering workers into meetings where they have no leverage or possibility of building power.

The Guild will never transform Uber’s business model. At best, such secret agreements and partnerships with management are doomed strategies.

At worst, a defanged union becomes a partner in exploitation.

This article has been updated to add the quote from Price and to make clear that the union has dropped the misclassification issue.

Chris Brooks is a staff writer and organizer with Labor Notes.chris@labornotes.org
Related
Texas Union Activists Fight 'Microtransit' Privatization »
Here's What's in the New Bill Jointly Backed by Uber and the Teamsters in Washington State »
Viewpoint: Gig Workers Deserve Real Labour Rights, Not Backroom Deals Like This One Between Uber and UFCW Canada »
Los Deliveristas Speak: How Delivery Workers Are Organizing to Take On the Apps »
BREAKING: Draft Legislation in New York Would Put Gig Workers into Toothless 'Unions' »