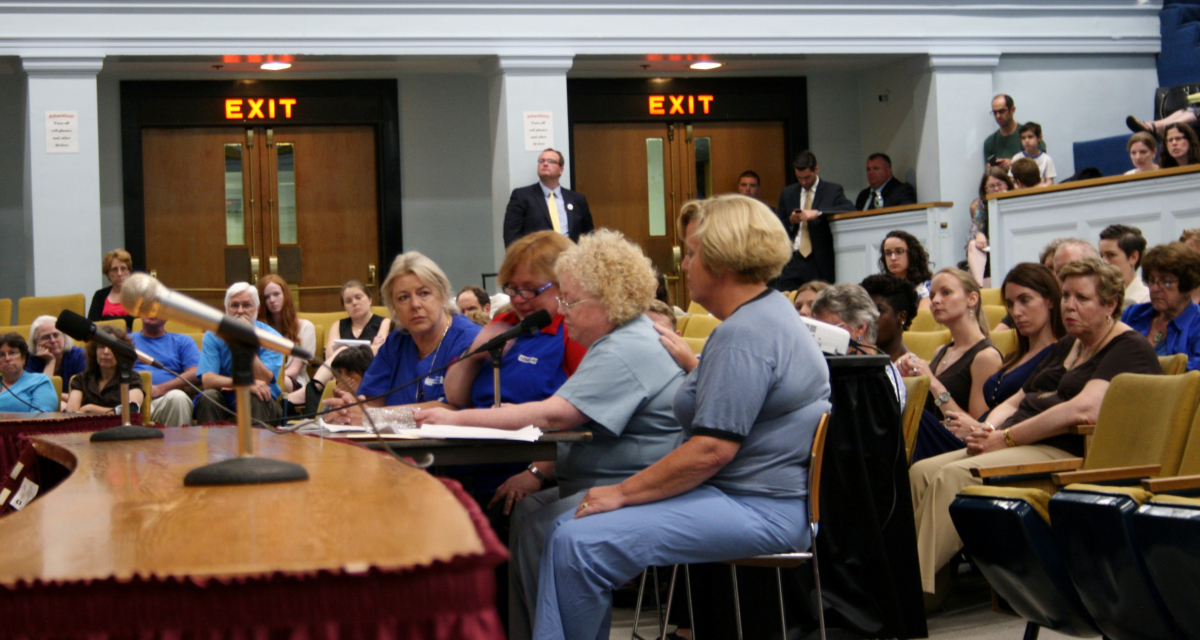 In a legislative hearing on a workplace violence bill last summer, Massachusetts nurse Trish Powers, from Brigham and Women’s Hospital, consoled colleague Elizabeth Dalton, testifying about an assault against her at the hospital. Photo: MNA.

For too long, health care workers have suffered from the assumption that workplace violence is just part of the job. But that’s finally changing—and union nurses are playing a key role in propelling the change forward.

Members of the Massachusetts Nurses are proud that their efforts were recently touted among the nation’s best practices. In a “Road Map” report on how to address violence in health care facilities, the Occupational Health and Safety Administration (OSHA) features contract language that MNA nurses negotiated at two Western Massachusetts hospitals.

OSHA credits “the joint efforts of labor and management” for the results—fewer and less severe patient assaults on health care workers.

Its report “Preventing Workplace Violence: A Road Map for Healthcare Facilities” draws examples from about a dozen organizations nationwide, including nursing homes, hospitals, and behavioral health facilities—varying in size, geographic setting, public or private ownership, and approach to the problem.

The process began almost 20 years ago, when violence was commonplace in certain areas of Providence Hospital in Holyoke. Patients often brought weapons into the hospital’s methadone clinic. Patients had been known to beat, spit on, cuss out, and even rape staff members. Nurses worked in constant fear that they might be attacked.

By the late ’90s, nurses at Providence had identified violence as a serious problem and begun working with MNA staff to address it. They began by surveying members about incidents they had witnessed, asking such questions as, “How did management respond?” “How could the event have been prevented?” and “What should have been part of the follow-up?”

“At this point it was important to find champions for the issue, nurses who could get others interested and primed for action,” said Evelyn Bain, a nurse and health-and-safety expert with MNA. “We were fortunate to have a number of strong advocates at Providence, including Mary Denise Glidden, an RN who served for more than 40 years at the hospital.” The union honored Glidden in 2007 for her work to improve health and safety.

Nurses at Mercy Medical Center in Springfield had also been struggling with violence at their facility, situated in a tough neighborhood. They were facing especially high rates of violence in the childbirth unit and the emergency department.

Nurses at Providence and Mercy at first introduced basic health and safety language into their bargaining agreements in 1998. The language was modest, but it was a starting point. The hospitals acknowledged their “responsibility to provide safe and clean building and grounds” for employees and agreed they would adhere to applicable state and federal laws.

In 2003, the union proposed more comprehensive contract language—including protections against workplace violence and for those with latex allergies—and many nurses stepped up to fight for it.
At both hospitals, the nurses fought for these improvements by documenting violence on hospital reporting forms, sharing their personal stories at MNA member meetings and bringing their data and stories to labor-management meetings, demanding that the hospital address their concerns.

After a nurse was assaulted in the parking lot at Mercy, nurses brought in an expert in tactical emergency services to train staff to protect themselves, which was paid for by the hospital.

“RNs from every department and every unit followed the progress closely,” said MNA Chief Negotiator Andrea Fox. “The result was an excellent contract with groundbreaking health and safety language.”

The new contract formalized Providence’s commitment to identify, intervene in, and follow up on all instances of workplace violence—including physical or verbal assaults coming from anyone at the hospital.

Here are a few of the contract provisions that were established to protect employees:

The task force also goes over OSHA logs, an important aspect of staying ahead of violence. These are public documents—mandated by federal law for most workplaces, not just hospitals—identifying all persons injured who receive workers compensation. The log includes such information as the title of the employee, the nature of the injury, when it happened, how it happened, how many days someone had to be out, and any work restrictions from the injury.

Nurses and other employees have the right to look at the logs; anyone can request them. The task force also finds out what unit an injured nurse works on, their date of hire and their shift. Fox and the violence task force committee reviews them regularly.

“That’s how we figure out trends, in workplace violence or more generally in health and safety,” she said. “Are people getting sick from the wrong wax being applied to floors? Are certain hospital units developing problems?

“The key is open conversations—and management being interested in having that conversation.”

In 2006, Providence nurses got the hospital to install metal detectors at two methadone clinics. During the first few days, the detectors identified a variety of weapons, including 31 knives and other potential weapons such as box cutters and screwdrivers. The security process quickly became routine, however—and weapons were seldom seen again.

OSHA’s report particularly highlights Providence’s success at reducing the use of physical restraints by improving de-escalation techniques. For instance, sensory rooms provide a soothing environment for patients with behavioral health problems. To prevent patients with dementia from wandering, geriatric chairs have built-in trays.

“Where some hospitals would limit their approach to medication, we use a more holistic approach,” said Cindy Chaplin, a psychiatric nurse and chair of Providence’s bargaining committee. “We work with patients as individuals, to find out what has a calming effect on them, and help them put that into practice. The result can be a positive change that lasts the rest of their lives.”

OSHA also details a full-scale active-shooter exercise conducted at Mercy Medical Center in early 2015, with drills on three scenarios. “The exercise was followed by an open and blame-free evaluation that identified opportunities for improvement,” OSHA reports.

All these changes have helped transform what was once a culture of fear into a culture of safety. It’s impossible to know how many assaults have been prevented, but “Providence and Mercy nurses—and all of the other employees, patients, and visitors at the hospitals—would likely have continued to see high levels of violence without the gains made through the collective bargaining process,” Fox said.

Over time, the improvements have shown up in Providence’s financial performance as well. Figures from the hospital’s risk management department show that workers’ compensation claims from violent episodes have fallen recently, from 64 claims costing $69,196 in 2011 to seven claims costing $735 in 2015.

Now the MNA is fighting to expand strengthen workplace violence protections for all health care employees, whether unionized or not. A union-backed bill, voted favorably out of committee this spring, largely mirrors the strides made through collective bargaining at Providence and Mercy.

The authors are nurses and members of the Providence Behavioral Hospital Violence Task Force Committee. If you are a registered nurse or other health care professional seeking better protection against workplace violence at your facility, contact the MNA at 1-800-882-2056.