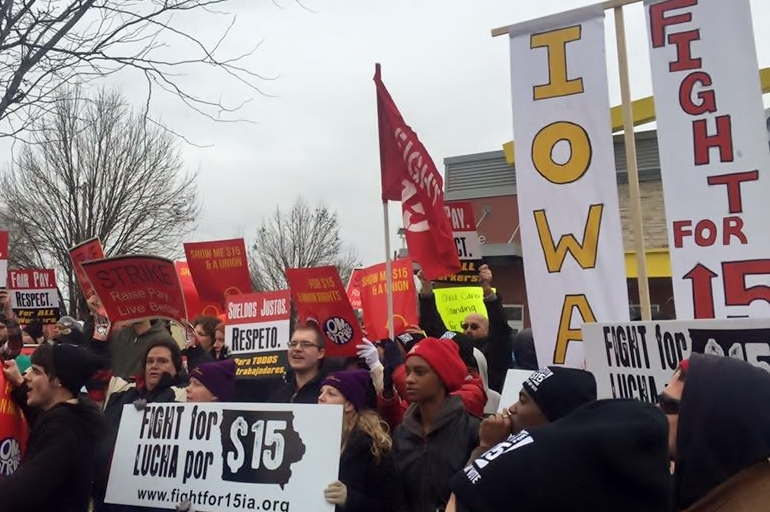 Des Moines fast food workers struck days before the caucus, hoping to use the news media's temporary obsession with Iowa to highlight the campaign for a $15 minimum wage. Photo: Stand Up KC.

When I think of Iowa, I think of open blue skies, friendly people, and cornfields as far as the eye can see.

Actually, I don’t often think of Iowa much at all—though it shares a border with Missouri, where I’ve lived since I was 10. It’s just the state I zip through to hop on I-80 en route to my hometown of Detroit.

What fails to come to mind when I think of Iowa is the word “rebellion.” Or anyway, it didn’t used to. But my impression changed forever last week as I marched with a thousand low-wage workers.

Iowa has gotten a lot of press lately as a presidential battleground. Ahead of the February 1 caucus, top contenders spent weeks traversing the state, courting voters. Republican candidate Donald Trump even got a tomato thrown at his head there—two, actually.

Days before the caucus, fast food workers staged a breakfast-time strike and rallied with supporters at a downtown Des Moines McDonald’s.

The Fight for 15 started in New York City three years ago with a demonstration by 100 fast food workers, backed by the Service Employees (SEIU). Since then it’s grown to include thousands of low-wage workers, from various sectors, in cities across the U.S.

But the movement didn’t include Des Moines—until now. Dozens went on strike January 28 for the first time in their lives. A thousand people marched through downtown Des Moines to the doorstep of the GOP debate. Photo: Stand Up KC.

So far, the protests have chalked up several city wins and one state win for $15—and made the federal minimum wage an issue in the presidential campaign. Democrat Bernie Sanders backs raising it to $15, Democrat Hillary Clinton wants $12, and the Republican frontrunners all want to stick to the current $7.25 (or worse).

Strikers hoped to use this moment, while news media were temporarily obsessed with Iowa, to draw more attention to the issue.

“We’re going to support the candidate that supports us,” Wendy’s worker Wiley King told the Des Moines Register. “We are the people and we deserve the American Dream.”

I actually worked at a Wendy’s in Kansas City for two years, back in the mid-’90s. The wages now are hardly better than they were then.

“Companies like McDonald’s and presidential candidates alike need to know that we are not going away,” King said. “With 48 percent of Iowans getting paid less than $15 an hour today, we have no choice but to speak out.”

And speak out they did. A downtown square called Cowley Commons became the gathering point for nearly 1,000 people, including fast food, child care, and retail workers.

A GLIMPSE INSIDE THE DEBATE HALL I came straight over from the convention center where the big GOP debate was scheduled that night. After being denied press credentials, I had registered as a volunteer.

I just wanted to feel what it was like to be around so many Republicans; I thought it would be fun. I made it through the Secret Service checkpoint. Nobody questioned me or gave me any untoward looks.

After waiting in line with my fellow volunteers for bright red “Debate Assistance” T-shirts, laminated credentials, and collector lanyards, I looked great and felt even better. We were taken to a big room and seated in rows.

“This is so exciting,” said the young Republican sitting next to me.

He told me his life story. He was 19 years old, from a small town in Montana, population 2,000. His family was in the ranching business, and he had come to the “big city” of Des Moines to study agricultural law.

I asked what he thought of the armed occupation of a wildlife refuge in Oregon, big in the news lately. “I’m really happy about it,” he told me. “It’s about time we stand up for our rights.”

I told him I totally got it. But the only thing I really got was that what might be the biggest demonstration for workers’ rights Des Moines had ever seen was just 30 minutes away. I stood up as they were giving out assignments.

“Hey, where are you going?” he whispered, as I zipped up my jacket to cover my red shirt. “I’m actually a democratic socialist,” I whispered back, “and I’m headed to the Fight for $15 protest.”

‘COME GET OUR VOTE’

The first person I saw when I got to Cowley Commons was Dawn Lane, my fellow Ford worker from Kansas City Assembly and member of Auto Workers Local 249.

“I’m here to support other workers having the opportunity to be in a union,” Lane told me. She had come in a bus from Stand Up KC, the group coordinating fast food and retail organizing in Kansas City.

At the strikes earlier that day, Lane had met supporters who drove in from Minnesota and Oklahoma—and Iowans who said this was the first time in their lives they’d participated in something like this.

A little girl in a faux-fur hoody and a Fight for 15 shirt, holding a yellow balloon, tooted her pink-and-purple plastic trumpet.

A group of women in “Child Care Workers for $15 and a Union” T-shirts formed a choir around a cantor beating on the underside of a five-gallon plastic bucket: “I...believe...that we...will win!”

I asked Lane to estimate how many people were here today. Her eyes got big. “A lot!” Within a half-hour, the entire square was filled with workers lining up to march toward the Republicans.

Peaceful but boisterous, we took over the streets, chanting our message: “Come get our vote.”

People just getting off work greeted us with smiles. Iowans working out on treadmills waved through the glass. One woman raised her fist in the air and laughed.

The convention center was completely blocked off. The steps leading up to it became a stage.

Angelica Serrano, who has worked at a Des Moines McDonald’s for 17 years, was born in Guanajuato, Mexico. The 45-year-old mother of three makes $9.90 an hour.

“2016 is not just the first time I’m going on strike,” she said. “It’s also an election year, and for the first time I feel like my voice matters. Since moving to the U.S., I’ve felt so invisible that I never bothered to vote in any election. Politicians didn’t talk about things that mattered to me…

“Not this year. For the first time, I’m going to the polls to support candidates who stand with workers fighting for $15 per hour and union rights.”

Shortly before the rally finished, I left to try to make a Trump event that I had gotten free tickets to, thanks to my red-headed Republican friend.

But the line was around the block. And to hell with them anyway. My people had said what they had to say.