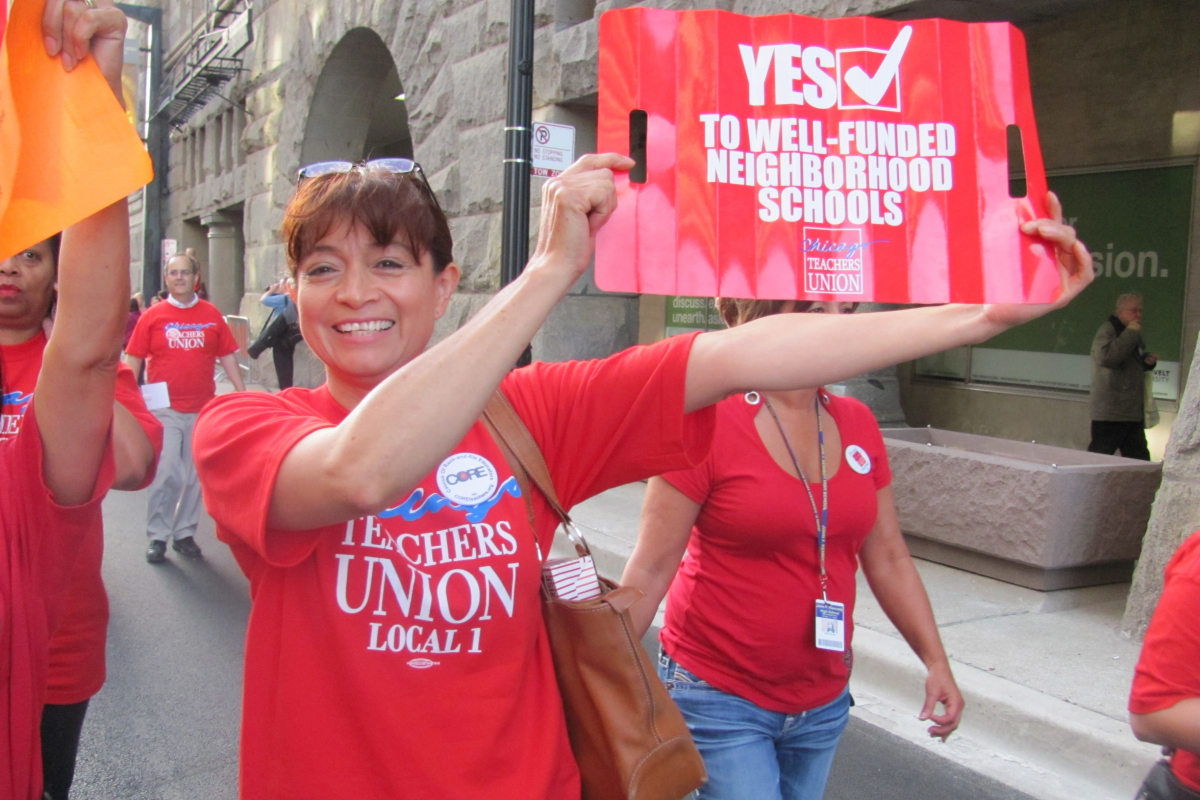 Despite the impulse to self-sacrifice, the best thing teachers can do is stand up for themselves—and their students—against the corporate cost-cutting mindset. Photo: Chicago Teachers Union.

In one school district this fall, unionized teachers and other employees voted to work for free.

No doubt they faced an impossible choice. The superintendent had told them school couldn’t open otherwise. Because of the district’s and state’s failure, students would be denied an education.

But the Chester, Pennsylvania, case is a troubling example of how school employees are bullied into making personal sacrifices “for the kids.”

Despite the rhetoric about summers off and lavish pensions, the truth is that teachers regularly dip into their personal finances and time. Years of funding cuts have forced them to do more with less. On top of working before and after the bell rings, the average teacher spends $500 a year on school supplies.

Things only got worse after the economic crisis of 2008, as pundits and politicians blamed budget woes on public employees. Many unions offered concessions, hoping to repair their image.

Some concessions were perhaps unavoidable, in cities and states that were really in hot water. But often the cuts were sheer opportunism. Politicians seized the chance to slash pay and benefits permanently—while refusing to raise revenue.

Chicago teachers have inspired workers around the country by refusing to play by these rules.

The school board has repeatedly tried to blackmail them: give up your raise or we’ll cut school buses; hand over your pension or we’ll slash special education. The union argues the district is “broke on purpose,” and concessions won’t solve the problem.

MADE TO FEEL SELFISH

Teachers aren’t alone. Health care workers, too, routinely feel pressure to skip breaks and work off the clock—even at the risk of losing their licenses and jobs.

Employers chronically understaff, taking advantage of workers’ compassion for patients. In some states they can legally force nurses to work 24 hours straight. A nurse who refuses may be charged with patient abandonment.

It’s no coincidence that the demands for self-sacrifice are most acute in professions like teaching and nursing—jobs commonly held by women.

We’re made to feel selfish when we advocate for our own pay, benefits, breaks, or time off. These are among the reasons why teachers and nurses unionized in the first place.

News stories about the Chester teachers’ sacrifice buried the punchline: the reason for the budget shortfall.

Money was being diverted to the growing charter school industry, which now enrolls half the district’s students. While public schools starved, charters raked in $64 million a year in district funds.

Teachers didn’t cause that problem—and teacher sacrifice won’t solve it.

As striking teachers in Chicago and elsewhere have proven, the best thing teachers can do is stand up for themselves—and their students—against the corporate cost-cutting mindset that now pervades the public sector.

Workers are natural advocates for the services they provide. Labor Notes celebrates unions that are fighting to expand services to meet community needs.

But thinking beyond the narrow “bread-and-butter” unionism of the past doesn’t mean unions should neglect pay and benefits. It’s not either/or.

Unions have to keep pushing against the impulse to self-sacrifice. We can make a case that good pay, staffing, and benefits are not only deserved, but an essential part of what it means to invest in public services.

It’s our job to point the finger at the real sources of funding shortages—privatization and tax cuts for the rich—and show that demanding more is better than working for less.