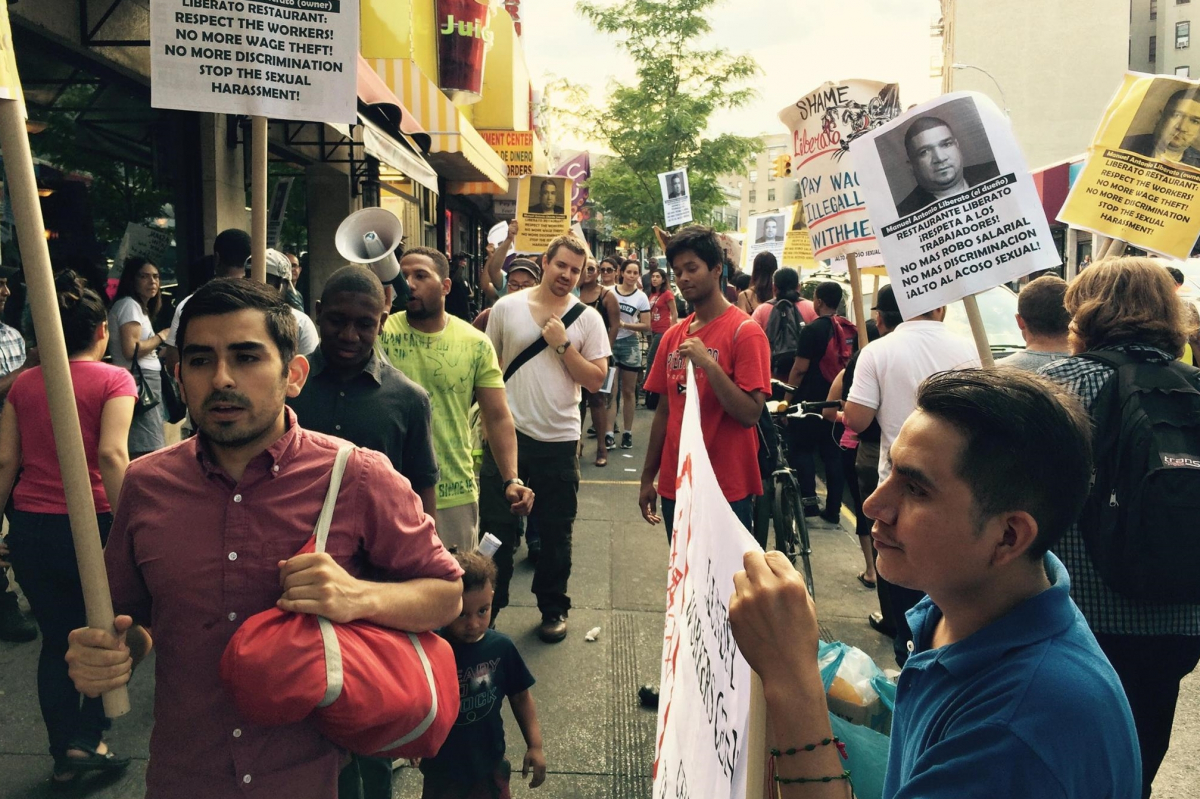 The documentary “The Hand That Feeds” takes us on an exhilarating organizing journey as workers fight for a union at deli on Manhattan's Upper East Side. Photo: Laundry Workers Center.

“We’re willing to lose everything, but we won’t give in,” says Mahoma López, a deli worker we watch transform into a powerful leader in the new documentary “The Hand That Feeds.”

As López and his co-workers fight for a union at a Hot and Crusty deli on Manhattan’s Upper East Side, the film takes us along on their exhilarating organizing journey.

Hot and Crusty is a chain of 24-hour delis with locations throughout Manhattan. The delis are run by franchisees, but with the financial backing of common investors.

The workers—mainly undocumented immigrants—make less than minimum wage and get no overtime pay. At the start of the film, a worker shows the $290 he’s been paid for a 60-hour week, less than $5 an hour. In another scene, workers point out the meat slicer that’s never been fixed.

Whenever they raise concerns, managers threaten to fire them or call Immigration. But with help from the New York-based Laundry Workers Center, the workers file a wage theft lawsuit.

They deliver a letter with their demands, start leafleting customers, and—after they launch a union drive—even win some back pay. But to have any real power, they realize they’ll need to keep pushing for a union.

Management refuses to negotiate. “They said, ‘How can we give you benefits if you’re not a union?’ explains Gonzalo Jiménez, another Hot and Crusty leader.

And so begins their dramatic fight for an independent union and a first contract, in a sector where successful drives are rare.

The rate of unionization in food services and drinking industries, according to the National Employment Law Project, is a miniscule 1.7 percent. Meanwhile 91.6 percent of frontline workers earn less than $15.

Despite management’s aggressive union-busting tactics, the Hot and Crusty workers win their union vote with a clear majority. But it’s only the first step in a long campaign.

A few weeks later, the deli owners settle the unpaid wage claim—but announce the business is shutting down.

So the workers ramp up the pressure. With support from Occupy Wall Street protestors, on the day the restaurant is supposed to close, they organize a spirited one-day occupation. Then they set up an ongoing picket outside, vowing not to leave until they’re back to work.

On the sidewalk, the picketers set up a Worker Justice Cafe to serve free bagels, donuts, and coffee to their old customers, many of whom stop by to express their support.

The days pass. We watch the workers struggle to keep up morale. Some are forced to find other jobs.

Workers have to convince their families that the sacrifices are worth it. The film shows how López’s wife, a deeply religious Pentecostal, is initially skeptical of her husband’s involvement in the organizing.

Eventually a new investor agrees to purchase the deli and promises to recognize the union. But the deal he wants the workers to sign is a step backwards.

Rather than back down, workers continue to turn out community support. In the end, they win a first contract with just cause, sick days, and union control of the hiring process—preventing management from stacking the small workplace with union opponents.

“The Hand That Feeds” explores what it takes to build power in low-wage industries.

When the workers vote to unionize, a law student helping them out says, “You can never have more power than that, as a worker in this country—he has to negotiate with you.”

But in this small workplace just as in larger ones, the film shows, winning an election isn’t enough to get a first contract. Workers must develop many other points of leverage.

The Hot and Crusty workers find theirs in a brand name the employer wants to protect, and a business rooted in a specific neighborhood. The film is a primer on how to build an intensifying campaign with many creative tactics.

Critically, it shows workers challenging wage theft and abuses while they’re still on the job. In fact, many profiled in the film work at the deli to this day.

In my 12-year experience at a workers center, workers mainly came forward with complaints of unpaid wages only after they’d left their jobs. This made it tough to try the kinds of strategies profiled in the film.

“The Hand That Feeds” also shows the tensions in building unlikely alliances. The Occupy Wall Street activists are in a position to take greater risks, but also, they’re used to calling the shots. One of the Laundry Workers Center’s young organizers has to lay down the rules —we take our lead from the workers.

In the end, though, the alliance works—and gives the Occupiers a lesson in what ongoing solidarity looks like.

“Spectacles are easy,” muses one. “They’re shows, and when the show’s over everyone goes home. And this is different.”

For the Laundry Workers Center, solidarity is still very much needed.

The Hot and Crusty workers’ contract expires this fall. And building on the organizing there, last year the same workers center began a new organizing drive at a Bronx restaurant called Liberato.

Workers at Liberato say the owner is violating a raft of labor laws, including minimum wage protections, against the mainly immigrant employees.

Deploying a time-honored anti-union tactic, Liberato has filed a racketeering lawsuit charging the worker center with extortion. The Laundry Workers Center is organizing regular pickets to keep up the pressure.

Regardless of whether the Hot and Crusty win can be replicated in other New York restaurants, “The Hand That Feeds” captures the adrenaline, uncertainties, and joys of an organizing campaign. It shows what a small group of workers—armed with innovative strategies and a clear vision of how to build power—can pull off.

Reflecting on his Hot and Crusty experiences, López says “in organizing, you realize that changes in society are made by movements.” Watch this film if you need a reminder of this powerful truth.

Visit thehandthatfeedsfilm.com to organize a screening for your union or community. Universities, libraries, and other educational institutions can purchase "The Hand That Feeds" from Bullfrog Films. Read more about workers’ organizing at Liberato at lwcu.org.