Small Victory for Independent Politics in Chicago, as Rahm Prevails 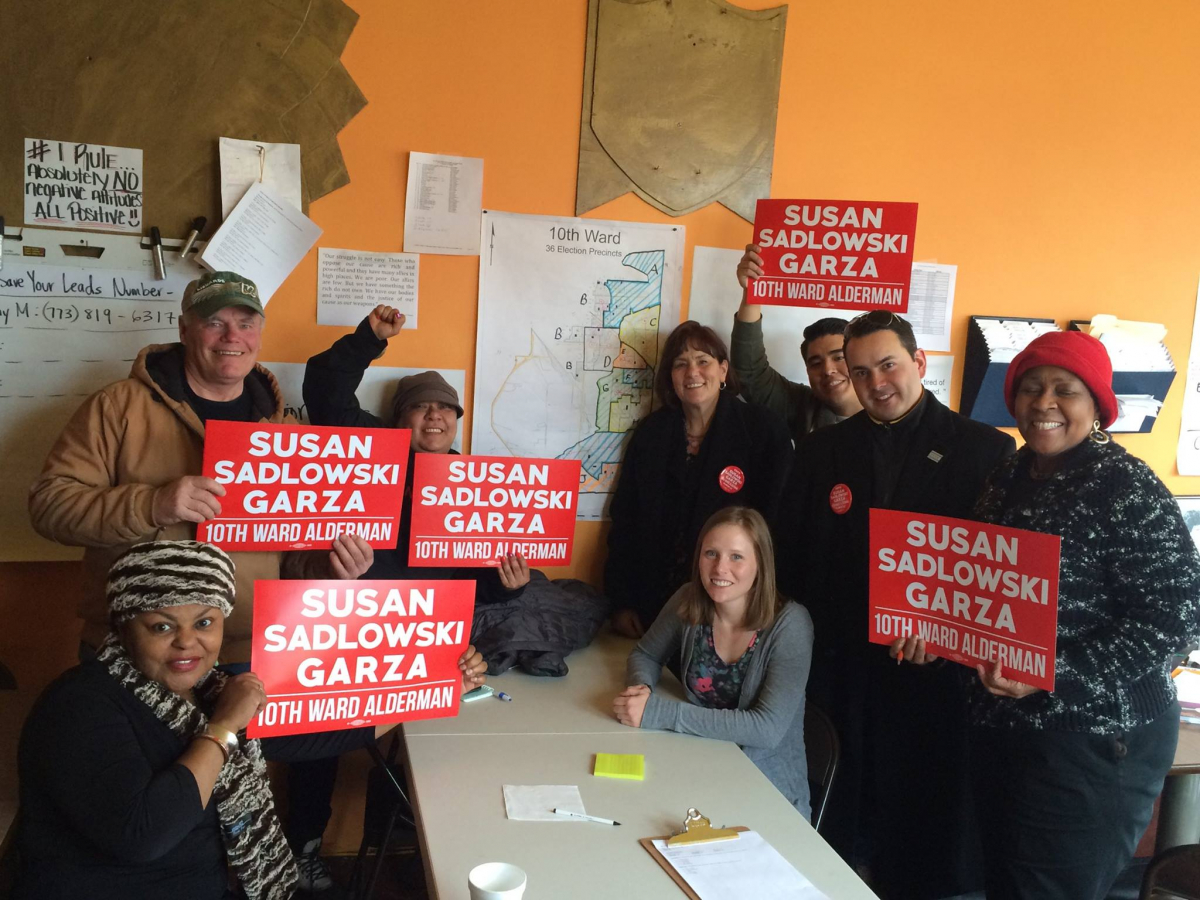 Chicago teachers now have one of their own on the city council. Susan Sadlowski Garza, school counselor and Chicago Teachers Union executive board member, declared victory this week over incumbent John Pope. Absentee ballots are still being counted, but signs indicate she will squeeze past by less than 100 votes.

While the CTU-led campaign to oust Mayor Rahm Emanuel fell short, Garza’s victory is a boost for the council’s progressive caucus, which before the election included 7 members out of 50. Depending on the outcome of absentee ballot counts in several close races, the progressive caucus could increase to 12.

Garza was the lone CTU member to win election—a total of five were on the February ballot and two made it to a runoff. CTU member Tara Stamps lost in the runoff to Emma Mitts, another Emanuel ally known for bringing Chicago’s first Walmart store to her ward. Walmart rewarded Mitts with a $1,500 donation last month.

Garza’s win in her Southeast Side district relied on grassroots volunteers and her family’s roots in the community. Her father Ed Sadlowski was a longtime reform leader in the Steelworkers. On Election Day, Garza had 250 volunteers getting out the vote in her ward.

The 10th Ward runs along Chicago’s southern lakefront, where steel mills were once the main employers. Community groups complain of toxins and hazards from nearby industry. In her campaign Garza committed to booting the polluters out of the area. One of the main culprits, animal feed producer Agri-Fine, was a major Pope contributor.

On education, Garza stressed that Emanuel’s education cuts affect everyone in Chicago, not just teachers or public sector workers, because students suffer—for instance, from not having enough counselors.

United Working Families also backed Jesus “Chuy” Garcia’s campaign for mayor, as did the city’s largest transit union and SEIU’s state council. Garcia made it to a run-off with Emanuel—the first run-off in Chicago's machine-dominated history—but ultimately lost, 44 to 55 percent.

Emanuel’s fundraising strength allowed him to flood the airwaves with campaign ads. Garcia built support after the runoff and did particularly well in Latino neighborhoods, but ultimately could not compete with Emanuel on visibility.

Still, in her ward, Garza said, the mayor is unpopular among everyday Chicagoans. “Every single union member I’ve spoken to, whether it’s a laborer, a steelworker, or an auto worker,” she said, “everyone is showing interest in being part of United Working Families.”

For teachers and their supporters who took on the mayor in 2012’s week-long strike, United Working Families represented the logical next step.

Despite deep public support for teachers, strong organization at the school level, and their ability to mobilize on a massive scale, CTU members found that the mayor and the machine-controlled city council have sway over their workplace: the public schools.

Specifically, CTU has been limited by the city’s Tax Increment Financing policy, which diverts a big chunk of property taxes to subsidies to developers rather than to schools, and by the mayor’s ability to appoint the school board and fund charter schools at the expense of existing public schools.

While Garza supporters celebrate her upset in one part of the city, Chicago teachers and United Working Families are strategizing about how to deal with four more years of “Mayor 1%” and his majority on the council.

“We certainly want to break from the politics of austerity,” said CTU organizer Brandon Johnson. “We want a break from the disinvestment. Whenever you have incumbents that vote 100 percent of the time with the mayor of Chicago and his corporate-interest agenda, there is clearly a need to have a more independent voice.”

On the immediate horizon is CTU’s fight for a new contract. The current one expires in June. After being bested by CTU in the 2012 contract battle, Emanuel is no doubt eager to inflict a loss on his most visible political enemy.

An open question is whether the energy generated by the electoral battle will translate into a lasting progressive political organization independent of the Democratic machine. Garza’s win provides at least one ray of hope.

For more on struggles in Chicago, check out Labor Notes' latest book, How to Jump-Start Your Union: Lessons from the Chicago Teachers.

Related
As Omicron Rages, Teachers and Students Fight for Safety Measures in Chicago and Elsewhere »
Chicago Passes Union-Backed Bill for Civilian Oversight of Violent Cops »
Despite Slow Vaccine Rollout, Teachers Are Being Pushed Back Inside »
Chicago Teachers Are Voting on Whether to Defy Monday's Reopening Order »
Educators Demand Virtual Schools as 'Least Bad' but Safe Option »