Brink's Armored Car Workers Join Fight for 15 and a Union 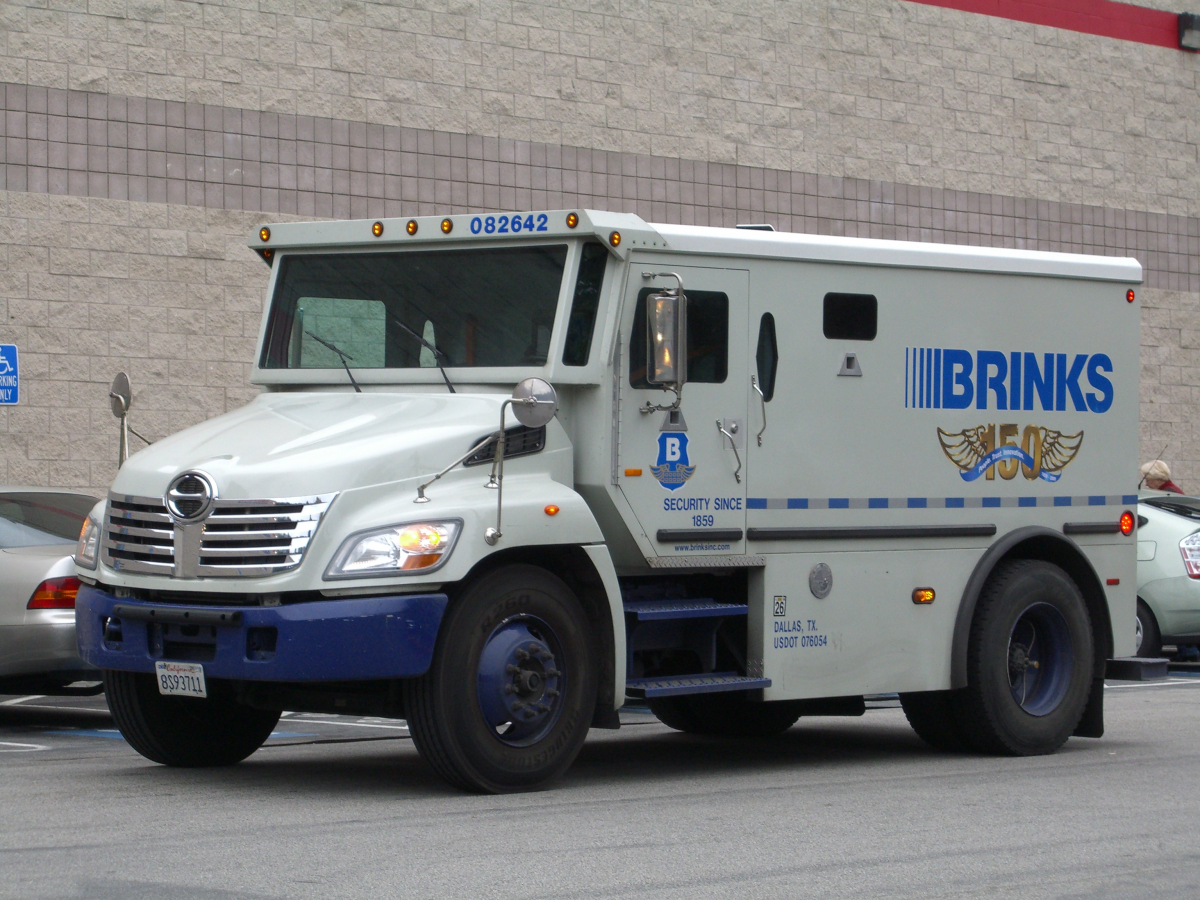 Fifty Brink’s armored truck drivers and messengers walked off the job in Chicago on April 15. Among their grievances: low wages, no overtime pay, trucks with no air conditioning, and cuts to retirement benefits. Photo: Michelle Ress, CC by NC, 2.0.

At Chicago’s latest Fight for 15 rally, one group of strikers stood out in the crowd: Brink’s armored truck drivers and messengers in full uniform, complete with gun belts and bulletproof vests.

Fifty spontaneously walked off the job April 15 at the beginning of their 5 a.m. shift—inspired by the national day of action, and with a long list of grievances (see video here).

One sticking point is atrocious conditions in the bulletproof vehicles. The trucks, many of them 20-25 years old, frequently lack heat or air conditioning—a serious issue, given that when in operation, they’re sealed shut.

Another safety concern is that, while the driver stays behind in the truck, messengers must go out by themselves to pick up or deliver cash, jewelry, and other valuables. The messengers want to work in twos, as they used to do before most unions were driven out of the industry a generation ago.

Over the past 18 months, Brink’s has imposed a raft of harsh economic takeaways. A big one: it no longer pays overtime for work in excess of 45 hours a week—in a business where 12-hour days and six-day weeks are the norm.

Brink’s dodges overtime by taking advantage of the Motor Carrier Exemption to the Fair Labor Standards Act. Some workers say they’ve lost over $10,000 as a result.

In March, one driver at another armored truck company, Eastern Armored Services, won a lawsuit ruling she is owed overtime under a 2008 Congressional amendment to the exemption. The amendment says that drivers who spend part of their time on vehicles under 10,000 pounds qualify for FLSA overtime protection for all time worked. But Brink's trucks appear to weigh more.

Brink’s also froze two yearly increases that workers had been counting on: 15 cents an hour on an employee’s anniversary date, and 35 cents across the board. Employer contributions to 401k retirement funds were also cut, and earned vacation hours taken away.

Drivers and messengers start around $13.25 an hour. Those with years of seniority make more, but now that all raises are frozen, newer workers doubt they ever will.

Meanwhile, these workers put their lives on the line to protect millions in cash and valuables for a multinational company whose 2013 revenue was $3.9 billion. They transport millions of dollars to and from Bank of America, Chase Bank, McDonald’s, Burger King, and Walmart.

“When we ask, ‘When are we going to get a raise?’ they say the economy is bad. And we told them, you guys must not watch the news, or you think that we are all idiots.”

One company executive sent to the facility from Texas, workers claim, drove up in a luxury car. “A Maserati! When you say things are going bad for this company you would send somebody in a Maserati?”

As news spread of the self-organized walkout, Fight for 15 supporters hurried to the Brink's facility, in an off-the-beaten-track industrial district, to invite the strikers to join a rally at a nearby McDonald’s. They did, and that evening they joined the citywide rally and march.

The one-day strike held solid. Brink’s called on its main competitor, Garda Security, to transport its customers’ cash for the day. But the president of the United Armored Transporters of America (UATA, founded in 2011 to represent drivers and messengers at Garda’s facility in Broadview, Illinois) joined the pickets and turned away Garda trucks.

In the end, Brink’s was only able to service three or four of its 35 routes that day.

To protect the strikers protection from retaliation, Service Employees Local 1 offered them legal representation. The local represents 10,000 janitors and building guards, as well as some plant guards.

Before daylight the following morning, strikers walked back into the Brink’s facility with 30 SEIU staff and community supporters, led by an attorney and an officer of the local.

At the time of writing, the employer has been notified that the union is seeking recognition.

Security guards, whether armed or unarmed, are denied the same rights as other workers under U.S. law. The 1947 Taft-Hartley Act prohibits unions that represent non-guard employees from also representing anyone defined as a guard.

Historically, the point of this provision was to keep in-plant security forces separated from the rest of a factory workforce. Factory owners hoped it would prevent the kind of occupations and sit-down strikes that had built unions in the 1930s.

But the “guard” category soon grew to include such diverse types of workers as janitors who keep an eye on building security and even some technicians who repair building alarms. A 1953 ruling lumped in armored car drivers as guards, too.

Today, the only way that a union representing non-guard employees can represent guards—even at an entirely different company—is by voluntary consent of the employer. The National Labor Relations Board will not conduct a certification election for such a union, and will not enforce its right to bargain.

In other industries, an employer’s refusal to bargain is an unfair labor practice. If workers call a strike in response, they cannot legally be permanently replaced. But if, upon the expiration of a collective bargaining agreement, an employer decides to withdraw voluntary recognition from a guard unit that is part of a union that also contains non-guards, workers are left with no legal protection.

For decades guard unions were strong enough to enforce their collective bargaining agreements without a legal framework. But in the late 1970s and early 1980s, Brink’s launched a wave of decertifications.

Following Brink’s lead, Wells Fargo Armored Service pushed Northern California workers out on strike by demanding a 20 percent pay cut. After more than 30 years of bargaining with a Teamster local, it withdrew its voluntary recognition of the union. In the landmark Wells Fargo case the NLRB ruled for the company, and courts eventually upheld the decision. The workers were left with no legal recourse and no union.

Taft-Hartley, as interpreted by the NLRB, also prohibits established unions from assisting guard-only units in any way, financial or otherwise. It even prevents union staff from volunteering their time to help rebuild these mangled guard-only locals.

This legal situation presents a quandary for the Brink’s armored truck drivers. If they choose the evident power and resources of SEIU Local 1, they will have to force the giant multinational to the bargaining table without going through the NLRB. They’ll likely rely more on corporate campaigning to pressure the company—and have to repeat this tactic every time the contract expires.

Their other options are to join a small independent union, like the UATA, which already represents drivers doing the same job at Brink’s major competitor in the Chicago area, or one of the other small guard unions that operate nationally.

As a guard-only union, the UATA can avail itself of NLRB protections to enforce the employer's duty to bargain and defend workers from being harassed or terminated for union activity. But it cannot match the resources of SEIU. And regardless, they are still likely to need a comprehensive campaign to win a strong first contract from Brink’s.

When they got back to work after the strike, workers reported they were soon called into a meeting with an out-of-town H.R. representative who said, “We need to work on getting our customers back,” and asked each individual to explain their grievances.

A few days later, management threw an early-morning party with balloons, donuts, coffee, and signs reading “We Are Family.”

“This is like my family,” one worker remarked: “My dad used to steal my allowance.”

Steve Edwards recently retired as president of AFSCME Local 2858 and has worked on numerous organizing and electoral campaigns. He served on AFSCME Council 31's State of Illinois Contract bargaining team as well as the statewide grievance committee for his employing agency.