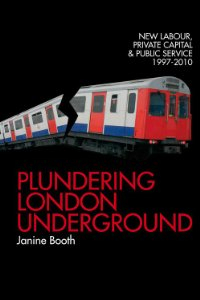 In the early 1980s, New York City’s and London’s subway systems were both on the brink of collapse. Woefully inadequate funding for aging equipment and infrastructure was producing frequent fires, derailments, and failures of signaling systems.

To bring them back from the brink, the powers that be in both cities realized massive investment was needed. But where was the money to come from? They rejected the idea that national, state, or local taxes should provide it.

Borrowing was one alternative. New York’s Metropolitan Transportation Authority in the mid-1980s began issuing bonds worth billions of dollars; funds from the fare box were committed to repay them. Thirty years later, the MTA projects 41 percent of fares next year will go to debt service. That’s money that is not available to expand service or settle fair contracts.

London went a different route, choosing in the 1990s to privatize parts of the London Underground in what was known as the Public-Private Partnership (PPP). The public sector still operated the trains, but responsibility for maintaining and modernizing much of the infrastructure was turned over to private companies. According to the plan’s proponents, private companies would do the work so much more “efficiently” that over time they would make a profit from the fees they received for managing their part of the system.

The PPP was supposed to continue for 30 years; it lasted just seven. A new book by Janine Booth, Plundering London Underground, tells its story in great detail. It is a story that anyone concerned about attacks on the public sector, or efforts to privatize public services, should know.

Decisions about how to pay (that is, who will pay) for transportation, and who will run it, are political decisions.

As you can probably guess from the title, Booth has a clear point of view. She is a station supervisor in London and has been an officer of the Rail, Maritime and Transport union, the primary industrial union representing workers of London Underground. She was part of the RMT’s fight against the PPP.

But Booth does not present only the point of view of the PPP’s opponents. She had remarkable access to senior managers involved in developing and implementing it. They spoke with her about what was going on on their side of the barricades—sometimes defending, and sometimes criticizing, the process and the outcome.

The drive to privatize the Underground started with Margaret Thatcher’s Conservative Party. But it was Tony Blair’s Labour Party, so-called “New Labour,” that carried out the PPP, pushing it through over the objection of unions and local party branches when it should have been fighting for adequate public funding to maintain and rebuild the system

This shows that Labour had ceased to be a working-class party, Booth argues. As a further illustration she shows how, when it came time to negotiate contracts for the services the private companies would provide, the rules kept changing to favor the companies by raising their fees and lowering their liabilities.

Rebuilding the New York and London subways has cost billions of dollars in public funds. In the process, hundreds of millions found their way into the pockets of private companies, banks, and investors.

In the end, despite the favorable terms, splitting the operation of the trains from the maintenance of the infrastructure created massive inefficiencies. The hundreds of millions of pounds that went to the private companies did not yield safer trains or enhanced service. And the lack of short-term profits bankrupted some of the private companies.

Between 2007 and 2010, most of the work that had been contracted out with such fanfare was returned to the public sector.

If borrowing (New York) and PPP (London) aren’t the right ways to finance the expense of maintaining and modernizing public transportation, what’s the alternative?

Plundering London Underground concludes with a chapter called “A Socialist Alternative.” Here, Booth presents the outlines for a transportation policy that would serve subway and bus workers and riders—not bankers or the heads of construction companies. In the U.S., where the word “socialist” raises red flags (pun intended), these same proposals would fit nicely in a chapter called “A Democratic Alternative” or “Toward a Truly Public Transportation System.”

Booth’s alternative is based on a few core principles:

Booth has written an important and unusual book. Her job as a critic of PPP was made easier by the fact that it failed so completely. But the book’s value lies not in her descriptions of the many ways PPP failed, but in her explanation of why it had to fail—and where we should look for an alternative public transportation policy, one that will be truly “public.”

Related
Bay Area Transit Unions Join Forces to Win Safety Protections and Beat Back Layoffs »
Viewpoint: Don’t Count on New York Unions to Stop the Cuts »
Interview: “We Are Fighting for Our Lives Against People with Money and Power” »
Another Look at the VA, in the Midst of a Pandemic »
Viewpoint: How to Save Transit Workers’ Lives »