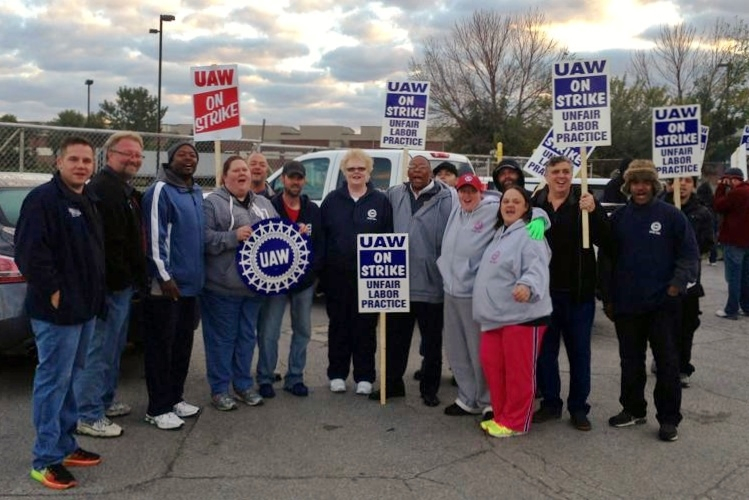 Unfortunately, it turns out the devil is in the details.

Their contract expired August 4, but United Auto Workers Local 2335 negotiators stayed at the bargaining table six more weeks. They were trying to work out an agreement that would recognize the sacrifice workers had made to bring the company from the brink of bankruptcy to a 2013 profit of $839 million. The hated two-tier wage and benefit structure was introduced in the 2010 contract, along with wage stagnation for higher-seniority workers.

Word got around on September 12 that the local would be striking Lear at 6 a.m. the next day, if no agreement was reached by then.

So at 6 a.m. September 13, the second shift got off work and went to the staging area, an abandoned grocery store parking lot half a block away, to get their strike signs. Third shift went into the plant to be told they were on strike. Second shift anxiously watched the doors for a sign that their sisters and brothers from third shift were ready to join them.

Then the cry went up: “They’re coming out!” Workers came out, got into their cars, and went over to the staging area. Except for a few managers’ cars, the Lear parking lot was empty.

Management came out and chained the gates shut. Strike captains led a group of picketers to the truck entrance to watch for activity moving in or out of the plant’s only unlocked gate.

The rank-and-file group Autoworker Caravan is holding a speak-out “to develop a campaign to make sure multi-tiers are really eliminated in the Detroit 3 contract negotiation in September 2015.”

UAW Local 551 members, who work at the Ford Assembly Plant in Chicago, had followed the events in Hammond closely. In August we were preparing a solidarity rally on the theme “End Two Tier, Start with Lear!” but we were asked to wait. Still, the preparations made our members more aware of what was unfolding at the plant that supplies the seats for our product.

So Local 551 members were ready also. Several of us joined Local 2335 members at the gates right away. Some brought children to the picket line so they would learn that good jobs are worth fighting for.

Workers from the Ford Chicago Stamping Plant, Local 588, and a nearby supplier park that also supplies parts for Chicago Assembly Plant were on hand as well. Local 3212 workers at Tower, Dakota, and ZF Industries also came out.

Teamsters Local 142 hauls Lear seats from the plant on 165th Street to the assembly plant. Their support of the strike assured no large shipments would get through. Meanwhile at the assembly plant, Plant Chairman Coby Millender tasked UAW quality reps and health and safety reps with watching the docks to see to it that no clandestine shipments arrived.

Production at Chicago Assembly Plant was halted around 11:30 a.m. Chassis and Trim employees were sent home early, while Paint, Body, and Pre-Delivery tightened up the lines.

After setting up a strategy for the inevitable parts shortage, Local 551’s entire bargaining team came over to Lear for a show of support. We sent out a Facebook blast asking members to volunteer for three-hour shifts of picket line assistance. Around 110 members of Local 551 came out to support the strike, many pulling multiple shifts. One became a strike camper, staying for over 24 hours.

And a delegation of five Lear workers from UAW Local 3055 in Columbia City, Indiana, including President Jody Grabner, drove out to support their sisters and brothers in Hammond. Those workers make seats for GM’s Fort Wayne Assembly Plant. Their contract expires in October 2015, right after the Detroit Big 3 contracts expire.

On the picket line before the sun came up September 14, some workers were gathered around a fire barrel, talking about their expectations.

I told them they make vital parts. The Flint Sit-Down Strike was successful because they made parts that completely shut down the largest manufacturer in the world. The Lear workers had more leverage than they thought. Already they had brought production to a halt at Ford’s most profitable plant in the U.S.

Local 2335 President Jaime Luna came to the picket line shortly after noon that day to announce that a tentative agreement had been reached. “We eliminated the second tier to bring the wages up to full scale,” he said in his announcement. “Our first-tier members got a wage increase, so everybody got an increase in wages and the top scale is $21.58.”

Members cheered the good news. Some asked questions about profit sharing, attendance points, and vision coverage. An official meeting to go over all the details was scheduled for September 21. Members began chanting “One Tier, One Lear” and “UAW, UAW.” Word spread quickly of the first blow to slay the two-tier system.

At the contract ratification meeting, members reported being told that if the contract wasn’t ratified at that time, they would lose a lot more, stay at a two-tier system, and possibly lose their jobs.

It seems odd to have to make that point for a contract that eliminated the hated two-tier system and offered senior workers an immediate eight percent pay increase. This contract should sell itself. Right?

Devil in the Details

Good news is always put up front when selling a contract.

There is plenty of good news. The Hammond Lear Plant will no longer have two tiers of workers. All will have a path to full pay and benefits. Everyone will get an immediate wage increase. Lower-seniority workers at the plant will see their wages increase by $1.40 per hour. Vision insurance will now be included for all employees.

Then the other shoe dropped: a second Lear Plant will be opening in nearby Portage, Indiana. “Lear II” will be considered a sub-assembly facility and will continue to pay lower wages.

Some of the work being done at the Hammond Plant will be moved to the Portage Plant. Of the 715 members at the Hammond Lear Plant, 130 of the lowest-seniority will be required to relocate to Lear II at the lower rate.

The Hammond Plant was reported to be the only one in the Lear system that still had cost-of-living adjustments for top-tier workers. The COLA amount was rolled into the wages and there will be no more COLA increases under the new contract.

The “silver lining” in the deal is that transfers from Lear Hammond will have recall rights and will be able to move into the higher pay scale if they return to the Hammond Plant, as attrition creates openings.

Another 120 members of Local 2335 work at a sequencing warehouse facility called Contract Services Group, where they were making around $8.50 per hour sequencing components for the seats. Now these workers will all move to Lear II, where they’ll get an increase to $12 per hour and annual increases until they reach the top wage at Lear II, $15.25 per hour.

Undoubtedly this contract is an improvement for all the current members of Local 2335. Unfortunately, many lower-seniority members are still left well behind. With the seating industry negotiating wages locally, competition of worker against worker (whipsawing) is always in the mix.

In the fight against corporate greed, the UAW flexed its muscle—then gave in before landing any real blows. I was told this agreement saved about 200 union jobs. What could have been accomplished if pay equity for all Local 2335 members had been pushed until corporate profits were in jeopardy?

Scott Houldieson is a member of UAW Local 551 and an electrician at the Ford Assembly Plant in Chicago.

CORRECTION: The original version of this article incorrectly stated that future hires at Lear II would not have transfer rights into the higher-wage plant. In reality, everyone who works at the second plant will have the opportunity to transfer to the main plant as positions open up through attrition.

Related
Opening the Door to a More Democratic UAW »
Auto Workers to Vote on Direct Elections »
General Motors Returns to Oshawa—But Offers Only Second-Tier Jobs in a ‘Pop-Up’ Plant »
Canadian Auto Workers Fight for Contract Transparency »
Can Auto Workers Win the Right to Vote? Here's How Teamsters Did It »