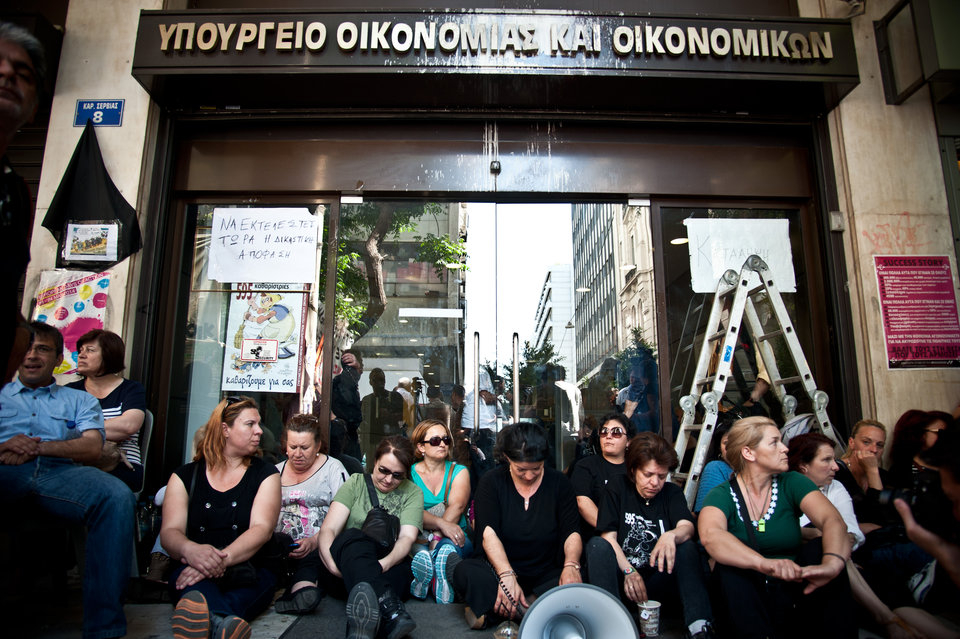 Fired janitors have been occupying the entrance of Greece's Ministry of Economic Development, among other creative tactics. Their fighting spirit is infectious. Photo: FOSPHOTOS Panayiotis Tzamaros.

Six hundred female janitors have become leaders in the movement against austerity in Greece.

These gutsy women have been standing up to the Greek government and the powerful “Troika” of the Central European Bank, European Commission, and International Monetary Fund for 11 months so far.

It began last September, when the 595 janitors at the Ministry of Economic Development, Inland Revenue, and Customs offices were placed on “reserve lists.”

That meant that for eight months (till May) they would be paid only three-quarters of their salaries of 300-650 euros a month. Then they would be sacked.

The Greek government’s plan was to privatize their work, as a gift to mafia-like private cleaning contractors. These tax-evasion champions would then re-employ them at about 200 euros per month (about $2.66 U.S. an hour), with almost non-existent security and no employment protection rights.

The fired janitors are poor women, 45 to 57 years old. Many are single mothers, divorcées, widows, have unemployed husbands, or are caring for disabled dependants. Many are indebted, have lost access to “early” pensions after 20 years, and have no chance of finding another job.

The government must have believed it could squash them like worms. But the women have a slogan: “We are cleaners, not idiots.” They decided not to give in.

The mass firing came because Troika “lenders” have imposed harsh cost-cutting terms on the public sector, in return for their 2010 “bailout” of Greece and other crisis-racked countries.

The excuse for these policies was to reduce Greece’s debt, which in 2010 represented 120 percent of its gross domestic product. Yet today that figure has only risen, to 176 percent.

Janitors were just the first target. The next group will be much bigger: 25,000 civil servants are to be laid off. The majority of these workers, too, are women. But the government started with the weakest, lowest-paid group, those with the least chance of getting support. The 595 fired janitors have brought renewed hope to the movement against austerity in Greece. "Clean for us," says this cartoon by Yannis Kalantzis, showing them sweeping away the Troika and Prime Minister Samaras.

The janitors are demanding immediate reinstatement. But rather than traditional union actions, they’re trying something different. Since they had already been thrown on public assistance, there was no point in going on strike. Instead they’ve chosen actions based on nonviolence, humor, and shock tactics.

For instance, they built a wall with their bodies in front of the main entrance to the ministry’s offices in Syntagma Square.

They’ve been using music and dance, wearing crowns of thorns on their heads during Easter and nooses around their necks outside the headquarters of New Democracy, the right-wing party of Prime Minister Antonis Samaras.

They occupy the entrance of the Ministry. They obstruct access, especially to Troika officials, chasing them and surrounding them, forcing them to run and enter through the back door with their bodyguards. They engage in physical skirmishes with special police units.

Every day they’re devising new forms of action, which are reported in the media and attract public attention, breaking through the isolation. It’s not by chance that these imaginative actions were created by women, who have to make a lot of noise to be heard.

What are usually soulless statistics—record levels of unemployment and poverty—now have a human face, in the form of real women with strong personalities and political volition.

Eye of the Storm

Women have participated in large numbers in Greece’s 26 general strikes since the economic crisis began. In the “movement of the indignant” they occupied city squares, set out camps, demonstrated.

They mobilised at the front line for the occupation and the independent running of ERT, Greece’s former public radio and television broadcasting corporation. (Employees took over and began broadcasting independently last summer after the government declared the corporation shut down.) Women became the soul of the strike committees of the universities’ administrative staff against the “reserve pool” policy.

Women also make up the vast majority of volunteers in the self-managed solidarity health organizations that are trying to deal with the human crisis and the collapse of health services.

The broad participation of women in these resistance movements is no accident. Women find themselves at the eye of the storm, doubly hit by cuts, since they make up both the majority of civil servants and the majority of users of public services.

The sacking of the janitors came at a moment when the resistance movement was becoming exhausted. After relentless austerity, many activists were demoralised, depleted, and felt forced to try to solve their own individual problems. Four years of austerity have transformed Greece into a pile of human ruins.

But the janitors’ example of courage and persistence is restoring hope to other victims of austerity. Their fighting spirit is infectious.

Of course, that’s exactly why the forces of law are almost daily bullying these women, to make an example of them and stop the phenomenon from spreading. The country watches the sad daily spectacle of women, many of advanced age, being trampled upon, manhandled, and injured by police “Rambos” who could be their sons.

In May a court ordered the government to immediately rehire the janitors. The ruling was later affirmed by the Greek Supreme Court. Yet, in violation of the constitution, the Samaras government has refused to obey.

A final decision on their court case is expected September 23. So the janitors are asking for international solidarity actions in the week leading up to that, especially on September 20.

They suggest rallies might target Greek embassies, the IMF offices in Washington, and the Central European Bank headquarters in Frankfurt. To help, contact the author at sonia.mitralia[at]gmail[dot]com.

Sonia Mitralia is a member of Women’s Initiative against the Debt and Austerity Measures and of the Committee Against the Debt – Greece. Follow the janitors on Facebook at www.facebook.com/595katharistries.

Related
Jordanian Teachers Union Leaves Behind Legacy of Wins »
Viewpoint: Don’t Count on New York Unions to Stop the Cuts »
With City's Economic Future in Doubt, Can New York Unions Stop the Cuts? »
Viewpoint: As the West Coast Burns, We Don’t Need Unity. We Need to Point the Finger at Those Responsible »
It’s (Way Past) Time to Redistribute Obscene Police Budgets to Schools, Hospitals, and Buses »