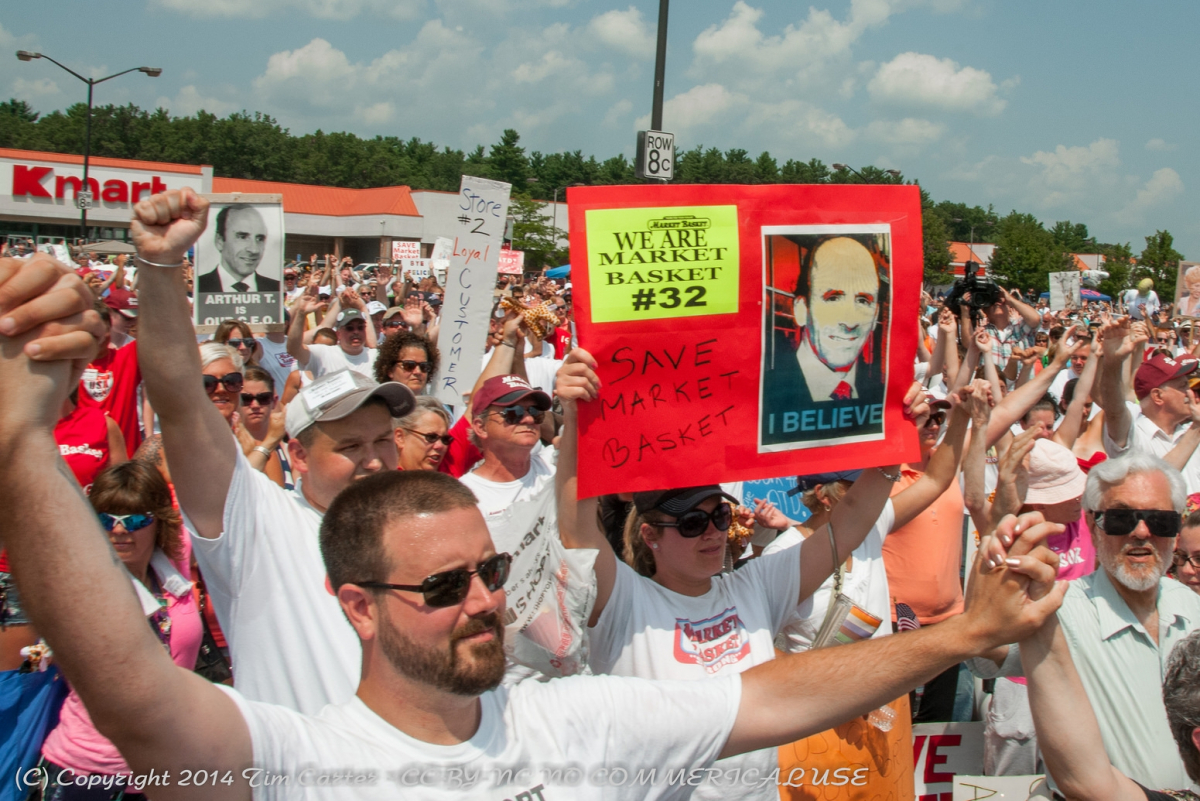 These workers are not confused--the new board they oppose is all about cutting costs, squeezing assets, and raising profitability on the backs of the employees. Photo: Tim Carter (CC BY-NC-SA 2.0)

What’s been big regional news for four weeks is breaking into the national consciousness with extensive coverage in the New York Times, NPR, and the Today Show.

It’s the story of the fight for Market Basket supermarkets in Maine, New Hampshire, and eastern Massachusetts. The employees are on strike and are waging a colorful and creative, community-based struggle to keep their CEO, Arthur T. Demoulas.

Arthur T. was thrown out by the Market Basket Board of Directors in June. The coup against him was led by his cousin Arthur S. Demoulas. The forced exit of Arthur T. is the culmination of a long family struggle for control of the family business, founded by Grandfather Demoulas in Lowell, Massachusetts.

Truck drivers, warehouse workers, deli counter attendants, top level managers, and checkers are all on strike, and have been for four weeks. The 71 stores are empty of all but dry goods, and even though the stores are open they are empty of customers, many of whom are loyal to the grocer because of the low prices and good customer service.

My mother is one of those customers who are not shopping there in solidarity with the strike. Customers are taping their receipts of money spent at other markets on the windows of the empty stores.

This is one of the most sweeping and captivating labor struggles in the private sector in years. There is no union. The employees are striking and protesting, at one rally 25,000 strong, for the return of their CEO Arthur T.

Are these confused workers bamboozled by their CEO and managers, many of whom are also on strike? NOT! The workers are loyal because they can read the handwriting on the Wall Street wall. The new board is about cutting costs, squeezing assets, and raising profitability on the backs of the employees. The employees correctly foresee a Bain Capital takeover in the style of Mitt Romney.

The striking workers are specifically “challenging the business model” proposed by the Market Basket board, said Chris Mackin, a long-time Boston-based advocate for worker ownership.

The outcome remains uncertain, but the power of 25,000 workers in motion and united with their customer and community supporters should not be lost on labor organizers. It is refreshing to see a real S-T-R-I-K-E in retail that paralyses commerce with the support of the customer community.

I showed a video of a news clip of the Market Basket struggle to a training for union bus drivers—and the reaction was surprising to me. I expected the drivers to focus on the fact that the workers were without a union, and were misguided in supporting their boss. Instead the participants in the training took inspiration from the passion and creativity of the workers and their close ties with their customer base. It was a great lead-in for a healthy discussion of building a driver-rider alliance.

To be effective, strikes require deep roots and ties among the workforce and broad understanding of their issues. In retail, they need a solid alliance with the community customer base. Organizers taking on industry giants like Walmart or organizing fast food workers at McDonald’s would be well advised to study the lessons of Market Basket.

Peter Olney recently retired as organizing director of the Longshore union ILWU. He has been a labor organizer for 40 years in Massachusetts and California. This article originally appeared on The Stansbury Forum.