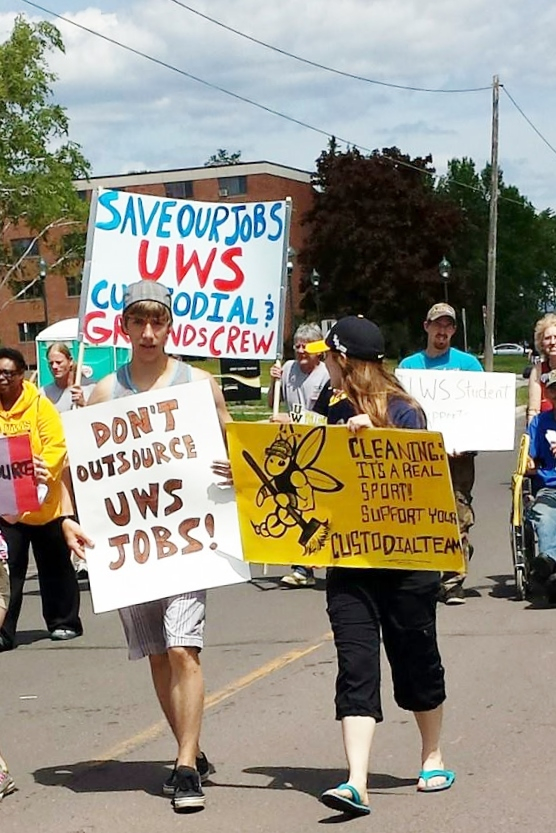 The fate of 26 custodians on a small University of Wisconsin campus isn’t isolated. It’s part of a trend: applying a market-based, private model to public higher education. Photo: Leann Stoll.

Glenn Khalar is ex-military, a vet. He’s worked at the University of Wisconsin-Superior for 16 years. He was raised in the area, and brought up his own family there. He loves Superior, and partially credits the university’s program to retrain and hire veterans for getting him his job.

But despite his passion, dedication, and modest wage, his job could soon be gone. In May, the campus announced plans to cut half its graduate programs, and sent “at-risk” notices to all 26 custodians and grounds workers—meaning they could be laid off at any time, and their jobs outsourced. The bookstore was outsourced on July 1.

Why? It’s the familiar refrain, budget cuts—and jobs like Khalar’s are the first ones to go. In their quest for financial stability in dire times, campus administrators seem to think eliminating his $12 an hour will make all the difference.

UW-Superior sits in the far northwest corner of the state, just across the river from Duluth, Minnesota. With 450 employees and 2,700 students, 90 percent of them from Wisconsin or Minnesota, it’s the smallest four-year campus in the UW system.

But what happens to custodians here isn’t isolated. It’s part of a trend to apply a market-based, private model to public higher education. And the danger is spreading south.

The threatened custodians and grounds workers are members of AFSCME. They have held protests and begun an online petition against the layoffs. The AFT local representing faculty and staff is supporting them.

Governor Walker’s union-busting law, Act 10, has limited the collective bargaining rights of all public employees—but in Superior, at least, it has not stopped them from continuing to organize and take collective action. A solidarity rally at the Board of Regents meeting in Oshkosh is planned for later this month.

“This is going to hurt the community, something severe,” Khalar wrote in a letter to administrators, “and hurt the campus and affect all students coming to this campus in the future…

“Considering there are not a lot of decent jobs in this area, you are now asking 26 employees to go even further backwards, financially, in life and maybe even losing their homes.”

Roots of the Budget Squeeze

UW-Superior Chancellor Renee Wachter blames drops in state funding, enrollment challenges, and tuition freezes for the cuts. She says the campus needs to make up $4.5 million in expense reductions and revenue growth over the next two years.

This is because, for decades, under both Democratic and Republican administrations, Wisconsin has reduced public funding for higher education, shifting the costs to students. The state’s investment in higher education (per $1,000 of personal income) has declined by 62 percent since 1980—the fifth-steepest decline in the country.

Governor Scott Walker cut nearly $300 million from the UW system in his 2011-13 budget, and another $66 million in the 2013-15 budget, while giving away hundreds of millions in corporate tax breaks.

Add to this a tuition freeze now in its second year. Most states that froze tuition in recent academic years did so because they slowly began to reinvest public funds in higher education. Not here. Wisconsin was one of the only states to freeze tuition and slash public funding for higher education at the same time.

Have UW administrators responded by forcefully advocating for the public good or the value of higher education for our democracy? By demanding a new social compact with the state? By defending some of the longest-serving, poorest-paid members of their community? By following the Kentucky State University president’s example and giving up part of their salary?

No. They advocate market-based employment, the commodification of higher ed, entrepreneurship in research—and “flexibility,” otherwise known here as outsourcing. And they’re starting with the 26 grounds crew members and custodians in Superior.

Three years ago, in the midst of the Wisconsin Uprising, university leaders and some faculty steeped in Walker’s worldview began advocating for increased flexibilities in budgeting, financial management, tuition, and construction.

They also began pushing for two new “personnel systems,” one for Madison and one for the rest of the UW system, each featuring a compensation structure “that allows each institution to consider market competition and merit pay.”

Market treatment for custodians in Superior apparently means outsourced for cheaper labor, with fewer or no benefits, and no workplace protections. If outsourced, custodians would not be part of the state employee system, and would have no say in campus governance.

“Flexibility,” of course, is provided only to campus administrators. Outsourcing has become a common quick fix whenever colleges are struggling with tight budgets. Those with the most precarious employment conditions are easiest to target, and thus the first to go.

Administrators say they target outsourcing for “non-academic” functions only. Curiously, they don’t include themselves in the outsourced list. Chancellor Wachter’s reported salary of $205,450 would pay for Khalar and seven of his co-workers.

In his 16 years on campus, Khalar says, “I’ve put out three fires. I stopped a bike theft from happening, with the help of Campus Safety. I’ve found numerous floods on my watch.

“I’ve found broken out windows and doors. I know when the air handlers are not working in a building. I know when something is out of the ordinary that needs attention from Facilities Management.

“Not to speak of the numerous students that I’ve personally shoveled out when they are stuck in the parking lots and even on the road as I’m leaving for home. I’ve found numerous lost and found items that are sometimes very valuable and have turned these items in, always… I have stayed in town so I am here to shovel and clear snow for the campus.

“These are some of the things you will lose when I am outsourced.”

University system President Ray Cross supports the continuation of a tuition freeze. He applauds the flexibilities and new personnel system. He also foresees a $62 million structural deficit in the next two-year budget cycle.

Jason Lee is a member of United Faculty and Academic Staff, AFT Local 223.

Related
After Strike Threat, Wisconsin Nurses Get a Possible Path to Union Recognition »
Wisconsin Nurses Set to Strike, As Employer Claims It's Banned from Bargaining »
Workplace Bullying in Higher Education is Rampant. We’re Fighting Back »
How Student Workers at Grinnell College Are Winning a Wall-to-Wall Union »
HELU: A National Strategy for Higher Ed Labor »