Ferguson: A String of Betrayals 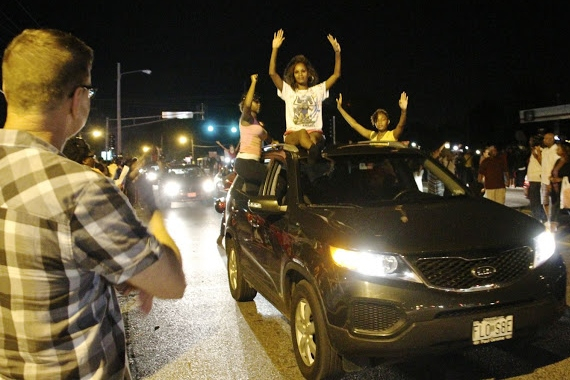 The conflict in Ferguson, Missouri, is about policing—but it is also about much more. To understand what's happened there, you also have to understand the outsourcing of industry, the housing bubble, and education reform. Photo: velo_city.

The conflict in Ferguson, Missouri, is about policing—but it is also about much more. It cannot be understood without understanding a backdrop of betrayals and stolen dreams.

Let me preface my account by saying that I have participated in three daytime marches in support of the people of Ferguson. The welcome from the community has been overwhelming, with people from cars, stores, and sidewalks joining in to encourage us and thank us for coming. The support for daytime protestors is broader than I have ever seen in any struggle. (I have not been there at night, so I can’t talk about that.)

Coming from St. Louis, Ferguson doesn’t look impoverished. The area through which we marched, like most of Ferguson, is 1950s-era ranch homes. We saw a couple of vacant houses, but not the number I’m used to seeing in St. Louis. The houses and yards were generally neat and well-maintained.

Looking past the signs of recent looting, the commercial strip along West Florissant appeared more prosperous than most commercial streets in St. Louis. Very few vacant store fronts—I only saw one. There were fast food restaurants, but also diners and locally owned family restaurants.

Mostly, the retail strip was made up of well-maintained, working-class neighborhood retail: hardware stores, beauty salons, dry cleaners, a drug store, a clothing store, a gun shop, and convenience stores.

Just two months ago, the Urban Land Institute and Focus St. Louis—two organizations largely made up of local government officials and white professionals—hailed Ferguson as a model municipality.

Appearances, however, are deceiving.

Whites were deceived, in part, because the white power structure in Ferguson reflects past realities, not current ones. In 1990, 74 percent of the population of Ferguson was white and 25 percent was black.

In 2010, that was practically flipped: 29 percent white and 67 percent black. City government and the police, however, are still white-dominated.

Institutional racism plays a central role in the troubles in Ferguson, but it does not act alone. I think that to understand what happened, you also have to understand the outsourcing of American industry, the housing bubble and credit crunch, and education reform and privatization.

One thing to understand is the place occupied by Emerson Electric.

Ferguson’s growth paralleled the growth of Emerson, which is headquartered there. During the 1940s, ’50s, ’60s, and ’70s, Emerson’s factories were the main employers in town.

In the late ’70s, Emerson began outsourcing production to low-cost, overseas factories—not all at once, but product by product. The population of Ferguson peaked in 1980 and has been shrinking slowly ever since.

Many older whites who had spent their working lives at Emerson continued to live in the community. But in the early 2000s, the white population fell by 35 percent, and the black population increased by a similar amount. Many older whites or their families took advantage of high prices and a booming real estate market to sell.

For many black homebuyers, it was their chance to get a piece of the American Dream. They were becoming homeowners, moving into what they thought was a nice, stable suburb, and accumulating wealth.

The credit crash and Great Recession betrayed those dreams.

Ferguson and neighboring municipalities in the northern suburbs of St. Louis were at the center of the crisis. Mortgage rates jumped. Many people in the wave of recent homebuyers found themselves underwater.

Home values in some Ferguson neighborhoods plummeted to half of what people had paid in 2004 or 2005.

Some people walked away from their homes. Some moved into other nearby homes that had been foreclosed on and turned into rental properties. Some dug in, fighting to keep the homes they had bought.

Supposed federal efforts to keep people in their homes never worked as advertised—and often seemed wrapped in endless levels of red tape and active resistance from bank regulators. Another betrayal, on top of the banks’.

Activists organized actions to help keep people in their homes, with limited success. Those connections, tactics, and alliances, however, would later provide structure to protests against police violence. Anti-foreclosure activists were among the leading organizers of protest marches in Ferguson in the days after police killed Michael Brown.

Speculators bought up foreclosed properties and turned many of them into rentals. People who had lost their homes could often stay in the city as renters.

The increased competition in the rental market kept rents down, which meant that some people who had aspired to move into neighborhoods like Ferguson’s, but couldn’t afford to buy a house there, could afford to rent one.

Meanwhile, as many people lost homes in the Great Recession, many also lost jobs, and even more lost wealth. Ferguson’s poverty rate jumped from 5 percent in 2000 to an estimated 24 percent in 2012. By comparison, the poverty rate in St. Louis is 29 percent.

As the recession waned and hope of a recovery began to sprout, Mayor Knowles and the city council, all white, acted to keep real estate values low. They appropriated money to buy up properties around the historic downtown, which they considered most attractive for redevelopment. They worked to buy land before owners declared any public intention of selling, lest, in the mayor’s words, “speculators could bid up the price.”

One has to wonder what people who had lost their savings and were underwater on their mortgages, hoping for a rebound in values, thought of this policy. It was applauded by the majority-white political and economic leadership of the metro area, however.

Knowles told real estate leaders in June that he was not ignoring Ferguson’s residential neighborhoods. His major neighborhood initiative was to urge people to form garden clubs and plant flowers. His view, he explained, was that beautiful appearances and low real estate prices would lay the foundation for growth and development.

Michael Brown recently graduated from the Normandy School District—about the same time the state government was stripping residents of their right to vote for the Normandy school board.

You have to look back a couple of years to understand how that happened. When Missouri’s education department gave up on trying to “turn around” the neighboring Wellston School District, the department forced Normandy to absorb Wellston.

Wellston was a very high-poverty district. Normandy was itself poor—seniors even had to share graduation gowns for their senior photos—but the state promised more resources and a waiver so that the Wellston students’ test scores would not count against its accreditation status.

It delivered on neither promise.

The promised waiver was important because of the education department’s aggressive focus on school “performance.” Their theory seems to be that nothing in a student’s life outside the school affects how the student does on a standardized test. And with the influx of Wellston students, Normandy’s test scores dropped.

The state board of education yanked Normandy’s accreditation last summer, when Michael Brown was set to start his senior year.

When a school district loses accreditation, any family in the district—regardless of how good their local school is or whether they even sent their children to public school—can send their children outside the school district, at the district’s expense. That’s one of the privatization and school-shopping policies that Missouri legislators have favored over school funding for the last 15 years. So instead of sending resources and expertise to specific schools that needed help, the state essentially told Normandy families, “You can leave if you want.”

Some people jumped at the chance to send their children to other districts. Some joined the flight, afraid of being the last ones left to turn out the lights.

But many families joined in a spirited protest movement to demand more state funding and keep the schools under local control. Learning from their neighbors who had fought the banks over foreclosures, they formed more alliances. Community groups and parents worked with teachers and district administrators to develop a detailed plan for better serving the district’s children.

Still, they lost their fight and concluded that the game had been rigged against them, again.

Other districts billed Normandy for tuition at much higher rates than what it had to spend on its own students, forcing it to gut already underfunded programs to stay afloat. Last spring, Normandy became financially insolvent.

Consistent with a pattern of depriving majority-black-school-district residents of the right to vote, the state board of education abolished the elected local board and took over, ignoring the community’s plan.

In police policies, racism was an even bigger factor.

Black people in Ferguson talk about how the police have long harassed them. City policy had been to finance the police department from fines for minor violations. Black people bore the brunt of this policy.

People resented it, but they put up with it. People can put up with a lot if they think it’s a trade-off for being safe. And they were largely safe. The rate of all violent crime in Ferguson was a fraction of the rate in St. Louis. Ferguson saw, on average, fewer than two murders a year.

Ferguson is not an area where people expected violence. People were not used to the killings seen in Chicago, Detroit, or St. Louis. So the killing of Michael Brown was a shock.

It all amounted to a violation of the implied contract that even though police might harass, they kept violence away. Another betrayal.

The police response that followed the killing heightened that sense of betrayal. To say the use of tear gas was indiscriminate minimizes the police response. They targeted black residents in their back yards, their driveways, and their doorways. They aimed tear gas canisters at individuals standing within their own property.

Black residents of Ferguson could not help but conclude that their whole community was under siege, and that the normal channels of influencing public officials were closed to them.

People in Ferguson tried to follow the American dream. They worked hard for a better life. They followed all the advice—to save money, to buy a house in a nice, safe neighborhood, and to accumulate wealth for their descendants.

Then they were betrayed by police, who took away their safety.

Peter Downs is a former president of the St. Louis Board of Education and author of Schoolhouse Shams: Myths and Misinformation in School Reform.

Read more about St. Louis-area organized labor's response to the events in Ferguson in “Mike Brown Is Our Son.”

Related
How My Co-Workers Got Me Reinstated at Amazon's San Bernardino Air Hub »
Non-Compete Agreement Leaves Workers Homeless and Jobless »
Victory Against Polluter Points Way to Clean, Green, and Fully Funded Schools »
Union from The Start (You Don’t Have to Wait) »
Viewpoint: Burgerville Workers’ Lessons for Independent Unions »