Part of the Job? Confronting Workplace Sexual Violence in Chicago 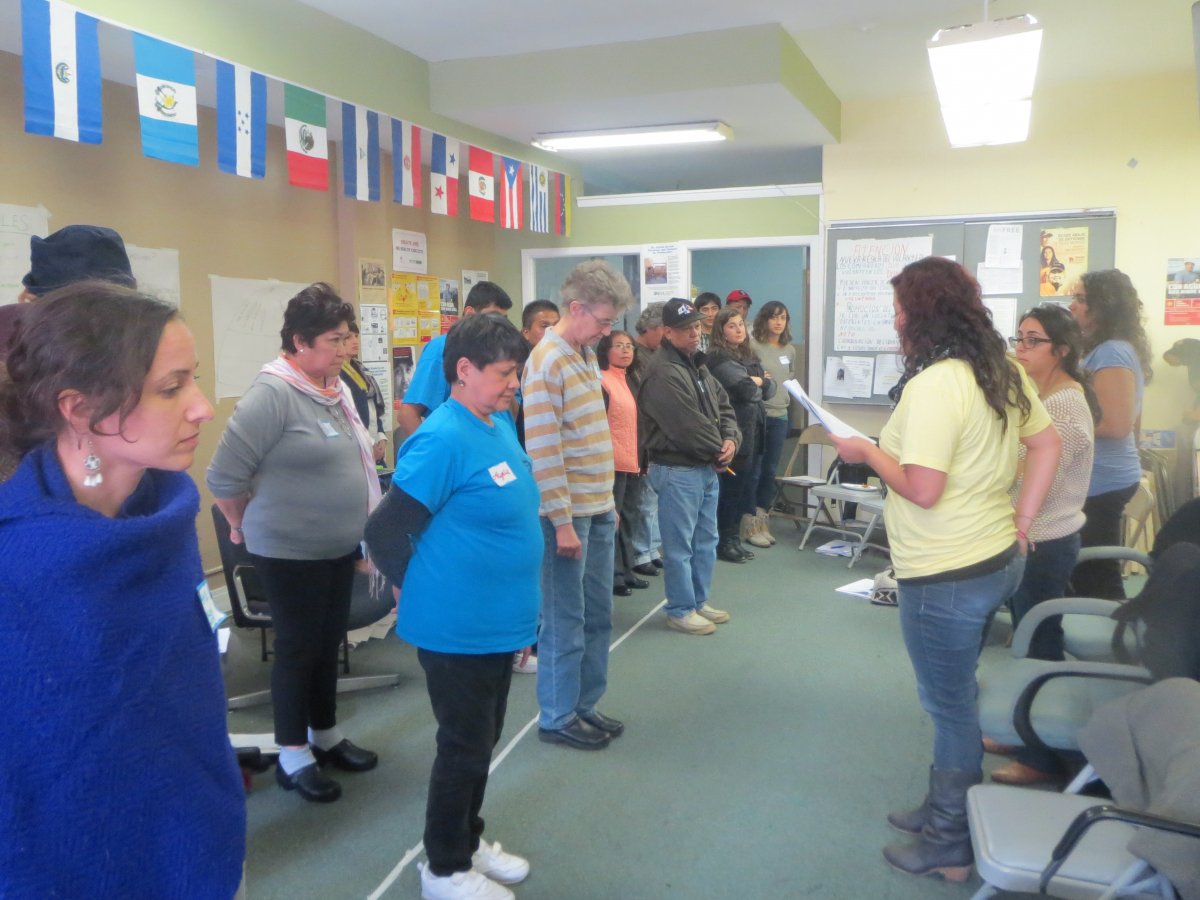 In Chicago, worker center organizers and advocates for rape victims have come together to form the Coalition Against Workplace Sexual Violence. The group is pushing a range of strategies—from legal avenues, to what bystanders can do, to legislative campaigns—to combat sexual violence at work.

CAWSV started in 2012 at a meet-and-greet between rape crisis advocates and worker center organizers, at a time when domestic worker organizing was building momentum in Illinois.

Illinois domestic workers are currently excluded from state protections against sexual harassment at work. So worker centers such as the Latino Union, ARISE Chicago, and the Chicago Coalition of Household Workers were at a loss when they met workers who had experienced traumatizing sexual harassment but were too scared to report—or had no legal recourse if they did.

Organizers voiced these concerns at the meet-and-greet. It became clear that, in a legal landscape barren of protection, rape crisis centers could help worker centers to support survivors of workplace sexual violence.

Stopping Sexual Harassment, Labor Notes’ 1992 guide, is still one of the most complete manuals out there. It has sections on member-to-member harassment, women of color, defending yourself, the legal route, and “an unhelpful union.” Order at labornotes.org/store.
♦ ♦ ♦

KC Wagner of the Worker Institute at Cornell University frequently does “train-the-trainer” workshops for unions, showing how to lead an interactive class on addressing and preventing sexual harassment, within the context of building union solidarity and promoting workplace respect. Contact her at kcw8[at]cornell[dot]edu.

Read a training for officers and stewards on member-to-member harassment, developed by the United Electrical Workers.

The half-hour film “Union Women, Union Power: From the Shopfloor to the Streets” (available on YouTube), directed and produced by the Young Women’s Committee of the Philadelphia Coalition of Labor Union Women (CLUW), highlights five union women and their fights for workplace democracy. The committee aims to use the film to introduce younger women to the labor movement, with women leaders as role models.

From the boardroom on down, women still get paid less than men—but read why what’s depressing most women’s wages is less the gap from men and more the gap from the top 10%.
♦ ♦ ♦

The days are long past when the job of the union women’s committee was to provide refreshments. A report from the Berger-Marks Foundation looks at what women’s committees are doing today and what impact they have. Download Women’s Committees in Worker Organizations: Still Making a Difference at bergermarks.org.

You might not want to actually hand your mother a pretend check on Mother’s Day, but the info on this site is interesting. The salary.com/mom-paycheck website breaks out the work hours of average moms at various tasks and calculates what they would get paid if they were being paid. Stay-at-home moms work an average of 94 hours a week and would collect a “mom salary” of $113,586 a year. Mothers with jobs do an average of 58 hours per week in household and childcare duties on top of their paid jobs.

Sexual violence at work can range from coercive “quid pro quo” arrangements where workers are compelled to provide sex in exchange for keeping their job or some other benefit, to “hostile work environments” where workers face degrading remarks, unwanted touching, or even criminal sexual assault. The most insidious harm of workplace sexual violence is that predators often frame submission as part of the job, convincing workers that acquiescing is the only way to hang on to their livelihood.

Low-wage workers with limited organizing power are some of the most probable victims of sexual harassment. Workers who struggle with poverty, lack of immigration status, and limited mobility in the labor market are the least likely to report workplace predators, and thus become their primary targets. CAWSV focuses not only on domestic workers but also on agricultural workers, undocumented workers, and other low-wage workers.

In a recent poll of 1,000 workers nationwide, one in five women respondents reported having been sexually harassed by a supervisor, but 68-70 percent did not report it. It is likely that the percentage of marginalized workers who don’t report is even higher.

The first training was held in October 2013. Through CAWSV, rape crisis advocates educate worker centers about the power-and-control dynamics that underpin acts of sexual violence. They walk organizers through the multitude of ways workers experience trauma, equipping them with information to combat victim-blaming stereotypes. They train organizers how to handle disclosures of sexual abuse.

In turn, worker center organizers share strategies for holding employers accountable for wrongdoing—strategies such as community mediation or campaigns targeting discriminatory workplaces. Labor organizers have also been instrumental in lobbying for legislation that would protect more workers against sexual violence, such as the Illinois Domestic Worker Bill of Rights campaign, which is currently in full swing.

Together, CAWSV folks have created an Illinois-specific legal guide for community organizers, covering existing laws that survivors of workplace sexual violence can use to vindicate their rights, like the Illinois Gender Violence Act, which provides all survivors of sexual assault with civil remedies against individual perpetrators.

They have also put together a 40-page community education curriculum to equip workers at different knowledge levels about sexual violence. One module teaches workers how to safely confront, document, and report abuse. Another module focuses on bystander intervention, which trains allies how to safely show their solidarity with co-workers. The curriculum borrows popular education exercises from both the labor rights and anti-rape movements.

While CAWSV is mostly composed of worker centers, unions have begun to get involved, too. Representatives from the United Food and Commercial Workers and the Workers Organizing Committee of Chicago/Fight for Fifteen campaign (which is agitating among food and retail workers for a higher minimum wage and paid sick days) attended the launch of the curriculum and gave thoughtful feedback.

Unions have been successful in the past in publicizing workplace sexual violence. Notably, in the aftermath of the Dominique Strauss-Kahn sexual assault investigation in 2011, the hotel workers union UNITE HERE took the opportunity to highlight how pervasive this problem is in that industry, organizing speak-outs in eight cities. Hotel workers have fought to be allowed to work in pairs, prop doors open when working alone, and wear pants instead of skirts.

Unions could benefit from building stronger ties with rape crisis centers, to give members access to greater resources for reporting rape and assault at work. Since workers are often afraid to report, and since sexual victimization can have devastating emotional and economic effects, the support of a group—such as one’s union, worker center, or a community-supported speak-out—can be a huge help to a survivor.

And coalitions like CAWSV could benefit from partnerships with unions, who bring hard-won political capital and the united power of their members. Together we’re a force strong enough to eradicate the shame faced by survivors of workplace sexual violence—and to bring such violence to an end.

Sheerine Alemzadeh is a co-founder of the Coalition Against Workplace Sexual Violence and an attorney at the Chicago Alliance Against Sexual Exploitation. For more information on the curriculum, contact her at sa[at]caase[dot]org.

The April 4-6 Labor Notes Conference in Chicago will feature a workshop on sexual harassment, and a women's caucus hosted by low-wage workers.