Turkish Unionists: 'We Are Not Terrorists' 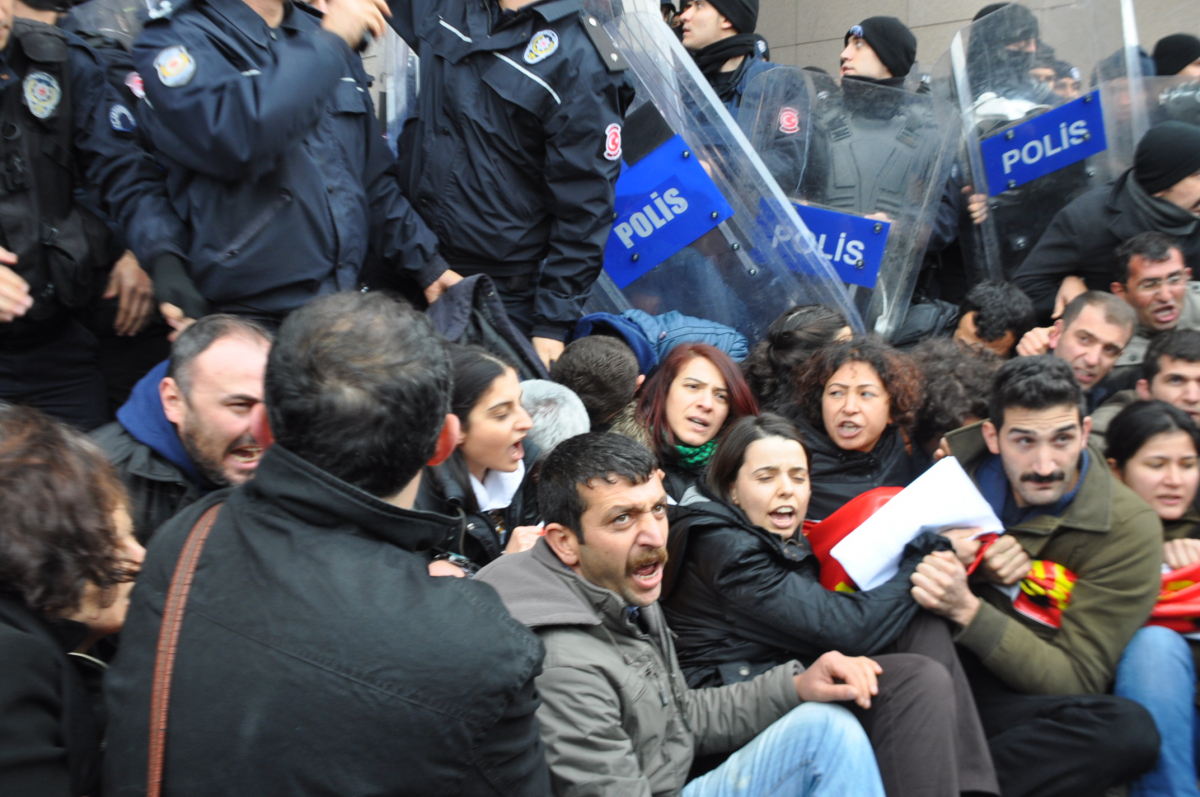 The right-wing government is using anti-terror laws to crack down on an old enemy—the union movement. But unionists could lead Turkey's development in a democratic and secular direction. Photo: DISK.

You can meet leaders from KESK and the Turkish metalworkers union at the Labor Notes Conference in Chicago, April 4-6. –Eds.

I was in Istanbul last week to observe the court hearing for 29 Turkish public sector unionists charged with membership in, propaganda for, and leadership of an illegal terrorist organization. After nearly a year in prison, the hearing was an opportunity to finally have their say.

One by one the defendants rose to give an account of their lives, their commitment to the union movement, and their denials of any involvement in terror. Opposite the courthouse, from the early morning, their fellow members of the public sector union KESK crowded a public square, raising huge red banners with photos of all 29 prisoners in the dock.

Turkey’s strict anti-terror laws are being used by the right-wing Erdogan government to crack down on an old enemy—the union movement.

What is at stake is huge. Turkey is going through a period of transition and change. If Prime Minister Recep Tayyip Erdogan and his allies prevail, the country faces a bleak future of authoritarian rule.

But if KESK and its allies have their way, Turkey can develop into a truly democratic and secular society. It could become a model for the entire region, something that Egypt, Tunisia, Libya, and Syria will aspire to.

The unionists now on trial were arrested after a suicide bomber attacked the U.S. embassy in the Turkish capital, Ankara, on February 1, 2013. He was killed, as was one other person. Three people were injured.

A small far-left organization known as the Revolutionary People’s Liberation Party-Front claimed credit for the attack the following day. The group has carried out armed attacks on the Turkish government for more than 30 years. The U.S. and the European Union have named it a terrorist organization.

But days later, police across the country raided the offices of KESK, as well as homes of KESK leaders. Nearly every leading figure in the union was arrested. As one Swedish unionist put it, the government was aiming to “decapitate” the union.

These arrests came in the wake of arrests of several hundred other KESK leaders and activists for their role in organizing demonstrations to protest the government’s neoliberal policies, including changes to the education system that are opposed by teachers (who are KESK members).

KESK has long been a thorn in the side of the Turkish government. Founded in 1995 and closely linked (though unofficially) to the left-wing DISK union federation, KESK’s leaders come out of the radical student movement. They and the Islamist AK Party now in power in Turkey are not the best of friends.

Overall, more than 500 KESK members were arrested. Nearly all were released within a short while—but in Istanbul, where 56 stand accused of membership in a terrorist organization, 29 of them spent nearly a year in prison.

In some ways, Turkey is a very successful society. It has become quite wealthy. Istanbul and Ankara are modern European cities in every sense.

But Turkey is also a deeply troubled society, riven by ethnic divisions (including a decades-long war with its Kurdish population), a corrupt government, and a bitter divide between secular and Islamist factions.

Unions play an interesting role. Not only are they strong forces for secularism and democracy, but they also manage to overcome the ethnic divisions that play so prominent a role in Turkish politics. Kurds are welcome members of most Turkish unions and sometimes play leadership roles. The government routinely accuses Kurdish leaders of unions like KESK of being supporters of the Kurdish separatist group, the PKK.

Turkey’s unions are acutely aware that fighting alone, they will be defeated. That is why they have appealed for, and to some degree received, the support of the European and global labor movements.

Half a dozen of us representing the international union movement attended the trial. We came from Britain, Sweden, Austria, Belgium, and Germany. We were seated near the very front, so that the prisoners—and their captors—could see that they were not alone, that they had the support of union brothers and sisters around the world.

The LabourStart website had launched a campaign calling for the leaders’ release 10 months earlier. Nearly 13,000 union members from dozens of countries sent protest messages to Turkey.

After three days, the court decided to release 23 of the detained unionists on bail. Six were considered too dangerous to let out on the street.

The KESK leaders will be in court again May 6. Meanwhile, hundreds of their brothers and sisters face the threat of prison, their trials still ahead of them.

All this is happening against the background of a greatly weakened Erdogan government. That government was already shaken by the extensive—and unprecedented—protests last June in Istanbul’s Gezi Park and Taksim Square.

What was widely seen outside Turkey as a spontaneous rebellion by ecologically minded youth was in some ways spearheaded by Turkey’s radical labor movement. The president of DISK, the radical union federation, was also the head of the Gezi Park protesters who eventually forced concessions from the government. DISK and KESK were involved in strikes that seriously challenged the regime.

In the last few weeks, Erdogan’s government has been shaken by allegations of corruption, leading to several ministers’ resignation. He claims that police and prosecutors are attempting to frame his allies, that he is a victim of a conspiracy.

His own movement is deeply divided, and rifts have opened up between the AK Party and the police. Erdogan has begun to court the army, offering to look into the many court cases that have led to the jailing of large numbers of army officers.

But the army no longer trusts him, nor do the police. These can be fatal weaknesses in an authoritarian state that is dependent on the army and police to stay in power.

It is against this background that Turkey will soon hold municipal elections. The moderately social democratic Republicans (CHP) may make gains here. Some are predicting that these may be the final months of Turkey’s experiment with an Islamist government.

Eric Lee is the founding editor of LabourStart, the news and campaigning website of the international union movement. You can meet leaders from KESK and the Turkish metalworkers union at the Labor Notes Conference in Chicago, April 4-6.