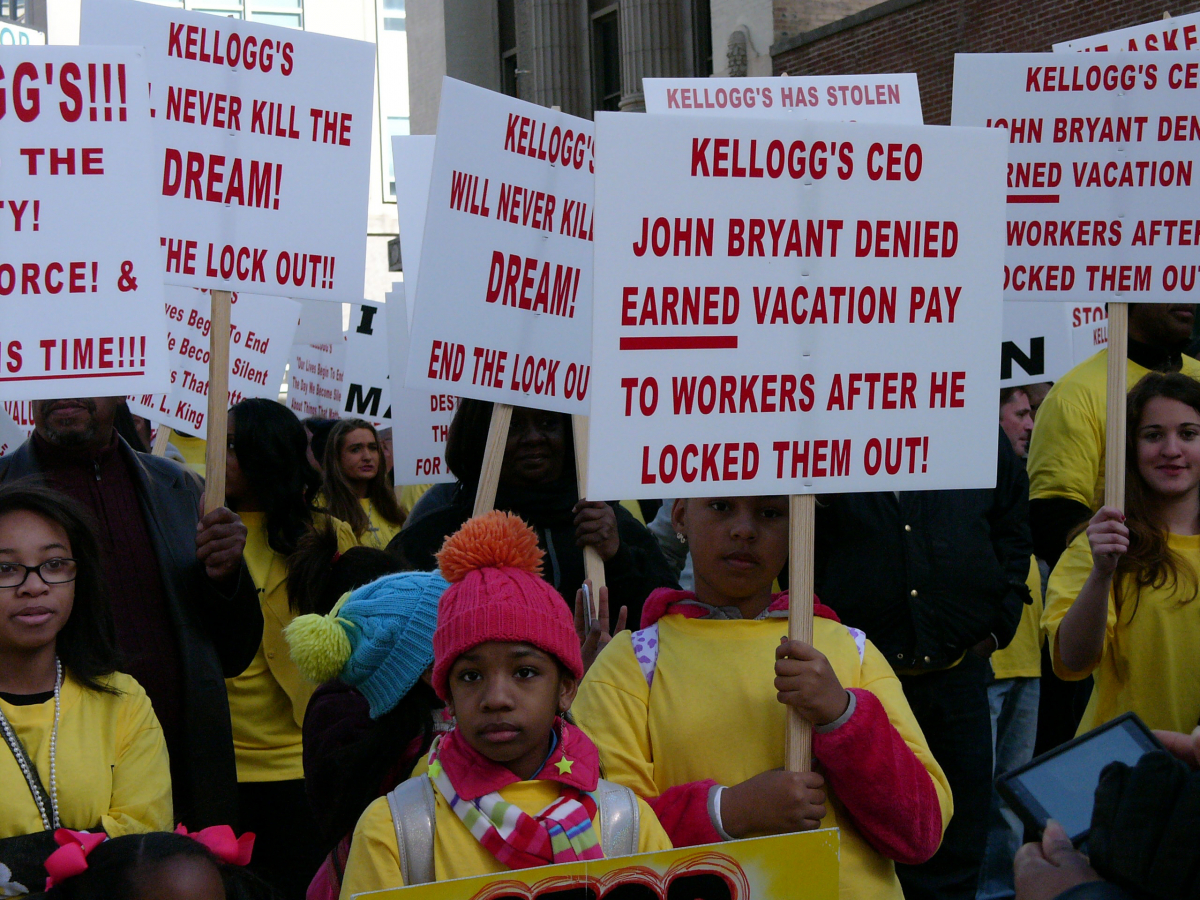 A hundred locked-out Kellogg's workers marched with 1,000 community members in the Martin Luther King Day parade in Memphis. The local NAACP is calling for a boycott. Photo: Schaeffer Mallory.

“We want every person to bring their ‘whole self’ to work every day,” says a Kellogg’s human resources manager in the company’s latest “diversity and inclusion” report.

But for more than three months now, 220 locked-out cereal workers in Memphis, a majority black, have had to settle for bringing their “whole self” to the frigid picket line at the Kellogg’s factory entrance. Workers maintain a 24/7 picket, with four to 10 workers holding signs.

Production continues uninhibited by the picketers. Scabs brought in by an Ohio company enter through a back gate. Cereal leaves by the trainload, heading east.

At a rally on Martin Luther King Day, the president of the Memphis chapter of the Southern Christian Leadership Conference (SCLC) called for a boycott of Kellogg’s products.

Rev. Dwight Montgomery said he had spoken with an organization of 300 ministers in the Memphis area, and that they had decided to ask “our congregation members to go talk to their friends, family neighbors... We are not going to buy any Kellogg’s products.”

He said the Memphis SCLC had written two letters and made several phone calls to Kellogg’s CEO John Bryant—but had not heard back.

Tens of Thousands in North Carolina Vow ‘Not Now, Not Ever’

Kellogg’s Delivers Memphis a Slap in the Face

Review: A Dream Foreclosed: Black America and the Fight for a Place to Call Home

“I want to make it clear,” Montgomery said. “We first communicated, tried to move this in the direction of resolution, before calling a boycott. We have been fair. We’re calling it nonviolent direct action for social change.”

‘Diversity and Inclusion in Our Plants’

More than 60 percent of the locked-out workers are black, reflecting the demographics of Memphis.

In 2012 Memphis was the setting for a meeting of Kellogg’s African-American Resource Group, discussing how to create an “inclusive environment.” Apparently, according to the report, “recruiting and retaining diverse employees in the Memphis area was proving to be a challenge.”

But Rev. Montgomery said the company could easily fix its retention problem: “[Kellogg’s] locked out people who are diverse, so bring them back!”

Kevin Bradshaw is president of BCTGM Local 252G, which represents the workers. He said that “without us being at work they don’t have any diversity. All their K Values don’t mean anything. Everything they mean, they did the opposite of by locking us out.”

Kellogg’s K Values include “involving others in decisions and plans that affect them.” Another Resource Group, K-Pride and Allies, was created to “Stomp Out Bullying.”

Locked-out workers take these messages with a grain of salt.

When asked about the Employee Resource Groups and Kellogg’s attempts at diversity and inclusion, Bradshaw said, “They’ve never approached us about them on a local level. They’ve got a whole team, but they’ve never put forth the effort in Memphis.

“These are not honorable people. They’ll say anything to look good. It’s all a bunch of corporate lies.”

Kellogg’s boasts in its report of the “ongoing work we are doing on our diversity and inclusion journey.”

A more cynical view of this “journey” is revealed in a section of the report titled “Kellogg Connects with Latino Customers through Targeted Marketing and Product Development.”

Kellogg’s claims its efforts at branding and marketing to Latino customers demonstrate its commitment to diversity. “Christopher R., associate director of multicultural brand marketing” is quoted as saying “my focus right now is ‘all Hispanic, all the time.’”

Civil rights organizations have rallied to the Kellogg’s workers’ cause. The A. Philip Randolph Institute organized a January 12 rally including speakers from the SCLC and NAACP. Many recalled facing violence in the 1950s and ’60s, and called for a return to the militant tactics of the civil rights movement, including civil disobedience to stop scabs from continuing production.

In his famous “Mountaintop” speech in 1968, Martin Luther King, Jr. also called for a boycott in Memphis. What began as a labor dispute—a strike by sanitation workers—had quickly escalated into a fight between Memphis’s black majority and its white economic and political elite. King called on the black community to boycott white businesses until the strike was settled.

“The rich are getting rich and the poor are getting poorer, and the people of Memphis are getting tired of it. Employers need to change their tactics and treat us fairer than what they’ve been doing.”

Steven Payne was an organizer with the Service Employees in Minneapolis for eight years. He now lives in Memphis.