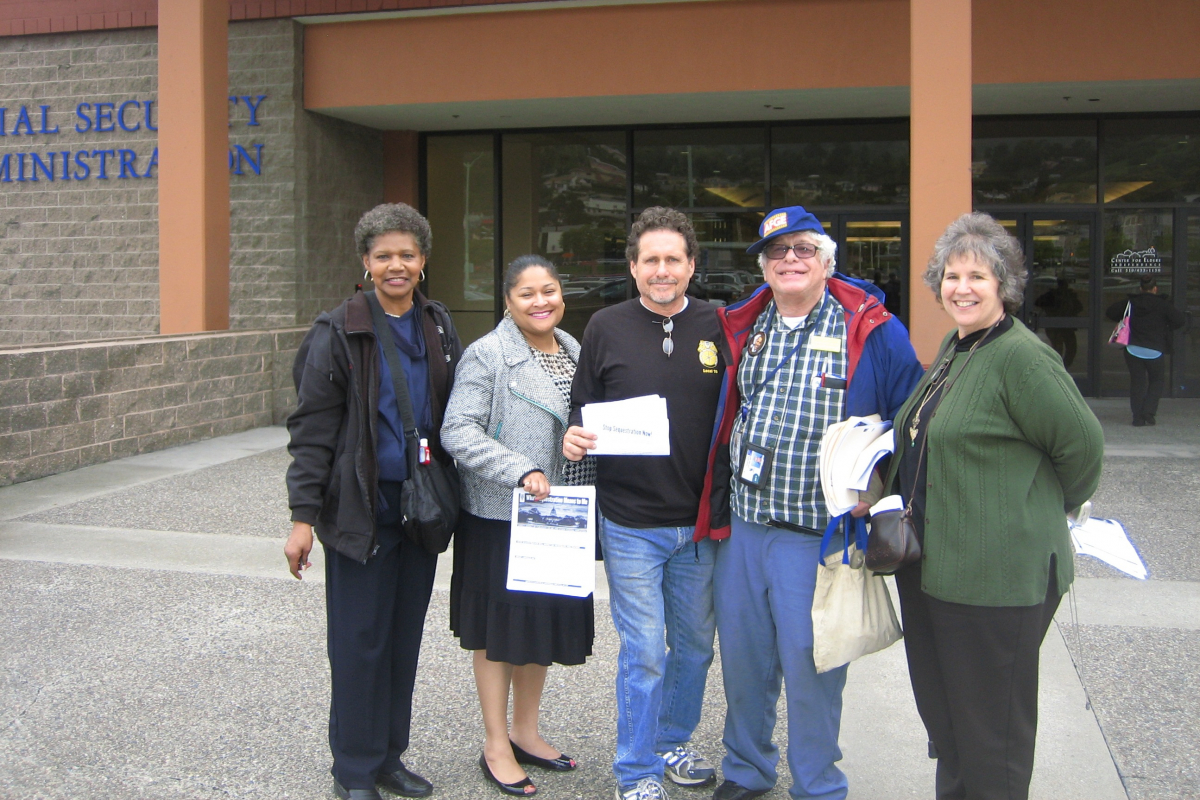 Federal workers (the author is second from right) distributed information on the effects of the sequestration at the East Oakland Social Security Office as part of a day of protest earlier this year. Now that the government is shut down, not only are some of us working without knowing whether we’ll be paid, we’re also doing it without union representation on the job. Photo: AFGE Local 3172.

Daniel Day Lewis won this year’s Oscar for portraying Abraham Lincoln and his struggle to get Congress to adopt the 13th Amendment, which banned involuntary servitude. Congress’ inability to pass a budget has shown me that, while the 13th Amendment may be in the law books, it means something else if you’re a federal employee.

Not only are some federal employees working without knowing whether we’ll be paid, we’re also doing it without union representation on the job.

As a result of the October 1 partial government shutdown, federal workers fall into two categories—those who are furloughed and those who are excepted. As excepted employees, Social Security workers are to report to work every day. If we don’t show up we are placed in furlough or AWOL status (depending on who we talk to; we are getting conflicting information).

If we are furloughed, chances are likely that we won’t be paid. If we report to work, we may or may not be paid. Unless Congress passes a continuing resolution, we will not receive any compensation for our activity.

As federal employees, we cannot strike legally. At the time we are hired we must agree not to strike.

Do Part of Your Job

When we work during the shutdown we can only do certain tasks, items our agency head has determined to be in line with what Congress calls the Anti-Deficiency Act. We have a sheet telling us what we can and cannot do and we give the paper to the public. Social Security employees like me can:

However, because of the Anti-Deficiency Act, we cannot:

While we may be working for pay or not for pay, depending on Congressional whim, we Social Security workers find ourselves literally defenseless. We have been given all kinds of conflicting advice about our status, but we cannot have our union, the American Federation of Government Employees (AFGE), represent us—nor can union reps and officials get released time to represent people.

If we do try to represent employees, we will be put on AWOL and put in furlough status, which means we may not be able to return to work until there is a budget.

Why? Simple. The agency’s lawyers, and apparently lawyers at the Office of Personnel Management, have ruled that—while federal unions, according to the Civil Service Reform Act of 1980, are in the public interest—union officials cannot be released to do representational duties during a government shutdown.

So we find that Congress, besides possibly creating a new class of involuntary servitude for federal employees, has also acted to attempt to bust our union.

Some people are coming to work sick because they are afraid to take off, and still others are foregoing scheduled vacations because they are afraid they may not be able to get back to work. Different managers throughout my Local 3172, which represents Social Security field office employees in Northern and Central California and Northern Nevada, have given employees different advice and orders. In some cases people on leave have been ordered back to work. In other cases people have been told that if they are sick and take leave, they will be put in furlough status.

All we can do is to keep on working. At lunch time—which is our own time, and for which we are not paid, even when we are paid—my sister and brother employees at the East Oakland Social Security office had an informational picket and urged the public to call Congress.

Related
Get Fossil Fuels Out of Our Pension, Say Environmental Protection Workers »
A Common Defense: Mobilizing Veterans in Labor to Beat Trump and the GOP »
Federal Agencies that Trump Hates Attack Their Unions »
Federal Workers: Shutdown and Out »
Trump Launches War on Federal Unions »