No ‘Instant Recess’ at AFL-CIO Convention 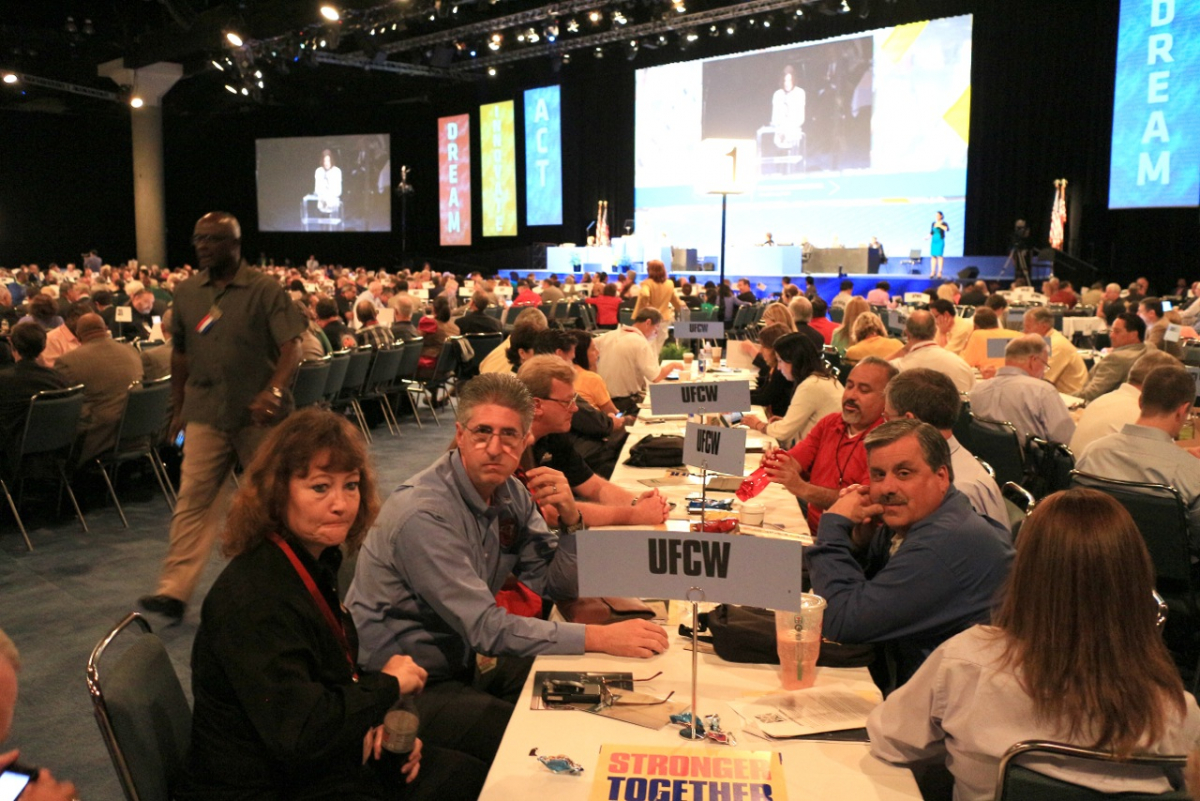 Kaiser Permanente had been scheduled to introduce delegates to several of its "wellness" products, until Kaiser workers protested. Photo: Slobodan Dimitrov.

Labor-management cooperation, that hoary holdover from the 1990s, was slated for a big plug at the AFL-CIO convention by a “model employer” and the unions that love it—but got booted yesterday when victims protested.

California’s giant hospital chain and HMO, Kaiser Permanente, had been scheduled to introduce delegates to several of its products, including “Instant Recess,” a trademarked component of KP’s corporate “wellness” program. Instant Recess promotes “short bursts of physical activity throughout the workday” (as long as it doesn’t involve union picketing!).

In a letter to AFL-CIO President Rich Trumka September 6, five Kaiser employees questioned why the AFL was showcasing Kaiser when the behemoth’s continuing drive for concessions on health and retirement had triggered statewide strikes by 20,000 of its workers in 2011 and 2012.

In a departure from past practice, the AFL-CIO has allocated time for about 50 daily “action sessions”—workshops. This smorgasbord tilts heavily toward political topics and seems designed to give the proceedings the trendy buzz of a Netroots Nation conference.

A bevy of invited guests from allied organizations are joining federation officials and staff, plus other union representatives, in discussions of “alt-labor,” new “digital strategies” for unions, and how to put more “Boots Online,” elect progressives to public office, and partner with philanthropies.

Many of these workshops showcase the federation’s new or old ties with community-based labor support groups, immigrant worker centers, and policy wonks from the Economic Policy Institute, the Democracy Initiative, and the Ford Foundation. (Not a single “action session” deals with issues of war and peace—or last-century labor concerns like wasteful military spending and the need to convert military production to something useful.)

Of the official convention “talking points,” the most used on opening day was the AFL-CIO’s need to make its past “transactional” relationships with non-labor groups (defined as “if there’s something they need they’ll reach out but after that you don’t hear from them,” in the words of one Chicago community leader) more “transformational” in the future.

As a backdrop for the convention, the federation is wisely showcasing a city much lauded for the revitalization of its local labor movement. On Saturday afternoon, young activists left the L.A. convention center and joined a scavenger hunt (dubbed the “Hunt for Justice”), which highlighted organizing among carwash workers and other immigrants.

Yesterday, the first formal session of the convention was preceded by a conference on diversity and inclusion, attended by more than 1,000 delegates and guests.

After today’s plenary, convention-goers will be invited to join “Workers Lift Up the City: Cut Out, Stand Out!,” an event orchestrated by Latino street artist and activist Ramiro Gomez. This creative foray into neighborhoods near the convention center will leave them bedecked with cardboard cutouts of workers, illustrating their essential role in local industries.

The writers, members of the National Union of Healthcare Workers (NUHW), noted that “multiple affiliates of the AFL-CIO are currently in the middle of an epic struggle at Kaiser to defend standards that workers have fought decades to establish.” The union most enmeshed in Kaiser’s cooperation and wellness programs is the Service Employees, which is not even an AFL-CIO affiliate. The NUHW technical and professional members asked Trumka “and the rest of the AFL-CIO to stand with us and not with this multi-billion dollar HMO.”

NUHW supporters at Kaiser in L.A. prepared a leaflet detailing their employer’s recent mistreatment of workers and patients that they planned to distribute to the 1,600 delegates and guests attending the convention’s opening session at 3 p.m. yesterday. In June California levied a $4 million fine against Kaiser for violating state law on the care of mental health patients.

So when asked about the status of the federation’s partnership with Kaiser at his press briefing three hours before that deadline, Trumka declared that “Kaiser will not be at the convention.”

Worker-boss love fests were celebrated in a different convention “action session,” however: “Don’t Be a Stranger: Labor-Management Partnerships in the Global Era,” about “new business models that work.”

No Opinions on Syria?

A booth reserved for Kaiser, among the other labor vendors peddling their wares outside the convention hall, remained vacant. It was soon occupied by U.S. Labor Against the War (USLAW), the brave network of local unions and central labor bodies opposed to America’s meddling in the Middle East.

Given the clamor for war from the White House, having USLAW on the scene to remind convention delegates about past disasters in Afghanistan and Iraq will be far more salutary than any workplace exercise tips from Kaiser.

President Obama was originally scheduled to appear in person at the convention this afternoon, but that trip was cancelled in favor of a televised message because he was too busy lobbying Congress—and expending valuable political capital—on America’s fourth military intervention in the Middle East since 2001.

At the press briefing yesterday, Trumka confided that “the president felt bad about not being able to come.” When asked whether the AFL-CIO might be taking a stand for or against Obama’s costly bombing run over Syria, Trumka said the federation had “no comprehensive position” on the matter. He didn’t expect that any Syria-related resolution would be introduced—a near impossibility at this late date, given the AFL-CIO’s notoriously opaque resolution-processing procedures.

Steve Early worked for 27 years as a national staff member of the Communications Workers in New England. He is the author, most recently, of Save Our Unions: Dispatches from a Movement in Distress, forthcoming from Monthly Review Press in November. He can be reached at Lsupport[at]aol[dot]com.