Who Speaks for China’s Workers? 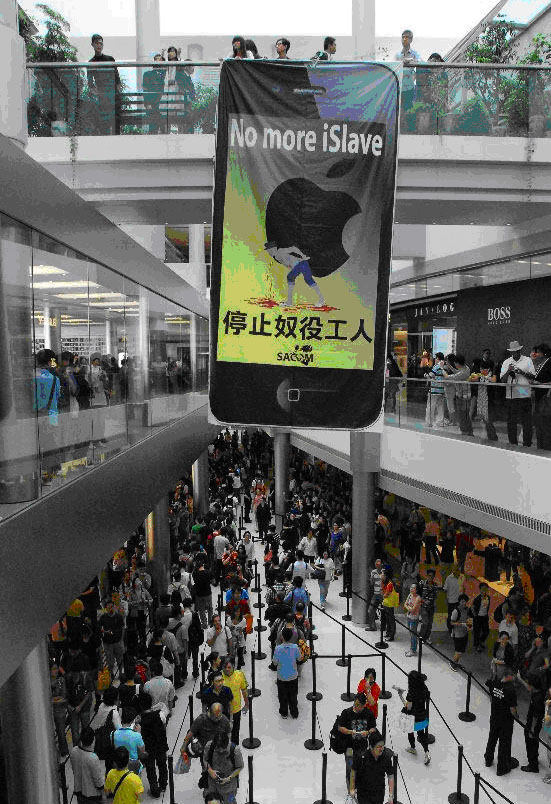 Leslie T. Chang, author of Factory Girls, received a standing ovation when she closed her TED Talk about the lives, aspirations, and—above all—upward mobility of China’s workers who make our products.

Feeling Good about Yourself

It’s a feel-good, “happy worker” story, filled with young women who start at the bottom in factory jobs, then rise by taking courses to become sales executives, secretaries, English instructors, and entrepreneurs, starting successful businesses of all kinds. The Chinese dream fulfilled!

Chang is excited to find that Lu Qing Min and many other young assembly-line workers do have funny and surprising ideas to share, so she sets out to rescue these “faceless masses” from oblivion.

Chang shows us the branded leather purse Min gave her; it refreshes fond memories. She suggests that our purchase of imported commodities from China—and other countries in the global South—has helped worker/consumers like Min to improve their lives. Min’s is a world of consumption: iPhones, LeSportsac handbags, Coach purses, and, yes, even a second-hand Buick!

For Chang, the experiences of Min and her fancy-free sisters in a changing China finally lay to rest some old-fashioned Marxist formulations about labor, production, and consumption. She offers Min as a global icon of a successful Chinese worker: young, self-driven, and supremely hopeful.

Asked how she would advise Apple executives on their Chinese operations, Chang suggests they offer English classes and computer training to self-motivated workers. That’s simple and uplifting. Hence the applause; there’s no need for any of us to feel concern about the Chinese workers who toil in sweatshop conditions to produce the goods we cherish. After all, they are free to leave their homes in the countryside, to work in a booming export sector that rewards them with the identical products.

What is life really like for China’s 262 million rural migrant workers, the core of the new working class?

Young Chinese workers, better educated than their predecessors, have strong expectations of higher wages, better working conditions, and career advancement. The rural households from which they come retain land-use rights to small plots of land in their native villages. For many, this land staves off starvation in times of adversity, but it cannot provide a livelihood—least of all for the increasing numbers of second- or even third-generation rural migrants who grew up in the cities and have no farming skills.

Young migrants generally return to their villages only to marry and have children. This pattern persists because most “low-skilled,” “low-educated” migrants are not permitted to change their household registration (hukou) from rural to urban. Even after years of working in the city, these families are denied equal access to many welfare, health, and retirement benefits, and their children cannot receive urban public education, especially in the higher grades.

This spatial separation between production in the city and child-rearing in the countryside means that rural migrant workers cannot become completely proletarian; they are caught between two worlds. Min “chooses” to pursue “a life that is worth living,” but is only able to do so by leaving behind her two daughters and her husband in the village.

Twelve-hour days of high-speed repetition on a production line are not pleasurable or self-fulfilling. Chang tells us, however, that the pressures and pains of the assembly line do not matter to these young workers—much less alienation from the products of their labor. They “could not care less about who buys their products.” What they do in the factory, and how miserable their living conditions are, is unimportant to them. They live to earn income and to buy designer goods in the bustling city of Dongguan (in South China).

“Birds, don’t be silly, no one cares whether you’re tired from flying, people only care how high you fly!” writes Ou Yang, 19, a woman factory worker from rural Hubei in China’s central region, on her blog (my translation).

Yang, like many of her peers, does not identify herself as a peasant; she has no experience of farming, has no desire to live in the countryside, and has known the city throughout her life. For the post-1990s cohorts of migrant workers, the higher their aspirations, the sharper is the contrast to their grim reality.

Rather than investigate the challenges faced by this new generation of workers, Chang reaffirms her own narrative: a myth of personal struggle and success.

Within 12 months in 2010, 18 young migrant workers attempted suicide at facilities of Foxconn, China’s largest private employer and the primary manufacturer for Apple and many other electronics giants. Fourteen died, while four survived with crippling injuries. These workers were between 17 and 25—in the prime of youth.

The tragedies alarmed Chinese society, as well as the international community. The responsibility is not Foxconn’s alone—although, as the manufacturer of more than 50 percent of the world’s electronic products, it is an enormous player and bears direct responsibility. Nor are the problems limited to Foxconn workers or to those producing Apple products.

They extend far beyond the factory floor, to the global corporate giants headquartered in the West and East Asia, who put the profit squeeze on Foxconn and other producers in their commodity chains.

Former Foxconn worker Yan Jun wrote this poem in memory of her fellow workers who had committed suicide:

For My Departed Brothers and Sisters

I was just like you:
A teenager leaving home
Eager to make my own way in the world.

I was just like you:
My mind struggling in the rush of the assembly line,
My body tied to the machine.
Each day yearning to sleep
Yet in despair, fighting for overtime.

In the dormitory, I was just like you:
Everyone a stranger
Lining up, drawing water, brushing teeth
Rushing off to our different factories
Sometimes I think I’ll go home
But if I go home, what then?

I was just like you:
Always yelled at
My self-respect trampled mercilessly
Does life mean turning my youth and my sweat into raw material
Leaving my dreams without a soul, collapsing with a bang?

I was just like you:
My eyes, lonely and exhausted,
My heart, agitated and panicky.

I was just like you:
Entrapped in rules
The pain makes me wish for an end to this life.

The only difference:
In the end I escaped the factory,
And you died young in an alien land.
I see in your determined bright red blood
Once more the image of myself
Pressed and squeezed so tightly I cannot move.

Jun’s generation misses their parents and loved ones. Many think of “going home”; nevertheless, the hopes and dreams of most remain fixed on the cities. They have fled stagnant villages that hold, for them, only the promise of slow death.

Chang discourages global consumers from reflecting on the workers who manufacture our iPads at heavy personal cost. Indeed, she naively suggests we pin our hopes for workers’ well-being on the benevolence of Apple.

As one of the world’s biggest and richest companies, Apple goes through the motions of policing its suppliers while distancing itself from responsibility. But Apple causes illegal forced overtime by imposing short delivery deadlines on production. Apple forces down wages by pressing for ever-lower prices. Labor disputes over wages and benefits, overtime work, production safety, termination of employment contracts, exploitation of student interns including child labor, and forced job transfers have surged.

Chinese workers have joined a range of actions—from lawsuits to wildcat strikes. Some of these actions have achieved remarkable success. Apple and Foxconn now find themselves in a limelight that challenges their corporate images, requiring that they at least pay lip service to labor reforms.

But workers at 1.4 million-strong Foxconn who have tried to voice their concerns have been blocked by management or the company’s union, affiliated with the state and the Communist Party. The Chinese state’s regulatory power is potentially strong—yet it has chosen to permit, and even facilitate, deepening inequalities.

In this multilayered network of corporate interests and state power, young migrant workers in the rapidly growing industrial sector are struggling to define and defend their rights. As the labor shortage drives up minimum wages, and aggrieved workers hold protests, all these forces are combining to challenge the low-cost, export-oriented development model.

Conscientious consumers in the U.S., China, and other parts of the world are calling on Apple and other global companies to respect workers’ rights and dignity. But no corporation can behave “conscientiously.” That would violate the iron principle of maximum profits.

How could institutional consumers at universities leverage their purchasing power to pressure Apple to comply with national labor laws and their own corporate codes of conduct? The campus-based digital product market has become highly competitive. This means concerned students and faculty can mobilize to leverage their universities’ purchasing power to require Apple to assume responsibility for factory conditions. What if student activists were to picket iCampus (authorized Apple campus stores) and negotiate with university administrators to press Apple to recognize the legitimacy of Foxconn workers’ demands?

University anti-sweatshop movements in the West have had success against apparel multinationals. They’ve helped unions in developing countries negotiate with Nike, Adidas, and Russell Athletic. Students and faculty, with support of international trade unionists and non-governmental labor groups, have gained access to brands’ suppliers in Mexico, Honduras, Indonesia, and other countries to monitor working conditions, facilitate the signing of collective contracts, and support the formation of unions through democratic elections.

If the new generation of workers succeeds in building real unions and community-based workers’ centers, they will transform the future of labor and democracy, not only in China but throughout the world. These—as the TED Talks tagline advertises—are the real “ideas worth spreading.”

Jenny Chan (wlchan_cuhk[at]yahoo[dot]com) is an advisor to SACOM (Students and Scholars Against Corporate Misbehavior) in Hong Kong. She is a co-author, with Pun Ngai and Mark Selden, of Separate Dreams: Apple, Foxconn and a New Generation of Chinese Workers, forthcoming. The author would like to thank Ellen David Friedman for her warm encouragement.

And thanks for the care for China and the chinese labors.And do not believe most media in our nation, including some media who derss up as the voice of the workers —we workers speaks for ourselves. I'm glad to share the news with any friends who are interested in Chinese workers' fighting and struggling.If you need these news please contact us.

I'm a member of a Chinese NGO which serves the labors.The Chinese workers I know are more than this. Most workers , especially those youngsters, don't agree with those who wanted to suicide in Foxicoon because they think they are too weak to fight against the capitalists. Our workers are brave and they are fighting in a very special environment different from the USA and other nations. You can not judge their victories and bravement by unions or those so-called 'formal' actions .And one of the most important points is that ,most of our workers know we cannot win unless we change the whole world and this nation. There are 20000—30000 strikes in our nation each year , most unknow or ignored by the world outside us, and our workers have gained victories.I believe our workers will be a powerful working class in the futrue , and we will all see that.