Why the Millionaires Tax Was Worth Fighting For 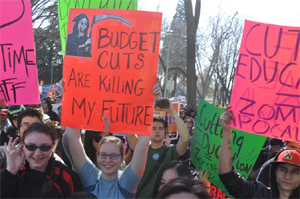 The tax compromise made by the California Federation of Teachers resulted in major improvements to the ballot initiative that could be in front of voters in November. But backers of the millionaires tax should have bucked the governor's deal and continued their struggle to reverse endless austerity. Photo: Steve Rhodes.

We’ve gotten quite a bit of feedback about the decision by leaders of the California Federation of Teachers and their community allies to withdraw the “millionaires tax” ballot initiative. The CFT did so after striking a compromise March 14 with Governor Jerry Brown.

There is no question that the deal made major improvements to Brown’s initial proposal and catapulted the CFT and its partners into a major role in California politics, a good thing for the labor movement and the rest of working class California. Within the labor movement, the fight over the millionaires tax undoubtedly tilted politics in a more progressive direction, too.

Despite all this, there are still compelling reasons why proponents of the millionaires tax should have rebuffed the governor and pushed the tax ahead to the November election. The decision to pull back is a setback in the struggle to reverse the endless austerity provoked by the 2008 financial meltdown.

As Good as It Gets?

Many observers of California politics argue that the CFT and its allies pulled off a major coup. They stuck to their guns when the governor pressed for a deal in November. And by plowing forward with their own ballot measure, they injected the wildly popular idea of a millionaires tax into the debate over how to plug California’s budget deficit, and they also extracted important concessions from Brown.

The compromise initiative will bring in more money for the state than either the original Brown proposal or the CFT’s millionaires tax. (See a side-by-side comparison of how the original proposals stacked up.)

The compromise boosts the tax rate even more for individuals earning over $250,000, and the new measure cuts the regressive feature—a half percent sales tax—down to a quarter percent. Under the compromise, 85 percent of new revenue will come from tax hikes on top earners, with only 15 percent from the sales tax.

The deal is even more striking given that the CFT was actively opposed, or left twisting in the wind, by labor’s much larger players in California state politics. The Service Employees state council and the California Teachers Association carried Brown’s water to battle the CFT and its allies.

In November appointees from SEIU International pushed through a statewide binding endorsement of Brown’s original ballot initiative, tying the hands of public sector locals that wanted to back the millionaires tax. And in February they stepped up their attacks. SEIU state director Dave Kieffer called Brown the “adult in the room” when it came to finding revenue solutions, dismissing out of hand any attempt to address tax questions outside of the narrow confines of acceptable Sacramento politics.

Millionaires tax supporters hoped to at least get an endorsement from the California Teachers Association (the National Education Association state body), especially after CTA’s largest local affiliate, United Teachers Los Angeles, backed the tax. But in the weeks leading up to the compromise, the CTA began telling its members the millionaires tax was fatally flawed, taking a similarly hard line in the press.

The CFT was also getting pressure from above, with American Federation of Teachers President Randi Weingarten reportedly pushing for a compromise in order to avoid a showdown with the state’s Democratic establishment. At the same time, Democratic legislators were threatening to punish the CFT when budgets are crafted later this year, targeting the CFT’s base in schools and universities for even more excruciating cuts.

Besides the brass-knuckles opposition from Democratic lawmakers and their allies inside SEIU and CTA, other unions stood by with their fingers in the wind. While several endorsed the millionaires tax, most notably the Nurses (CNA) and the Longshore workers in Northern California (ILWU), none put real money behind it, leaving the CFT and its allies scrambling to evaluate whether to forge ahead.

Reports vary, but millionaires tax supporters appear to have collected a third of the required signatures to qualify for the ballot, and it’s unclear whether they had the financial or logistical resources to secure the required signature numbers by the end of April without additional commitments.

Many supporters of the millionaires tax hoped the Occupy movement would boost their organizing, but Occupiers didn’t muster the interest or discipline necessary to mount the tightly coordinated, unglamorous work of signature gathering. Their real potential would have been on display during campaign season, turning glitter bombs, mic checks, and all manner of creative disruption loose on the state’s millionaires, in the same way that California nurses hounded Arnold Schwarzenegger and Meg Whitman during past election campaigns.

If there was a real possibility that the millionaires tax was not going to make it onto the ballot, then by compromising the CFT made the most out of a bad hand.

But if CFT and its allies had secured sufficient resources to get the millionaires tax in front of voters in November, here are six reasons why they should have rebuffed the governor and stuck with it—even though they would have faced a fierce onslaught from corporate opponents.

Bait and switch. One worrisome aspect of the deal with Brown is that he continues to gather signatures for his original ballot initiative, ostensibly as a fallback in case the compromise measure fails to qualify. With only six weeks to gather close to 1 million signatures, that’s a real risk. This raises the equally real possibility that the governor has induced millionaire tax supporters to withdraw their measure without enough time to get the compromise on the ballot, thereby clearing the field for Brown’s original proposal, which relies more on a regressive sales tax.

99 to 1. With just two words, the “millionaires tax” captured what’s wrong with our upside-down economy, and who should foot the bill to set things right side up. The millionaires tax wasn’t a stop-gap aimed at plugging the current budget hole—a limitation of both Brown’s measure and the compromise, which sunsets after seven years. It was a permanent turn towards a more equitable tax structure. Victory could have closed the door on the knee-jerk anti-tax politics that have defined California for a generation. The new measure misses the mark at defining a new common sense for the state.

Money isn’t everything. The resource question haunted the millionaires tax campaign from day one. How much money could the CFT and their allies get from the rest of the labor movement? How much would business interests and billionaires pour into a campaign to defeat it? Money has become the shorthand for evaluating success in politics, and it’s a trap.

With tight timelines and high ballot qualification thresholds, resources are necessary to hire signature gatherers and mount a field campaign. But unions will never be able to match corporate pocketbooks, and it’s time we stopped listening to the army of consultants, political strategists, and ad makers telling us that money is the only tool we have at our disposal. The millionaires tax could have been bulletproof at the ballot box if its supporters had been willing to get out there and fight for it.

John Kerry learned this lesson too late, after he declined to back a 2004 ballot initiative to raise the Florida minimum wage. The measure won big—unlike Kerry—sweeping every county in Florida despite being outspent more than 4 to 1.

Break the insiders’ grip. Outside consultants and in-house lobbyists are focused on the access that comes with playing the politicians’ game. When you break ranks and run your own program, there’s always blowback. Legislators threatened to punish CFT members during the budget process, and turned a cold shoulder on their lobbyists and policy specialists in the corridors of the statehouse.

But this payback for independence and initiative was a small price compared with the promise of winning, which could have broken the grip that insiders have on labor’s political strategy. As the complicated wrangling with Governor Brown demonstrates, too often unions are taking our cues about what to do, and what’s even possible, from Democratic Party operatives. Politicians may tell you this is the last straw, but they always come back. In fact, you can count the fact that they’ll always cut a deal. We can’t afford to be so predictable.

Lay our cards on the table. One of the paradoxes of politics is that everyone praises transparency, but laying your cards on the table makes it impossible to bluff. That’s a problem for politicians, but it shouldn’t be for unions. The analogy with strike preparation is instructive. The union hand is strongest when everyone has debated the issues, knows the decision points, and has a clear picture of what are and aren’t strike-worthy issues.

Compare this scenario to the common practice in today’s labor movement, where only a handful of officers and insiders know how big decisions are made and most rank-and-file members are in the dark. This breeds confusion and cynicism, but more importantly, it reinforces the idea that members are just pieces on a chessboard. Who is willing to take risks in this kind of environment? If you’re going to ask members to make sacrifices, you can’t be surprised when those who’ve stepped up want a say over what to do when faced with hard choices. The millionaires tax campaign could have been a turning point for the state’s labor movement, offering a concrete opportunity to model a different, more democratic way of doing politics. Missing that chance cost us more than dollars and cents.

Be willing to lose. It’s a necessary risk, if we’re fighting for something worth winning. And it’s the only way to pull the Democratic Party in a different direction, a move most unions consider a pre-condition for reversing today’s austerity. The Tea Party learned that lesson almost instinctively, and it’s why the Republican presidential candidates trip over themselves to lay claim to the conservative mantle.

If we blink every time there’s a showdown, then politicians like Jerry Brown will always count on that reflex. This dynamic will consistently drag politics rightward. We also know from the civil rights movement and labor’s 1930s upsurge that most great successes were not achieved on the first outing. A string of losses usually preceded a big breakthrough. If we’re not willing to live with a loss, then we’re never going to have the breakthrough.

Mark Brenner is the former director of Labor Notes and is currently an instructor at the University of Oregon's Labor Education & Research Center.
Related
New York City Retirees Fight to Defend Their Medicare Benefits »
California Continues to Record Dozens of Workplace Covid Outbreaks Every Day »
Insatiable Shipping Companies Set the Table for the Suez Canal Ship Debacle »
The Grocery Companies Denied Us Hazard Pay—So We Went Over Their Heads »
Global Cleaning Workers Share Their Struggles as the First Line of Pandemic Defense »