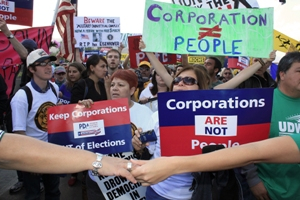 Editor’s note: Hundreds protested Sunday outside a Southern California resort where corporate executives and conservative political leaders gathered to strategize. Twenty-five were arrested when they sat in the street, blocking the resort entrance.

Featuring environmentalists, progressives, and contingents from AFSCME and the California Nurses, the demonstrators said those looking to explain why a terrible crisis continues for workers and unions should take a closer look at those inside the resort.

The annual gathering, called by the secretive oil billionaire Koch brothers, has hosted right-wing Supreme Court justices Antonin Scalia and Clarence Thomas—whose decision in the Citizens United case opened the sluice to unlimited corporate cash in elections from the Kochs and other shadowy, conservative billionaires.

Fong Chuu, a California Nurses member and operating room nurse at the UCLA hospital, explains why she took part.

We came Sunday to join a grand coalition and have a single voice to “uncloak the Kochs,” showing corporations that their money cannot silence the people's will and they cannot buy our vote.

Sunday’s demonstration did just that. I am glad I had this chance to be a small part of the movement, to educate myself and others, and to work in coalition with dozens of groups, coming together to stand up to corporate power.

Traditionally nurses are quiet and submissive. They do not like to make waves or strong statements. I have been a nurse for almost 28 years. I am a first-hand witness to how patients suffer and struggle through the health care bureaucracy in the richest country in the world. This is why I protest.

VOICES FROM THE STREETS

“We work for the welfare department in Orange County. There is a war against us and our retirement benefits now. The Koch brothers pour money into the Tea Party, and then they attack us and all public workers.”
Sandra Fox, president of AFSCME Local 2076.

“I’m here because the Koch brothers are part of a nationwide attack on all workers. Their aim is to destroy Social Security, Medicare, and unemployment insurance.”
Keenan Sheedy, steward and vice chair of the bargaining committee of SEIU Local 721.

“Our pay hasn’t gone up for three years, but the cost of everything else has. The Koch brothers and the Tea Party blame us, and we’re drowning.”
Minea Garcia, executive board of AFSCME Local 2076.

“We’re against the Citizens United decision, and the two Supreme Court judges—Scalia and Thomas—who meet with the Koch brothers. Their plans and politicians are against working people. The public needs to know who’s behind these bad policies.”

“They’re cutting our hours, and that hurts our kids.”

Mara Mendez, a home health care worker who cares for a disabled child. She’s a member of United Domestic Workers of America, Local 3930, in nearby Indio.

“The Citizens United decision allows corporations to donate millions of dollars to politicians to support corporate interests, and against the interests of working-class families. The Koch brothers are behind this. They are against health care reform, public education, rebuilding our infrastructure—anything that doesn’t support the 1 percent, the millionaires and billionaires.”

Everyone I know that I have talked to that are against unions,tells me I am why the cost of goods and services are so high. I am a UAW member in manufacturing,since I started working for a union plant in 1997 I have seen the Union plants in my area beat down on labor pay bellow what most non-union plants are making,with alot of manufaturing plants voting in two and three tier pay scales. The companies during nagotiations tell the union if we dont vote this in they will close the plant.The local unions have fallen for this crap,I vote no every time lower wages are brought into the new contracts. Now it has been used in hundreds of plants ,all over the country saying the same thing. How far, will we the people who make these corperations millions and millions of dollars continue two run our wages into the ground. I say we need to organize our unions in the United States as they do in the European Union and Canadian Unions, If one Union goes on strike for a just cause every union in the United states goes on strike, a National Union of the United States, The only thing running up cost of goods and services is corperate greed and million dollar bonuses for executives that probably doesnt deserve it. I wish someone would throw a million my way.We now are a country ran by who or witch corperation throws the most money at the politions making the laws,not we the people for the people. What do you think would happen if we all picketed like they are in Egypt ??? Enough said for now...We need a show of force like in the old days,and not give into corperate threats. I say again we need a National Union ,I have named it" National Unions of the United States" or NUUS UNITED ,Who`s with me ???