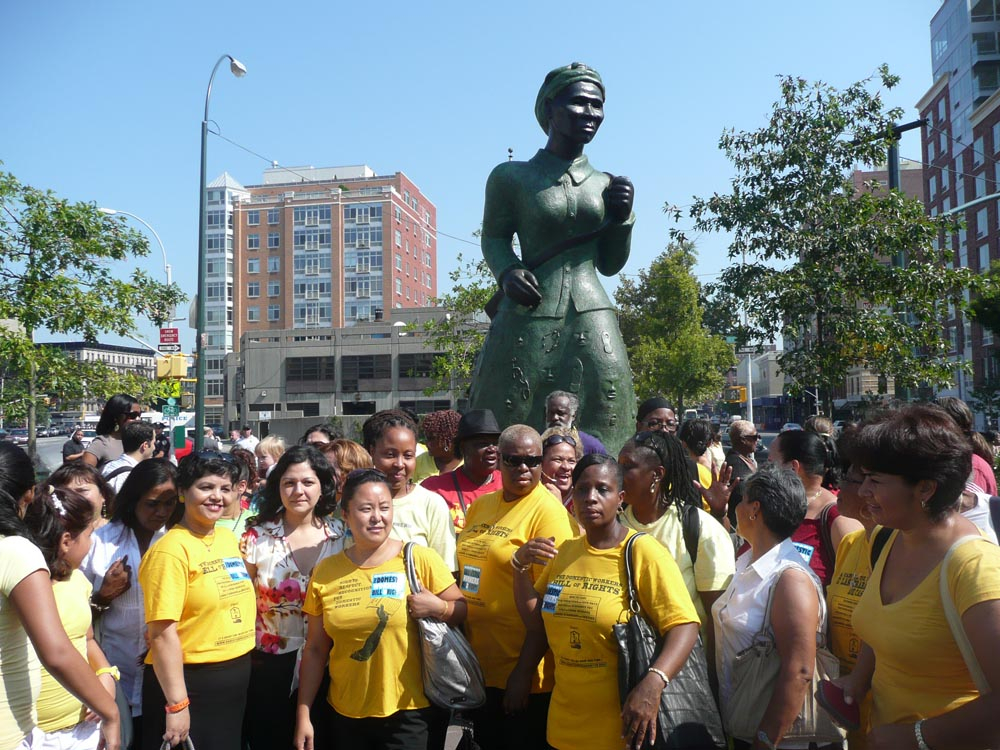 Domestic Workers in front of the Harriet Tubman memorial in Harlem. The were there to celebrate a new law, signed by the governor August 31, that makes New York the first state in the nation to provide domestic workers with on-the-job protections.

Domestic workers gathered at the foot of the Harriet Tubman memorial in Harlem today to celebrate New York’s groundbreaking domestic workers legislation, which the governor signed into law at a nearby community center. Deloris Wright told the crowd of fellow domestic workers, supporters, and reporters, “Today is about generations of domestic workers that came before and those who are still to come.”

Wright is a member of Domestic Workers United (DWU), the organization that spearheaded the legislation.

The new law guarantees domestic workers time-and-half pay after working more than 40 hours and ensures at least a day off each week. They will also be covered under the state’s worker compensation and anti-discrimination laws and gain access to unemployment insurance. The law mandates the state Department of Labor to study the feasibility of collective bargaining for domestic workers and report its findings by November.

Organizers hope New York’s new law is just the first step in unwinding 75 years of exclusion from federal labor protections. Domestic workers—along with farm workers—were written out of the National Labor Relations Act in 1935, part of a political compromise with Southern senators to exclude the largely African American workforce. Governor David Paterson started the ceremony with a blunt review of this history of racial exclusion.

“We have toiled for centuries in the shadow of slavery,” Wright noted. “This is a reminder of the legacy of struggle domestic workers are part of.”

Domestic workers are already looking for ways to spread their organizing success far beyond New York. According to DWU director Priscilla Gonzalez, the new law can serve as a “beacon of hope of what can be done when workers organize.” Through the National Domestic Workers Alliance workers are pushing for similar legislation in other states, with California at the top of the list. They are also linking up with other workers excluded from federal labor law through the National Excluded Workers Congress, formed at this summer’s U.S. Social Forum.