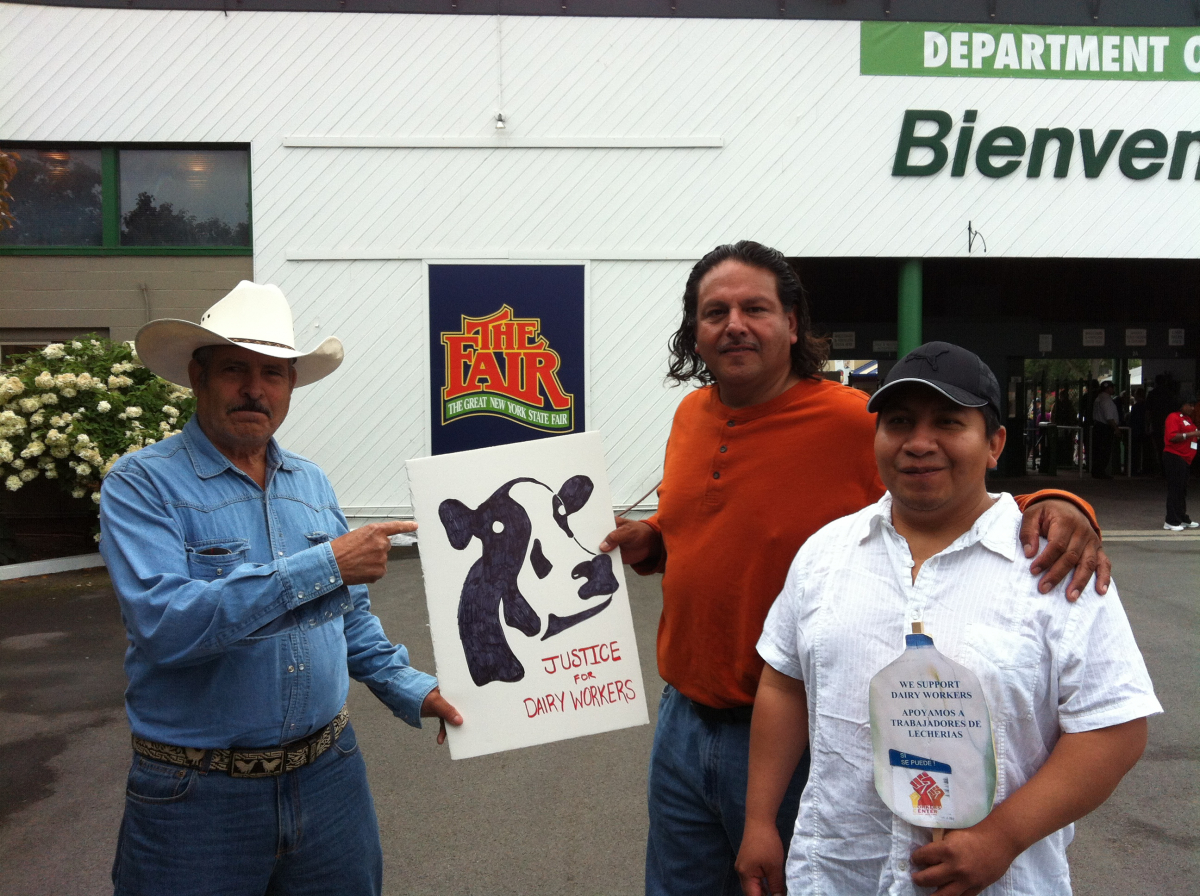 Inside the gates of the Great New York State Fair in Syracuse, crowds ogled the butter sculpture and drank from the 25-cent-per-cup milk bar.

Fair organizers had promoted the August 26 “Dairy Day” as “a way of saying thank you to all the dairy farmers that provide us with the state’s official beverage, milk.”

But outside, activists shook rattles made of empty milk gallons, played cowbells, and chanted, “Milk cows, not workers!”

“I’m not sure people understand the situation we live in,” said Enrique Pereida, a dairy worker on an Onondaga County farm.

Pereida could not attend the rally—because, as is typical for dairy workers, he works seven days a week. “With our pay, we hardly cover our needs,” he said.

Like all farmworkers, dairy workers are excluded from national labor law’s guarantees of collective bargaining rights and the right to overtime pay.

And like many other farmworkers, a majority are undocumented. Under persistent threat of arrest and deportation, and lacking transportation, many rarely leave the confines of the farms, where they live and work under awful conditions. Besides isolation, they experience employer intimidation and wage theft.

“[The bosses] take advantage that we do not know our rights or that we are afraid to exercise our rights, because they will threaten us with calling the police or immigration,” declared a worker leader from a farm in Lewis County. He could not attend but had a spokesperson deliver his speech at the rally.

“They keep for themselves thousands of dollars that we need to survive and feed our families,” the worker said. “More than anything, I want people to know that we are organizing ourselves and we need your support to make sure there is change.”

The Workers’ Center of Central New York is supporting the dairy workers’ efforts. Organizer Rebecca Fuentes has spent the past five months visiting the geographically dispersed workforce on farms around the region, offering “Know Your Rights” and OSHA trainings and teaching dairy workers to document their hours and working conditions using cell phone cameras.

Organizers visit workers at their houses when workers can confirm that their boss is not around. This is always risky; in one instance, the workers live in a room attached to the cow pens.

Workers endure shocking living and working conditions. Fuentes said they are often crammed into pest-infested trailers without enough beds to match the number of inhabitants.

They are subjected to crushing workloads and have to milk thousands of cows at ever-increasing speeds. At one “megafarm,” four workers are responsible for milking 4,000 cows by machine in a 12-hour shift. Monitored by camera, if they are deemed too slow they are summarily fired, as happened to one worker who had worked on the farm for five years. In February Francisco Ortiz was crushed and killed by an auger device on Sweyolakan Farm in Tompkins County.

The equipment workers use is often old, making the tasks more laborious and dangerous. Much of the activity is quite repetitive, as when a worker does nothing but clean teats all day. Injuries are routine; workers have the pains and scars to show it. The most often reported injuries stem from being kicked, stepped on, or crushed by a cow.

Yet the dairy workers Fuentes has met are enthusiastic to better understand their rights and push for change.

At one farm in Marietta, workers came together to demand time off the job. The 11 Guatemalan workers had been working for years without a scheduled day off. Exhausted and fed up with the difficulties of trying to arrange such simple things as a trip to the grocery store or to church, they decided to confront their employer, who initially refused. It wasn’t until the workers collectively threatened to leave the farm that the employer relented and started rearranging the schedule to allow one day off a week.

The workers don’t talk about this as organizing. Instead, they talk about asking the boss “to make things right.” “We were tired and needed to rest,” they explain.

That victory has been used to demonstrate to others the value of collective action.

In just a few months, the Workers’ Center has helped dairy workers from six different farms secure more than $3,000 in stolen back pay. Wage theft typically occurs when employers fail to provide workers with their last paycheck. In these six cases, a staff member of the Worker Center contacted the employers, explained the law, and demanded the payment owed. Several of the employers insisted they did not have to pay because workers had failed to give proper notice before departing. After considerable pressure from the staff of the Workers’ Center, via calls, letters, and emails, these back wages were paid.

Dairy workers from several of these farms have formed a committee and are starting, with the help of Fuentes and others, to reach out to nearby farms, spreading news of the victories. One of the biggest challenges they face in this organizing is securing transportation between farms.

Oughta Be a Law

Maria Gutierrez, national health and safety coordinator for Interfaith Worker Justice, joined Fuentes for a recent training. “Although I'm not a person that cries easily, this weekend I couldn’t avoid getting my eyes wet,” she reported afterwards.

On the dairy farms, she said, “animals are treated like machines, and workers are treated the way we say it is inhumane to treat animals....Workers are told that injuries and accidents are part of the job and that they should ‘toughen it up.’”

The Workers’ Center organized the August 26 rally to make fair-goers aware of the abuses suffered by dairy workers, and to build support for fairer practices in the industry. The Central New York Area Labor Federation and others co-sponsored.

Ultimately, the Workers’ Center aims to mobilize dairy workers and advocates to pass state legislation. The Farmworkers Fair Labor Practices Act would grant farmworkers basic labor rights and protections—including the right to overtime pay, the right to a day off, and the right to collective bargaining.

In this approach, the dairy workers are treading in the footsteps of another group of workers excluded from federal labor rights: domestic workers, mostly immigrant women who do childcare, elder care, and housekeeping.

Domestic workers and farmworkers were excluded from 1935’s National Labor Relations Act in a deal to get racist Southern senators to vote for it. Both groups of workers were majority African-American in those days.

Domestic Workers United made history in 2010 when its members persuaded New York legislators to pass the country’s first Domestic Workers Bill of Rights. The law guarantees them overtime after 40 hours, one day off each week, three days of vacation a year, protection under worker compensation and anti-discrimination laws, and access to unemployment insurance.

Gretchen Purser is an assistant professor of sociology at the Maxwell School at Syracuse University and co-chair of the board of the Workers’ Center of Central New York.

Related
Viewpoint: Abolish the H-2A Program! »
Trouble in the Tulips: Organized Farmworkers Win Basic Demands in a Quick Strike »
The Hows, Whys, and Whats of ULP Strikes »
Mexico’s Only Independent Farmworker Union Struggles On Despite Obstacles »
Billionaires Can Have the Cosmos—We Only Want the Earth »