Race to the Top: Unions Asked to Play Ball for Education Dollars 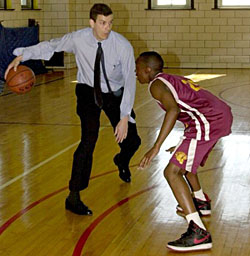 With all eyes on Obama’s fraught health care push, his plans to overhaul public education have sped along with relative ease. The first leg of the federal "Race to the Top" competition finished January 19 when 40 states sent applications for a piece of the $4.35 billion in stimulus funds.

Education Secretary Arne Duncan stands ready to dole the cash out to states that most closely model his prescriptions: seeding new charter schools, opening up to alternative certification programs like Teach for America, tying teacher evaluations more closely to student test scores, and instituting merit pay provisions. States and local districts also score points in Duncan’s book by outlining plans to close or hand over schools with low test-score performance to charter operators—forcing entire teaching staffs to re-apply for their jobs in the process.

The contest, says Obama, puts education funding “in competition,” and will award 15 states in April. Round two of the contest will begin in June.

In a nod to teachers unions, both of which lent support—uneasy at times—to the Obama candidacy, Race to the Top awards states that get unions to sign onto applications. The results have been neither uniform nor smooth. Dozens of local and state unions refused to sign agreements in support of state applications, claiming they were not privy to the details of the hastily forged plans—some comprising more than 1,000 pages.

Teacher federations in Michigan and California refused to back their states’ applications. The California Federation of Teachers long ago swore off the plan, and was recently joined by the California Teachers Association in opposing the state’s application.

Governor Arnold Schwarzenegger has cut $17 billion from the K-12 budget in the last two years, and the CFT says a potential $700 million infusion of federal cash is peanuts. And while federal aid would provide short-term help to strained local budgets, the strings attached to the cash would do long-term harm to public education—and the quality of teacher jobs.

Dozens of local unions opposed Race to the Top for fear of vague state and district proposals that could endanger existing collective bargaining agreements and lead to unprecedented privatization. Ten states and hundreds of districts and local unions bowed out, unwilling to exchange autonomy for the promise of federal dollars. Vermont education officials and unions deferred to the second round of the contest, claiming that the money promised was not worth the required changes to their structure. Vermont does not allow charter schools to operate.

But several cash-strapped states have responded by pushing education legislation to improve their odds in the contest. Whether or not they receive the funding, dozens of states go into 2010 with altered education codes—no doubt the administration’s goal.

Following Illinois, which doubled its charter school cap in June, Tennessee and Louisiana passed laws to expand charters. In early January, the Illinois legislature—shooting for upwards of $400 million—raised the bar again, passing laws allowing data from student test scores to be used in evaluating teachers, and opening the flood gates to “alternative certification” programs like Teach for America and Teaching Fellows, which produce high teacher turnover in “high-needs” schools.

Michigan, looking into the abyss of perennial budget shortfalls, passed far-ranging laws allowing the state to take over the lowest-performing schools and appoint a “CEO” to redesign them.

AFT President Randi Weingarten had mixed reviews of the application process state to state. She lambasted state officials in New Hampshire and Florida for including unions on only a cursory basis. In Ohio, however, she had nothing but praise for the collaboration, in which both state teacher unions signed onto an application that proposes “public-private” partnerships to overhaul failing schools. Still, local unions and districts representing just over half of the state’s 2 million students refused to apply for the money.

As expected, unions are facing the brunt of the “obstructionism” charges. How can labor stand in the way of big-time federal aid, especially when state and local revenues have been decimated by the recession?

Anticipating this, both national unions have made an effort to maintain “critical support” for the Obama education agenda. The National Education Association fell more to the critical side over the summer, proposing a different set of criteria for federal funding.

They criticized the administration’s focus on charter schools as a “silver bullet” solution for all types of school districts—pointing to Arizona (a state with no charter cap) as the example of unfettered charter expansion spawning corruption and mismanagement. The NEA also batted away Duncan’s heavy-handed push to “interfere with collective bargaining laws” in advocating the use of test data in teacher evaluations. As for the Obama/Duncan push to close or turn failing schools over to charters (replacing the staff), the NEA countered with a proposal to prioritize existing staff in school improvement plans.

Obama's Race to the Top presents public education activists with an uphill climb: to expand federal funding for education while fighting like hell to keep private profiteers from reaching further into public coffers and public schools.

Related
As Omicron Rages, Teachers and Students Fight for Safety Measures in Chicago and Elsewhere »
Why (and How) Michigan Nurses Rebuffed a Raid on Our Union »
Teachers Strike against a ‘Heartless’ School Board in Biden’s Hometown »
As Strike Looms, UC Lecturers Raise the Stakes »
Michigan Nurses Defeat AFT-Backed Raid »

The privatization of a 4000 billion dollar per year global expenditure is advancing to form. The RTTT protocol ensures success for the model created by the WB and IMF to bring a business model to the education of our young. This last frontier allows the entities of enlightenment to caress our childrens' backs in the name of corporate profit, for upon our children's backs they will ensure their continued growth in a new endeavor. namely, the education of our young as if each one has the same headlight strength and battery amperage, and that presenting curriculum is just a matter of opening textbooks, depositing metaphorical concepts and assessing whether or not they stood still long enough for this unabashed deconsciounization of our human populace.