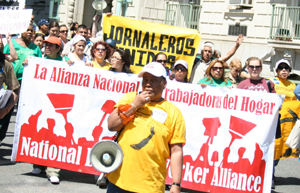 This year's Labor Notes conference will feature a daylong meeting of those involved in organizing and representing home-based workers, like Domestic Workers United, shown here at an April rally for a bill that would extend basic protections like overtime and sick leave to domestic workers. Photo: Scott Lu.

Editor's Note: One unique aspect of the Labor Notes Conference is the special meetings that allow far-flung activists to gather and share information on a rare cross-union basis. This year's April 23-25 conference in Detroit will feature a daylong meeting of those involved in organizing and representing home-based workers—challenging work undertaken in the absence of a common workplace. If you'd like to participate, contact Lsupport [at] aol [dot] com (Steve Early.)

As labor activists, direct care providers, or academic researchers, we have all been involved in aiding or studying organizing work among publicly funded personal care attendants and child care providers, plus other types of domestic workers.

Largely female, people of color, and very often foreign born, these workers have been the largest single source of new union members—more than 500,000 in the last 10 years.

In recent months, however, adequate funding for home health services in California and other states has been threatened by local budget cuts. Changes in Medicare reimbursement practices—as part of President Obama’s “health care reform”—may also affect these programs adversely. Inter-union competition for home-based workers has intensified in places like Fresno County, California, where the outcome of a vote involving 10,000 home care workers last June is still being contested. In Illinois, 3,000 Illinois workers who provide in-home care for the severely disabled recently voted to reject representation, despite having a choice between two unions on the ballot.

That’s why we think this is a particularly good time to step back and assess our collective efforts to create a “voice-at-work” for home-based workers, while improving the conditions of domestic labor generally. During the weekend of April 23-25, at the Labor Notes conference in Dearborn, Michigan, there will be a wide-ranging discussion of the challenges facing unions and workers centers as they try to build durable, effective, and member-driven organizations among men and women employed in such “non-traditional” workplaces.

We hope many will join us in shaping the agenda for this meeting, helping to publicize it, and participating. On a rare cross-union basis, we will be exchanging information about home-based worker organizing and bargaining, rank-and-file leadership development, other job-related training programs, plus on-going legislative/political campaigns for union recognition and program funding. We hope to learn from each other’s union building successes and setbacks, while identifying “best practices” that might be replicated more widely.

To make suggestions for additional content or speakers at our planned home-based worker panel/workshop at the Labor Notes conference, please contact Steve Early at Lsupport [at] aol [dot] com or 617-930-7327.

You can register now for the overall April 23-25 conference here.

Please share this invitation with union co-workers or academic colleagues in California, Washington, Oregon, Illinois, Michigan, Missouri, New York, New Jersey, Pennsylvania, Massachusetts, or any of the other states where home-based worker organizing has contributed so much to union membership growth in recent years.

*Jennifer Klein, Professor of History, Yale University, and co-author, with Eileen Boris, of Caring For America: How Home Healthcare Workers Became The New Face of Labor

Steve Early was a longtime Boston-based national union representative for the Communications Workers of America. He has written four books about labor and politics, including Save Our Unions (Monthly Review), and just co-authored a new book dealing with veterans’ issues. He can be reached at Lsupport@aol.com.
Related
Mexican Auto Workers to Choose New Union in Landmark Vote »
Mike Parker: A Labor Educator with Impact »
Auto Workers Win Direct Democracy in Referendum »
'We'll Never Be in This Position Again': Striking Deere Workers Hold Out for Better Deal »
Why (and How) Michigan Nurses Rebuffed a Raid on Our Union »

Home based worker are struggling for livelihood. Most of the workers are paid less. Although, they have to work hard from dawn to dusk they are not treated equally. It is total labor exploitation. From ancient history to modern days, we can found home based workers lifestyle is miserable whether they work in king's palace or ordinary people house. It is a real shame for us who call ourselves civilized. Government is also not showing any interest in this issue. However, we have law but it not implemented. It is Government weakness as well as ours.

Here's a few questions for your forum participants to discuss

1. how many of these "home based members" actually know they are in a union?
2. what efforts (if any) are being made to get even a simple majority of them to vote freely and fairly on their own future?
3. Are ALL their dues being returned to them as added benefit? Or are their dues dollars being siphoned off, without their knowledge or consent, to support efforts which benefit them tangentially at best?
4. What efforts (if any) are being made to devise a local structure that actually allows for member ownership and true decision making democracy?
5. Seeing as there are so many questions surrounding how these members are serviced and if, in fact, most unions simply treat them like massive herds of dues cows, is it responsible of us to be attempting to organizing even more of them when clearly all we care about is the profit margin and not their welfare?
6. Is it not actually inhuman and indecent to essentially rob the average home based workers of a portion of their hard earned paycheck when they are already struggling to survive on sub-poverty wages? And is the answer to their struggles really proving to be this new wave of unionism?

And the most important question of all -- now that we have essentially rounded up and divided amongst ourselves the last of the home based workers out there, where do we go next to falsely inflate our membership numbers?